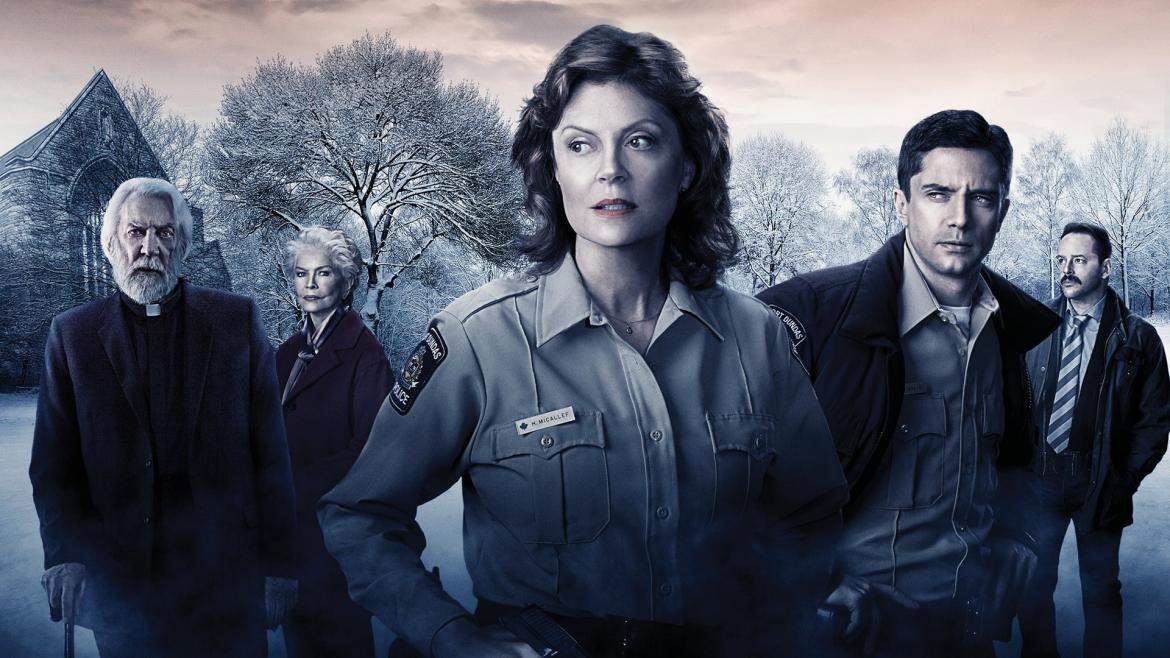 If a serial killer thinks they're doing a noble thing, does that make them more or less terrifying? This is the question at the heart of The Calling.

Detective Hazel Micallef (Susan Sarandon) works and lives in a small town where there isn’t much in the way of violent crime and her primary concern seems to be making sure that she has enough alcohol and prescription drugs to get through the day. One morning she is called to check up on a little old woman who hasn’t been answering her phone. When Hazel arrives at the scene, she finds that the woman has become the victim of a grizzly murder. A new officer comes to town in the form of Ben Wingate (Topher Grace) and it isn’t long into their investigation before they discover a string of bodies throughout the countryside. As they slowly piece together the identity of their killer they discover that he is watching them too.

As far as the genre of thrillers go, The Calling certainly leans into the gore with all its weight. In one scene in the movie, we see a corpse with its throat slashed from far away, only to have the camera return to it a few minutes later, this time much closer. As the camera lingers the audience is able to see that the cut goes all the way to the bone. And the camera work in this movie is undeniably beautiful. The film was shot by David McLain, a past photographer with National Geographic as well as cinematographer of the documentary Bounce. In his hands, even some of the worst gore looks strangely beautiful and tragic.

This Canadian crime thriller has a star studded cast from Ellen Burstyn who plays Hazel’s mother, to Donald Sutherland, in the role of a local priest. Regrettably, this film suffers from many of the same shortcomings as something like Stonehearst Asylum which, you may remember, also had a pretty fantastic cast. The plot is interesting, but not nearly as attention-grabbing as you want it to be, the effect of which is that the movie drags on without much in the way of suspense or excitement. Furthermore, for a film that centers around police officers, this movie seems to have no grasp on how police officers work. Surely there are some differences in protocol between the United States and Canada, but this film portrays them as a pretty lawless bunch. Police enter properties without warrants and don't detain witnesses so much that anyone with a casual viewing history of a police procedural will be cursing the television.

Based on a novel by Inger Ash Wolfe, The Calling tells a story that is, on its face, intriguing and seeks to deal with a lot of questions about life, death, suffering, and faith. Hazel Micallef is a character at the center of a series of crime novels by Wolfe. The problem, it seems, is one that plagues many adaptations of books, particularly one that comes from such a broad collection as this. That problem is that a lot of the depth that we are allowed to see in books cannot be translated so easily to the screen. In a book we can get inside the character’s head and get to know them and their intricacies. In the case of this movie, things like Hazel’s addiction to pills and to alcohol, as well as what seems like a relatively fresh divorce, come across as shallow and superficial. They feel like elements added to her character to elicit certain responses from the audience without really earning them. None of these things play into any sort of character arc for Hazel. The other characters are all pretty one dimensional too. Any sort of personal exploration that might take place over this series of novels is condensed down to a snapshot, effectively neutralizing them.

At the end of the day, this movie was fairly lukewarm—not groundbreaking but certainly not a terrible film either. If you’re a fan of the form, or have read the novels, you will likely enjoy this movie. For those who prefer a little more suspense and development of story, this may not be one for you.

We Are What We Are