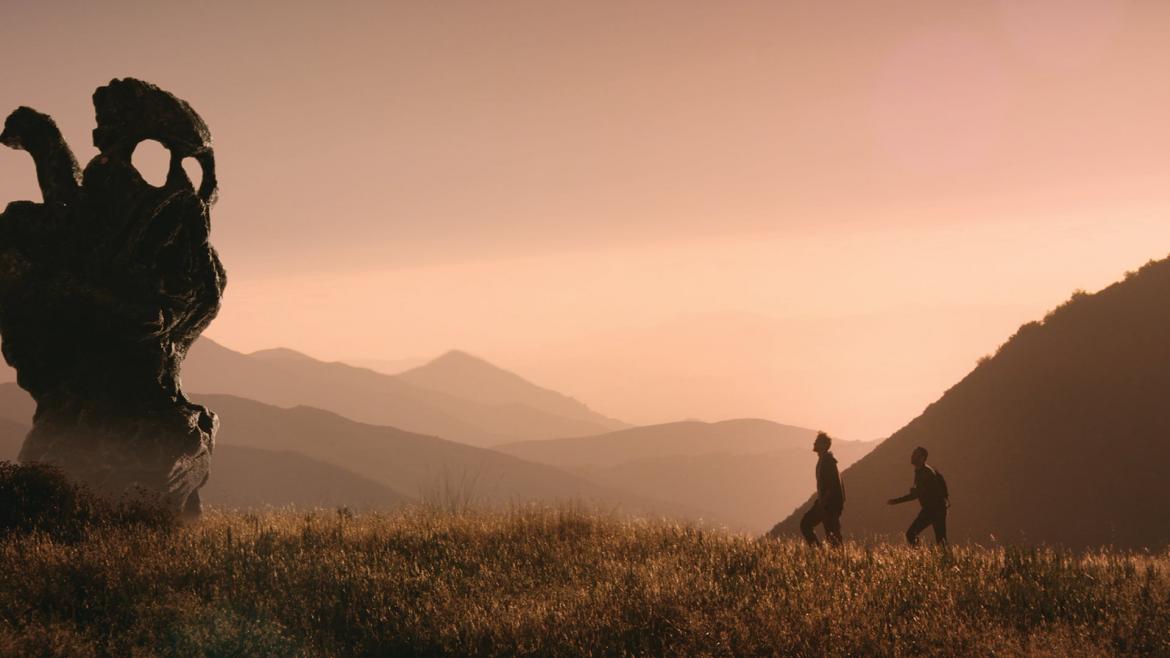 Justin Benson and Aaron Moorhead are rapidly asserting themselves as THE powerhouse duo of indie genre cinema magic. Perhaps a bit hyperbolic to throw the "genius" tag at the pair just yet, but when it comes to low budget insanity, these guys are doing it with more originality than just about any filmmaker on the market. Their latest venture, The Endless, completes a trio of gems that'll live on long after studios finally recognize the team's knack for manipulating tired gimmicks and making something entirely new and infinitely consumable.

Before jumping in, it's probably best to state that The Endless could be one of those movies some will have a greater appreciation for the less they know about it. Still, even after being blown away by the trailer, and worried that it showed too much, the film continued to amaze and surprise me with every second that passed. Benson and Moorhead accomplish so much with so little in their latest, not just technically and in storytelling, but to a deeper and more personal degree. The film's baseline premise centers on two brothers who escaped a death cult a decade ago decide and are now returning for a visit only to discover that maybe the cult's beliefs aren't as crazy as they seemed. From there Benson's writing and effortless ability to present relatable characters and inject a witty sense of humor into the madness takes over. No matter how weird or confusing the plot seems, the dense themes give the viewer more than enough to chew on, imbuing the film with a sense of mystery that inspires you to consider it for days or even weeks.

Central to the film's success are the performances from Benson and Moorhead who also star as Justin and Aaron respectively. The pair’s behind the scenes chemistry makes for a seamless transition, expressing a dynamic brotherly relationship. We are introduced to the brothers as they struggle to make ends meet while being plagued by vague memories of the cult from which they fled. More so than Justin, Aaron seems mentally underdeveloped from his time in the camp. Meanwhile, Justin experiences a growing sense of exasperation as he tries to assist in deprogramming his brainwashed brother. This frustration eventually signals the possibility Justin's memories of the supposed death cult are unreliable. Once the cult and their members are introduced the plot thickens and we get a feel for what it must be like to be seduced by the simple carefree lifestyles and friendly personalities. Just as we’re about to turn against Justin for his stubborn insistence these people are malevolent its revealed his suspicions might be accurate.

To add to some of the devastating themes at play here, Benson endured an unfathomable real-life tragedy during the course of The Endless' production--the suicide of his mother. It'll come as no surprise that suicide is just one of the themes at play. Indeed, the subject has roots that expand throughout the film's entire foundation. Often it's Benson's razor sharp writing that cuts into your brain and it's hard not to imagine where the inspiration is coming from. One line in particular that sticks out (and I'm probably paraphrasing), "You don't anticipate the ways you cut yourself off from the ones you love." The sting and deep resonation that branches out from that line as the rest of the film plays out is unforgettable.

What's more, Benson and Moorhead do something that I personally was not expecting; force me to re-examine my negative memories of their debut feature, Resolution. The creative architecture of an unexpected Benson/Moorhead cinematic universe is something ingeniously mind-blowing in its own way and adds another level of charm to the duo's arsenal. Considering the budget limitations, the ambitions of The Endless far exceed the dollar amount to pull it off--which only becomes more obvious during an effects heavy sequence at the climax. Yet the film is so rich in character and themes these monetary restrictions simply do not matter.

Delightfully deep and emotionally fierce, The Endless is the type of indie movie that reminds even the most cynical moviegoer (or artist) of the joys of imagination and the magic and catharsis of the creative process. As stated at the beginning, The Endless is perhaps a film best enjoyed with a clean slate--no preconceptions, no expectations. Regardless, once you've let it wash over you it's an experience you'll want to relive over, and over, and over.