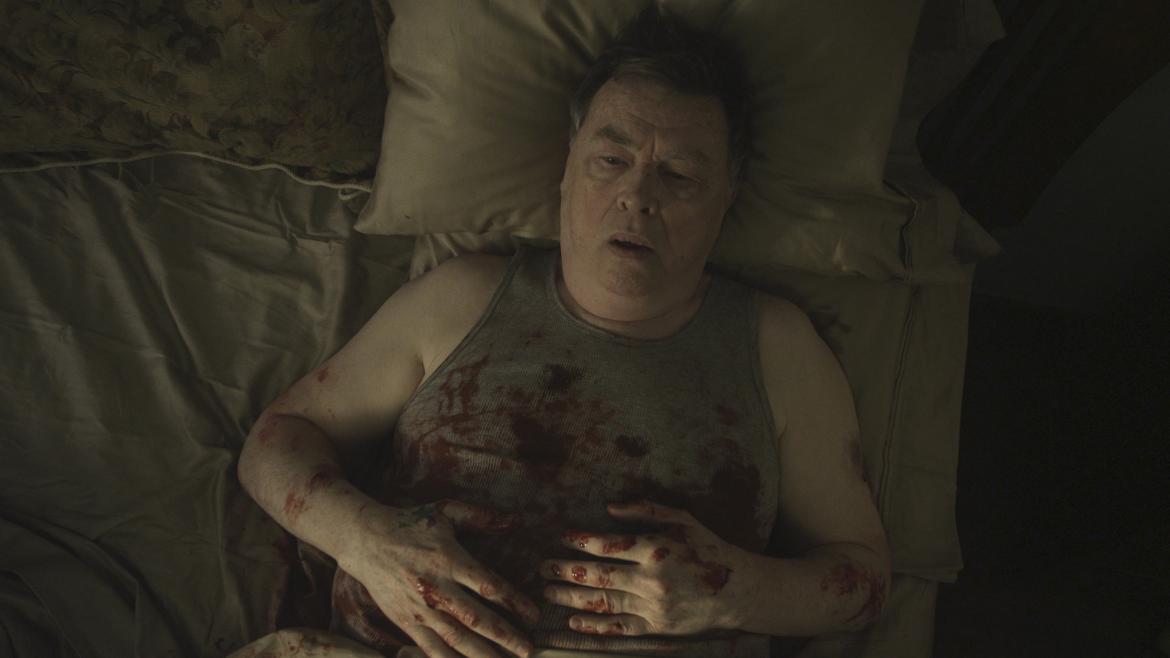 The valhalla of felled horror villains is littered with psychopaths with bizarre, even non-existent, motivations: from Annie Wilkes to Patrick Bateman, Alex Forrest to Hannibal Lecter, the cultural standard for evil-doers dictates a preference for savage over-reacters, psychotic obsessives, or irredeemably broken reflections of our ugliest selves. Origin stories are useless psychobabble, fodder for cash grab prequels or fanfic, and only spoil the fun.

Dementia dares ask a question so simple I’m surprised we haven’t encountered it more often in our anti-hero obsessed times: what if, ehhh, the bad guy, you know, actually had a point?

The film opens with the traumatic nightmares of Vietnam vet George Lockhart (Gene Jones), a 70 year old whose peaceable waking life can’t save him from recurring flashbacks of the horrors of war, particularly a comrade’s suicide and years spent as a POW. He gets by during the day making tea and playing chess over the phone with his only friend, Sam, but this scant stability is threatened when a stroke sends him to the hospital, and he begins showing symptoms of dementia.

As his troubling memories intensify, he’s forced to confront his damaged relationship with his son Jerry and granddaughter Shelby, but these dynamics are complicated by the arrival of Michelle (Kristina Klebe), a nurse from the hospital. Jerry and Shelby split at the first sign of outside assistance, even if it means leaving the vulnerable George with a little-vetted stranger, and Michelle’s many rules, initially doled out “for George’s own good,” become increasingly confining. It’s not long before she slips with ease into the role of his captor, framing him for violent episodes that she pins on his diagnoses and severing his relationships with anyone who could possibly help him.

Dementia telegraphs its twists early, setting up a bait-and-switch so obvious it overcorrects by turning important red herrings into obvious red flags. There’s enough worth exploring in its characters’ histories and relationships that it could have afforded to be far more ambiguous, and Jones and Klebe are capable leads, but director Mike Testin doesn’t feel confident enough in his audience’s patience or intelligence. I would have loved to have seen this concept spun into something more along the lines of Notes on a Scandal or We Need to Talk About Kevin (or Fatal Attraction or Unfaithful....), thrillers that revel in how dirty its main characters’ hands are and build tense cat-and-mouse games from that acknowledgment.

Instead, Dementia tries too hard for too long to convince us that certain characters are heroes or victims, while others are inscrutable meanies, and I doubt anybody watching really buys it. But it still manages to rise above its flatter, duller, counterparts, and produces solid drama from an original premise.