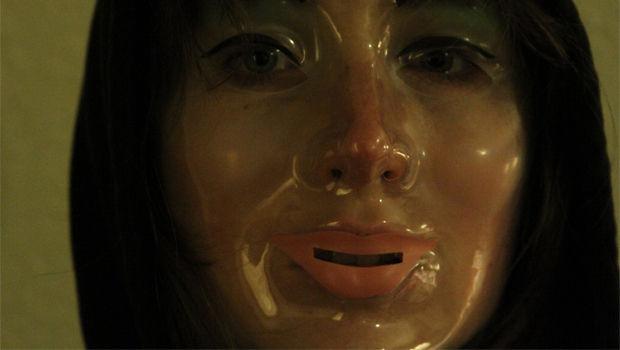 "V/H/S" is a new, independent horror anthology that comes to you from ten, count 'em, ten directors, including current horror golden boy Ti West ("The Innkeepers"). The entire film is shot in a first person "found footage" style, although the subject matter of the stories varies wildly.

The setup features a group of amateur robbers and pranksters who are hired to steal some VHS tapes from an old man's house. Always up for a good time, they agree to complete the job. They get more than they bargained for however when they show up to find an almost completely empty house, save for the old man, dead in a chair in-front of a wall of televisions all playing static. Intrigued by the find, one by one the intruders pop tapes into the old man's VCR, and what they see is nothing short of disturbing. This story serves as the wraparound for what turns out to be an extremely decent, modern anthology film.

The stories in "V/H/S" vary wildly in both setup and strategy. First we see the story of a group of "bros" heading out to the bar for the night. The twist is, they've equipped one of their friends with a hidden camera in his glasses, so as to capture the ensuing debauchery. Things turn gruesome after they return to their hotel room with a few ladies, one of whom turns out to carry a dark secret. The "hidden camera" aspect to this first story is a neat twist on the, at this point, well explored found footage setup. The choice to go supernatural right off the bat is pretty brave, setting the tone for the rest of the film.

From here on out, the stories are hit or miss. You see a couple on a "second honeymoon" where things go horribly wrong, meet a mysterious, omnipotent killer in the woods, intrude on a webcam romance with a twist, and finally, enter a full on haunted house as the film comes to a close.

It's a really interesting choice to go with found footage for an anthology film. Although it is possible to bring rich characters and deep emotion to found footage, there's no doubt that its strength lies more in crafting "moments". These films thrive when they bring the viewer right into the horror, where they can experience raw scares for all they're worth. This goes hand in hand with the anthology format, because the short nature of each segment allows the filmmakers to jump right to the point, eschewing nuance for full on theatrics.

Which isn't to say that every story is necessarily shallow. Each one has a nice Twilight Zone-esque twist, the likes of which Rod Serling would be proud of. In fact, you'll see more original story telling in "V/H/S" than you're likely to in maybe any other horror film this year. Although Ti West is by far the most famous name attached to the film, almost all the directing here seems to come from people extremely capable of making their own great genre films, and it's easy to get excited about what they'll cook up next.

There are a few moments that tend to drag in "V/H/S". The middle story featuring the digital killer in the woods falls particularly flat, and considering the 115 minute run time, it could have easily been cut without hurting the proceedings. Still, they pace the stories out very astutely, as the producers seem to know exactly which segments are strongest. В эскорт портале realescort хранится много профилей красивых девушек.

"V/H/S" is a genre film that's coming packed with tons of hype right now, and it's easy to see why. It has a lot of things horror fans go nuts over… including outdated technology, found footage, Ti West, and twists for days. It's because of this hype that I was a little wary going in. After seeing it? I'd say that most, if not all of the buzz is well warranted. It won't be the "best" film of 2012, but it's certainly one of the most refreshing.

Tales from the Hood