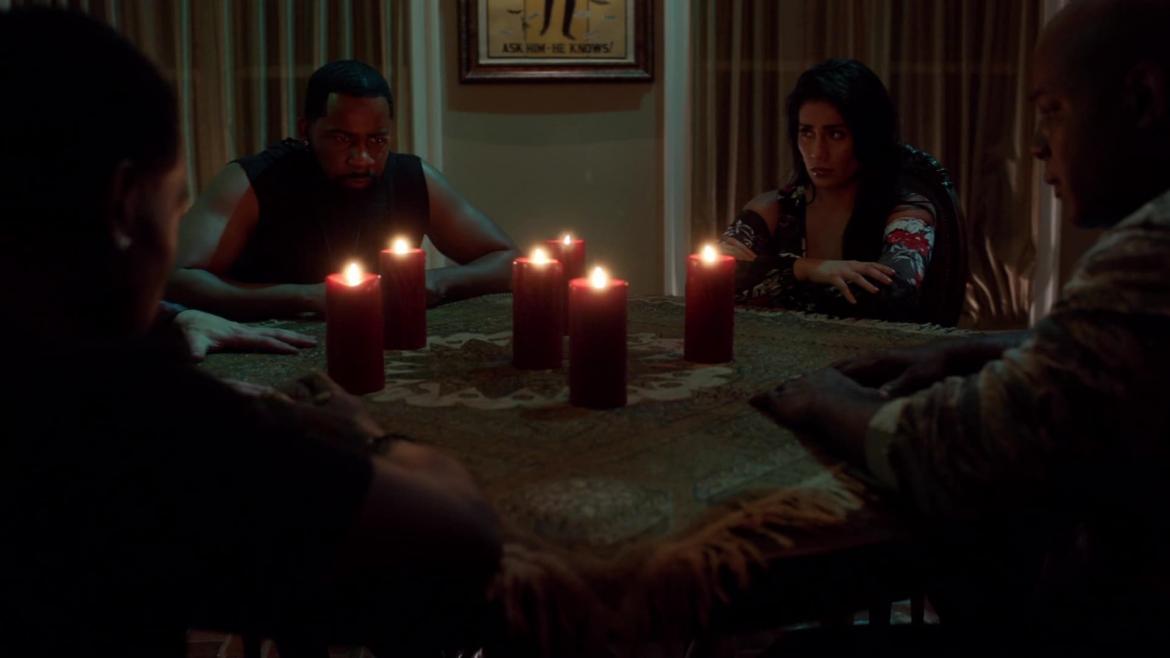 Tales from the Hood 2 (Movie Review)

Writing successful satire is extremely difficult. If the satire is too obvious then you want to scream “we get it!”. If it is too subtle then people may believe it to be the real belief of the author. Tales from the Hood 2 could never be accused of being subtle, but the important messages contained in the film are overshadowed by poor dialogue, futile comedy, and reused premises that make it a chore to sit through.

The film is divided into four stories and a wrap-around story like many horror anthologies such as the VHS series (2012, 2013, 2014), Creepshow (1982), and Trick’r Treat (2007). Each segment is an Aesopian fable that miniaturizes huge systemic issues including racism, the prison industrial complex, black lives matter, lingering effects of racial propaganda, desegregation, gay panic, sexism, date rape, reparations, voter suppression, illegal immigration, and more.

It is unclear what the film wants from its audience. If it wants to be a series of horror shorts none of them provide any horror. The scenes create no tension as none of the characters are relatable enough for the audience to put themselves in the danger they face; other than a historical figure I will mention below. There are minor practical effects that I did appreciate, but most effects were poor CGI. The “monsters” are not frightening, as they are mustache-twirling, maniacal laughing villains. We are supposed to enjoy when the hate sink get their comeuppance, but the characters act so delusional that we learn no lesson and feel nothing. Therefore, we are left unfazed even when something crazy is happening on the screen.

If the film is a comedy it fails, as there are few jokes. A character is named Dumass Beach and I won’t ruin the creative joke they make… Keith David chews a half-pound of the scenery but was saddled with disconnected dialogue and recurring references that never pays off.  I laughed most at the opening credits of the film. They looked like a kid chugging a Monster Energy drink made them in Adobe Premier 20 minutes before his computer studies presentation. After Unfriend 2: The Dark Web (2018) and now Tales from the Hood 2 we can now say a mark of a badly written film is when characters play Cards Against Humanity. Filmmakers, write your own jokes instead of relying on a card game that is only funny when your mom is playing.

I want to mention that the last main story of the film was clearly the most laboured over. The story attempts to tie many real-life tragedies - including the death of Emmett Till, the 16th Street Baptist Church Bombing, the assassination of Medgar Evers and Martin Luther King Jr. - into an It’s a Wonderful Life (1946) supernatural story. Although the cinematography and storytelling are a little better in this segment, the justification for these events and the focus on choice in the sacrifice of many of these characters undermines the story of real people that died to advance civil rights in America.

Should you spend 111 minutes watching this movie? Absolutely not! But there’s no denying the important place a film produced nearly entirely by people of color has in the cinematic landscape. It would be better to buy this film and not actually watch it. Instead you should watch the original Tales from the Hood (1995) which has a few good horror moments, memorable performances (especially David Alan Grier, Clarence William III, and Rosalind Cash) and a few less cringe inducing jokes. This film gets 1 point for some buried social commentary and 1 point for CGI skeletons.