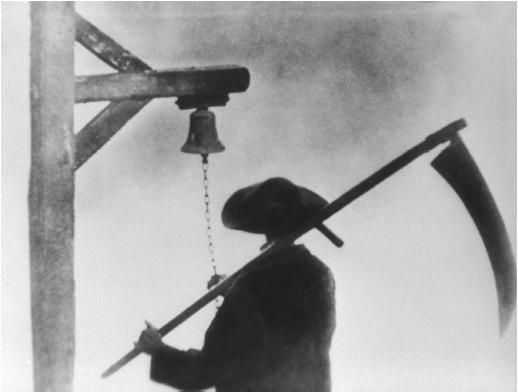 Carl Theodore Dreyer is a big name in the history of cinema, but the Danish master saw some of his most highly regarded films panned or underwhelmingly received upon their initial release. “The Passion of Joan of Arc” considered by most as one of the greatest films of the silent era was a complete box office flop as was his follow up ‘Vampyr”. “Vampyr”, Dreyer’s first talkie also found few fans amongst critics who maligned its deliberate pacing and narrative ambiguity. Completed in 1931 “Vampyr’s” release was delayed in Europe so that the American Films “Dracula” and “Frankenstein” could be shown first.

At the beginning of “Vampyr” we meet a young man named Allan Gray. We learn from a title card that he has been drawn into a private hell of indistinguishable fantasy and reality by his research into devil worship and vampirism. Gray arrives at a remote inn outside of Paris and during his first night has spectral visions of shadowy ne'er-do-wells. As he tries to settle in for sleep an old man appears in his room and gives him a package that reads ‘To be opened upon my death”. Young Allan goes roaming in the mist and happens upon a castle of shadows inhabited by an old woman and a doctor who looks like Mark Twain in need of a meal. The not-so-good doctor chases Gray away and eventually the young spiritualist arrives at the home of the old man who left him the package. In short order Gray witnesses the old codger take a fatal slug in the back.

Allan tries to save the man’s life to no avail but for his troubles he is invited to stay on by the newly widowed Mum of the estate. The recently deceased man has also left behind two comely young daughters, one of whom is ill and is being attended full time by a nurse in nun’s habit. Gray settles in and upon opening the package form the dead man he pieces together that the sickly daughter is under the influence of vampire curse. Traveling through a phantom realm within his haunted consciousness Allan Gray must sacrifice his health and risk his life to save the possessed daughter.

“Vampyr” will turn 80 years old next year. It is an early talkie made on a fixed budget and the soundtrack suffers mightily from age and lack of care. Some of the picture suffers from similar problems but not enough so to take a pass on the film. Though any recommendation of this movie should be given with the idea that you are watching what is essentially a silent film. Dreyer dealt with his small budget simply by utilizing title cards and eschewing long dialog passages. If you have an affinity for silent works then the low quality of the audio here should present no problems.

Despite a relative hronological proximity to “Nosferatu” as well as the Bela Lugosi’s “Dracula” this film utilizes a great deal more dream logic and takes a disparate philosophical approach to the subject matter. Dreyer was an unapologetic moralist and his tack here is to root the scourge of Vampirism in the plague of immorality on the family unit. In his vision certain non-virtuous dead people return to life as vampires to spread their disease amongst the carefree young. Unlike Murnau’s vampire pandemic the old lady in “Vampyr” enslaves all her victims then tasks them to infect their loved ones. Once the crotchety hag is done with her acolytes she drives them to suicide so that they might spend eternity in hell. Vampires in Dreyer’s world are lost souls who become the Devil’s left hand. So it makes perfect sense that during the dénouement Allan Gray, lost in his own spiritual sickness, must perform an act of sacrifice and envisage his own death to find the courage, emerge from the darkness and halt the demonic machinery at work in the story.

The film is pretty heavy-handed in places but the strength of Dreyer’s aesthetic trumps any preachiness and solidifies the movie as a classic from the early days of horror cinema. The mobile, gauze-wrapped camerawork by Rudolph Mate and Louis Nee creates a soft, seductive darkness that in combination with Dreyer’s Caravaggian flare for composition makes “Vampyr” a movie with imagery that film buffs will carry in their head for years to come. Add to the stellar lensmanship a sprinkle of tension on par with early Hitchcock and the glowering weirdness provided by a largely unprofessional cast and the film begins to feel like a wet nurse for the David Lynch Universe. Clever, twisting and immediate, “Vampyr” often seems like an old picture with a more modern film vocabulary. It may not have been one of Dreyer’s better received films but it has all the material necessary to illustrate why he is considered a master.