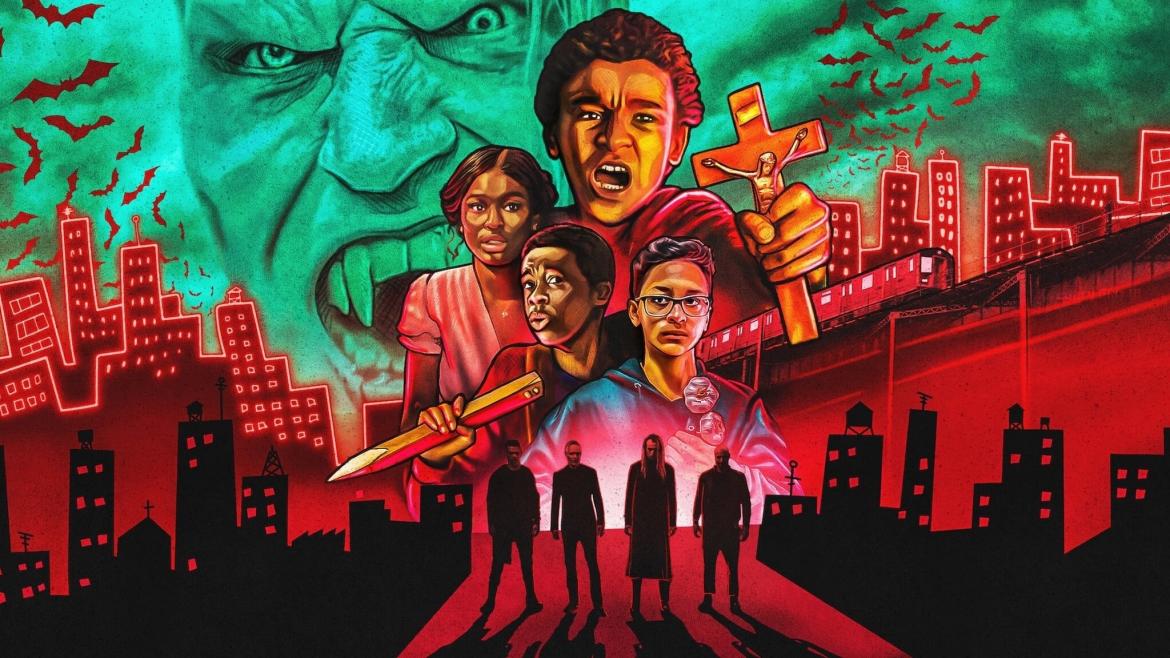 Vampires vs. the Bronx (Movie Review)

Vampires have often metaphorically represented the upper class leaching off the lower classes—for their labour, their taxes, their votes. Why do you think Dracula is a Count? Vampires vs. the Bronx, written and directed by Osmany Rodriguez, takes this metaphor to the next logical progression as vampire property owners attempt to take over the city literally and figuratively. The plot is a classic with a twist: a group of teens band together to fight a monster, but the monster, in this case, represents today’s tangible social and economic trepidation.

Miguel Martinez (Jaden Michael), also known as Little Mayor, is trying to organize a block party to save Primo, the local Bodega. After a run in between him and a local gang member, he witnesses a vampire murder that he believes is associated with Murnau Properties (a reference to the director of the 1922 Nosferatu). Little Mayor and his friends Luis (Gregory Diaz IV) and Bobby (Gerald W. Jones III), who is dealing with the social pressure of being recruited into a gang, uncover the plot by Murnau Properties to make the boys’ Bronx neighbourhood more suitable for their bloodsucking brethren.

This film presents a simplified version of gentrification. This is not meant to be insulting but an indication of who this movie is for. (Who wants to watch a highly technical film about the legal and social phenomena of zoning and city planning)? Instead the movie perfectly encapsulates the human experience of gentrification over time. We see the initial excitement of the business owner who sells her property to be reconfigured as housing, while the community suffers from a loss of accessible services and the disappearance of a community member. This dynamic keenly borrows another piece of vampiric mythos—they have to be let into this community. This is also very reflective of the story of Dracula as he moves his Transylvanian soil into the London neighbourhoods he stalks. While the film delights in the well-trodden comedy of hipsters loving products with the “artisanal” moniker, it also captures a truth about pricing businesses out of their neighbourhood. Posters for the missing people are a critique of the less dead—people of colour whose disappearances are less rigorously investigated by the police—along with being tied into the vampire plot. Some recent films could take notes on how this story seamlessly weaves its deeper social commentary into the narrative. Vampires vs. the Bronx never sacrifices its convictions or it's goofy premise—a narrow line it walks effortlessly.

I have never lived in New York, but you can tell the reverence the film has for the living quality of the borough. Rodriguez has written even the side characters to have ongoing lives outside the film. One character, Gloria (Imani Lewis), provides live stream info dumps that feel accurate to the generation that documents for their fans despite coming off as a clunky approach to exposition. Our main characters are excellently cast and believably reflect the different paths of kids on your block. The set ups for conflict are clearly telegraphed, but that adds an element of childlike innocence to horrific situations that we all appreciated from many beloved childhood adventure films such as The Monster Squad, The Goonies, and The Lost Boys.

I am not always a person that desires fun as a necessary quality in a film, but this film puts a sweet coating on the medicine of its message and I enjoyed the sugar rush. If you want a good horror film for the whole family (assuming your family is cool with vampire violence and the f-word) this is a PG-13 film that left me craving whatever Rodriguez will do next. Vampires vs. the Bronx is a must see for all Brooklyn Bombers and Transylvanian Title Takers.