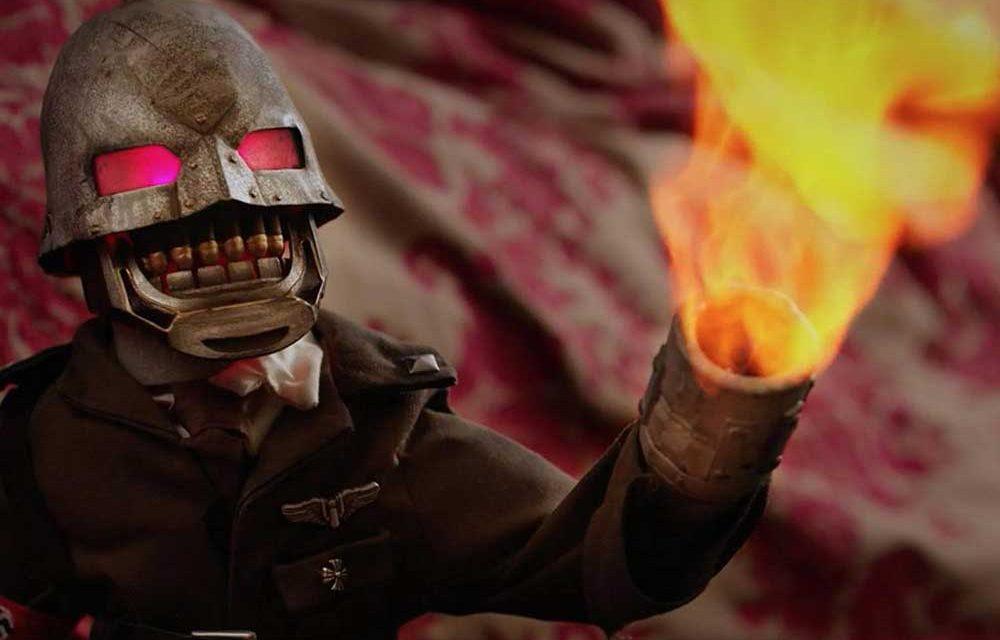 It's tough to say, unless you've recently revisited the Puppet Master series, that the franchise deserves icon status. The puppets themselves, and their many talents, indeed have a lasting impression, but the movies themselves don't seem to have the same effect for someone who watched them many many years ago as a youngster. Still, even with fleeting memories of the series it doesn't take a refresher course to recognize the latest reboot is not the Puppet Master one's foggy nostalgia might be expecting. No, Puppet Master: The Littlest Reich awkwardly squeezes together the late 80's early 90's cheese with a morbidly serious tone complete buckets upon buckets of gore. And it kind of works.

The reboot, produced by Dallas Sonnier (the man responsible for bringing back Fangoria) among others and written by S. Craig Zahler (the madman behind Bone Tomahawk and Brawl in Cell Block 99), brings back the maniacal André Toulon (played this time by Udo Kier) but injects a new twist on the puppet maker's legacy. He and his beloved puppets are Nazis and his creations were designed to hunt down and kill anyone deemed targets by the Hitler regime. After Toulon is gunned down he instructs his puppet army to remain in the shadows until years later a recently divorced Edgar (Thomas Lennon) finds one of the deranged puppets in his dead brothers belongings and decides to bring it to a convention marking the anniversary of the Toulon Murders with the intent to sell. A prospect many other collectors also have in mind. With all the puppets converging on one location they are mysteriously brought back to life and begin hacking, crushing, stabbing, and slashing their way through the hotel's guests and convention attendees.

If the plot seems light on actual story, that's not an accident. It's bafflingly unclear if Zahler's script is intentionally light on a driving narrative or if it's the film's amateurish editing that butchered what he originally had in mind. Could be both, as the minute the murderous puppets start doing what they do best the film quite literally becomes more or less a murder compilation of gorey moneyshots ripe for the horror sister site of Pornhub...Gorehub (someone should probably squat on that domain ASAP if it's not already out there). Accompanying scenes attempting to bridge these brief bits of violence together are both cheesily acted by the supporting cast and have little to no cohesion from scene to scene.

Lennon and his key co-stars Nelson Franklin and Jenny Pellicer approach this thing with a certain brand of deadpan humor, but everyone else has a stilted cadence to their line delivery. This could be a product of directors Sonny Laguna and Tommy Wiklund not having a strong ear for what constitutes trashy B-movie cheese or an inherent misunderstanding of schlocky genre cinema. It's tough to pin down what's purposeful and what's plain 'ol bad filmmaking.

So why does it work if it's so sloppily assembled? It's hard to say. On its most primal level, it's just satisfying seeing these little props dismembering people in gleefully violent glory. There's the sense of morbid curiosity to see just how creative the kills can get and how non-PC the script can be. The puppet design too, is as interesting as it ever was, taking cues from the OG gang to create what feels like early prototypes of the classics we loved in the 90's or slightly upgraded iterations. Either way, there's damn near an entire army slicing and dicing their way around this hotel, some with the ability to fly and behead their victims, some burrowing through the walls, floors, ceilings, and some using brute strength to crush their victims head.

Puppet Master: The Littlest Reich is not your father's Puppet Master. In many ways it's got the familiar bad movie vibes, but at the end of the day there's something that just feels right having these miniature little murderers in our lives once again and there's a lot of potential in the bloodier direction that Laguna and Wiklund have set the new vision of this franchise along in, even if it needs a few screws tightened here and there.