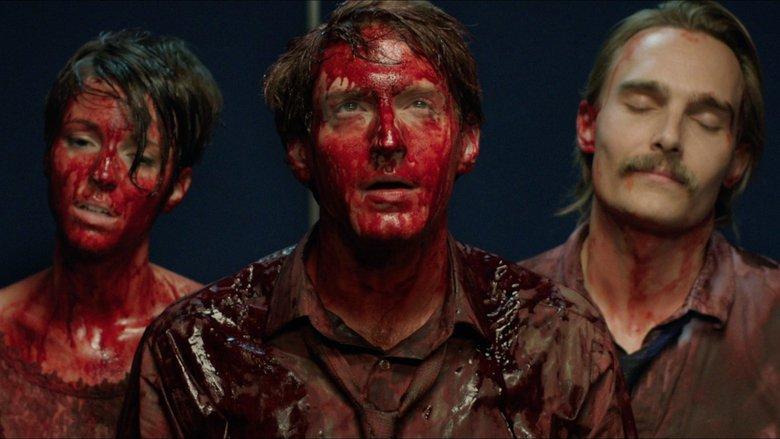 Acting Sales Manager, Evan (Fran Kranz), takes pride in his job, but is constantly undermined by his friends/coworkers. When a former school rival, Max (Pedro Pascal), is hired to take over Evan's job the office immediately undergoes a facelift. The office lights grow dimmer each day, employees are showing up paler than before, and some are just disappearing altogether. Soon Evan, his buddy Tim (Joey Kern), and the building's security guard, Frank (Marshall Givens), recognize the impending vampire takeover and must stop it at all costs.

The most surprising thing about Bloodsucking Bastards was that Kranz, who stole the show in The Cabin in the Woods is quite possibly the least funny person in the whole movie. Unsurprisingly, Pascal, who lit up the screen with charisma as Oberyn on Game of Thrones, hits the ground running and hams it up perfectly here. When all is said and done though, the film's secret weapon is Joey Kern, who is a delight every single second he is on screen- him and that terrible mustache.

There are two key things that hold O'Connell's film back from being as well-rounded as something like What We Do in the Shadows. One being that the film doesn't really try to do anything wholly different with the vampire mythology except for some clever jabs regarding a Wikipedia search and it's details on killing vampires. The second being that in the end there's not all that much in the way of plot which essentially makes it feel like a sketch comedy bit that they tried to stretch to full length. There's nothing inherently wrong with that given the comedy is strong enough to recommend, but the film as a whole could have used a bit more purpose than just corporate evil wanting us all to be pale lifeless bloodsucking shells of human beings- or even the subtleness of the tagline, "Work. It sucks the life out of you."

To say that the recent trend of vampire comedies is welcome would be an understatement. Sure the genre as a whole is still in need of some life thanks to the damage done by the Twilight series, but we are well on our way out of the dark so to speak. Bloodsucking Bastards is one more notch on the belt for genre fans and another wickedly funny office comedy with a vampire twist for fans thirsting for more office related shenanigans.