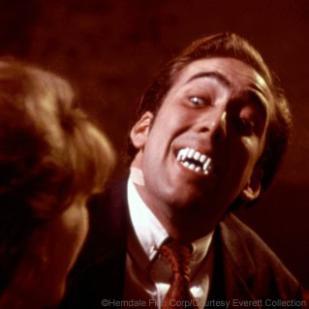 I clearly remember the first time I saw the Nicolas Cage remake of “The Wicker Man”. I was at my neighbor’s place and had convinced him to give it a shot because I had heard that it was one of the worst movies ever made. We weren’t disappointed. We were treated to some of the worst over-acting ever committed to film, a plot so absurd it involved Nicolas Cage punching out an elderly woman while dressed up as a bear and the only death scene I’ve ever seen that involved an Abraham Lincoln-esque beard of bees. Sure, it was abjectly terrible, but my God was it funny. Problem is, it hooked me. Like a tough to kick drug I kept searching for that same feeling again. I rented “Knowing”, “Ghost Rider”, “Next” and “Drive Angry” in hopes that they’d give me that same feeling, but they all feel short (though “Drive Angry” came close). Hell, I even caught “Season of the Witch” in theaters. Sure, it was for the podcast, but I know I would have been there regardless. Just when I was about to give up and admit that Nicolas Cage movies were my heroin and that they were destroying my film-watching life, something beautiful happened. Someone pointed me towards “Vampire Kiss”. Finally, since the first time I saw “The Wicker Man”, I felt that wonderful feeling again. From a distance, “Vampire’s Kiss” strongly resembles “American Psycho”. Both follow a successful businessman’s descent into madness, both take place in the ’80’s (though “Vampire’s Kiss” was actually made in the ’80’s), both hit upon themes of narcissism and sexual addiction, and both work as very dark comedies. The key difference is that I’m not altogether sure that “Vampire’s Kiss” was intended to be a comedy. Sure there are a few scenes here and there that are inherently funny, but pretty much all the humor here comes from Nicolas Cage in all his coke-fueled fury. If you’re a fan of terrible Nicolas Cage movies, this should be on your radar as “Vampire’s Kiss” is easily the most “terrible Nicolas Cage movie” movie ever made. Nic Cage plays Peter Loew, a publisher trying to get over a breakup by chasing a different woman every night. After a strange night where he takes a girl back to his place only to be interrupted by a bat (yes, Nic Cage get’s cock-blocked by an animatronic bat in this), he brings back another woman who bites his neck during the act and leaves in the middle of the night. Waking up to an empty bed the next morning, he draws the only logical conclusion after a turn of events like this, he’s been bitten by a vampire and is doomed to walk the Earth for all eternity craving blood. It was either that, or he freaked her out when he started crying like a baby and cut himself shaving the next morning. But you know, Occam’s Razor and all that, she was totally a vampire. From there, Peter unravels, finding more and more reasons to convince himself he’s turning into a vampire and acting increasingly bizarre every day that passes. The first thing you’ll immediately notice is that Nic Cage made the decision to speak every line in this bizarre accent that’s some sort of strange combination of a valley girl, a Grey Poupon commercial and The Count from “Sesame Street”. While this sounds like an odd choice, it makes nearly every line laugh out loud funny. Case in point, there’s a scene about midway through where he’s simply reciting the alphabet that is one the most hysterically over-the-top things thing I’ve ever seen. Of course, there’s also the requisite “Nicolas Cage over-acting” on display. There’s the over dramatic finger-point that he does in so many other terrible movies (side note: I’m embarrassed to admit that I’ve seen so many of his films that I know that this is a thing), the over-the-top freak-outs and more bizarre faces than an anime convention (suck it nerds!). It’s a one-man show and Nic Cage should be given some credit for making this as entertaining as it is. While something like this can be successful without the absurdist bend (“American Psycho”), Nic Cage’s performance easily lifts this above what it would have been without it and makes this a truly bizarre, enjoyable little comedy. As absurd and campy as “Vampire’s Kiss” can be, there’s actually some depth to it as well. Scenes of Peter visiting his therapist are scattered throughout, revealing that he’s getting over a breakup and is constantly chasing and trying to find another woman that lives up to the idealized version of his ex that exists into his head. His descent into madness follows his descent into sex addiction and serves as an obvious allegory for the dangers one faces when they chase past feelings, emotions and experiences instead of looking forward to what the future holds. But then again, there’s also a scene where Nicolas Cage is running down the street shouting “I’m a vampire” repeatedly while wearing plastic vampire fangs, so maybe I’m full of shit. Regardless, “Vampire’s Kiss” is absolutely hilarious and has enough depth to distance itself from something like “The Wicker Man” which is worth watching simply because of sheer awfulness. While it’s not a profoundly deep film by any means, and should really only be watched by those with a love for truly bad cinema, “Vampire’s Kiss” is a forgotten gem that deserves to be seen by all fans of campy cult films. While it’s not the easiest film to find (Netflix does not offer the disc and it was just removed from their streaming service), it’s worth tracking down a copy. Where else can you watch Nic Cage eat a live cockroach?

Therapy for a Vampire