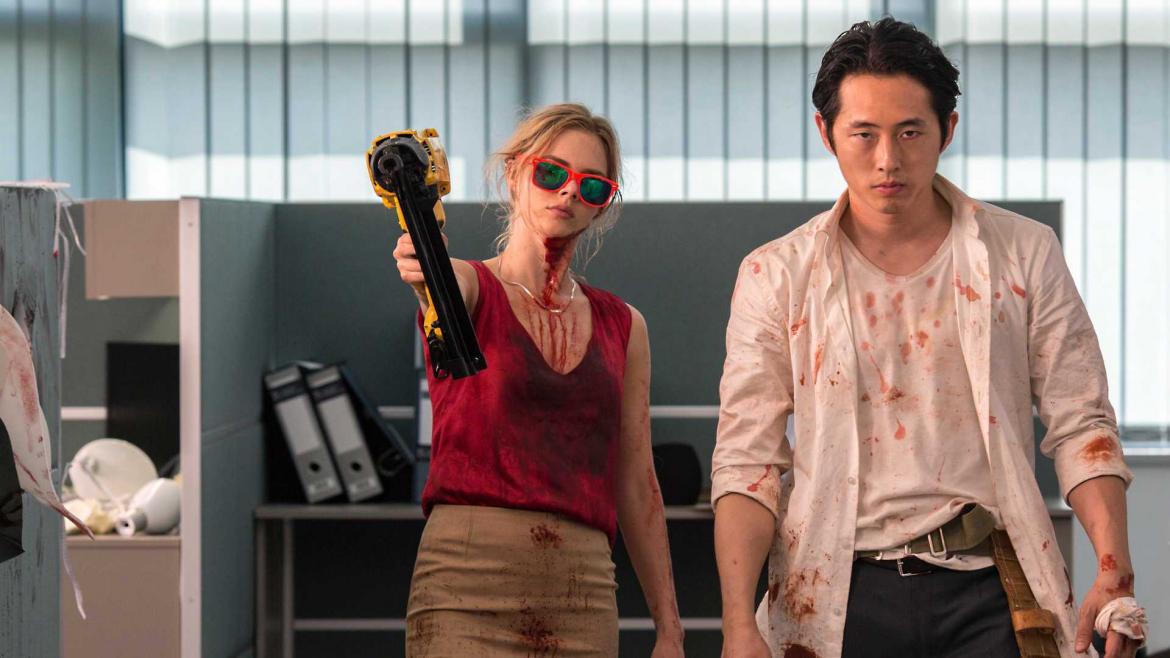 When Mayhem hit its limited release the likely narrative was that it was some kind of ripoff of The Belko Experiment from earlier in the year--when in fact it should be the other way around. Their respective plots are not identical, but through setting and circumstances make no mistake...they will be compared. Mayhem combines the charm of its two leads (The Walking Dead's Steven Yeun and The Babysitter's Samara Weaving) with Joe Lynch's hyper sense of humor and all around unhinged debauchery for a righteously fun workplace bloodbath.

Mayhem sets the stage in an office of corporate blowhards where the fictional ID7 virus, aptly labeled the "Red Eye" virus, takes control of the hosts id (the part of the brain that controls better judgment and our primal urgers). The freshly axed Derek (Yeun), who spearheaded a legal defense loophole absolving hosts of ID7 from any criminal responsibility while under the influence of the virus, teams up with a spurned homeowner (Weaving) to work their way to the top floor and enact their own brand of vengeance.

Yeun acts as the audience surrogate, navigating the chaotic halls of wild coworkers having sex and killing each while embodying the 9 to 5 malaise most of society is burdened by. Mayhem works in a lot of the same ways that Office Space does, but Joe Lynch's gleefully violent vision is a much more therapeutic experience. From backstabbing colleagues to vindictive IT reps, the corporate hierarchy isn't safe from flying nails, fists and suppressed anger.

Apart from the manic revenge quest at the film's center, Lynch peppers in knee slapping bits of humor that are indicative of the director's off kilter sense of humor. The one off lines of coworkers going crazy in the background (including a perferct Half Baked reference) and brief glimpses of ID7 victims acting on their primal instincts--such as calling death threats to your mom--often provide a unique "cherry-on-top" treat to an already decadent blood soaked treat.

Like its protagonists Mayhem moves quick and hits hard. Joe Lynch juggles chaotic primal urges and corporate satire with a jovial energy that's infectious, stumbling only in its attempts to sneak in a modicum of moral balance. Mayhem lives up to its namesake, but somehow could have afforded even more on-screen depravity.