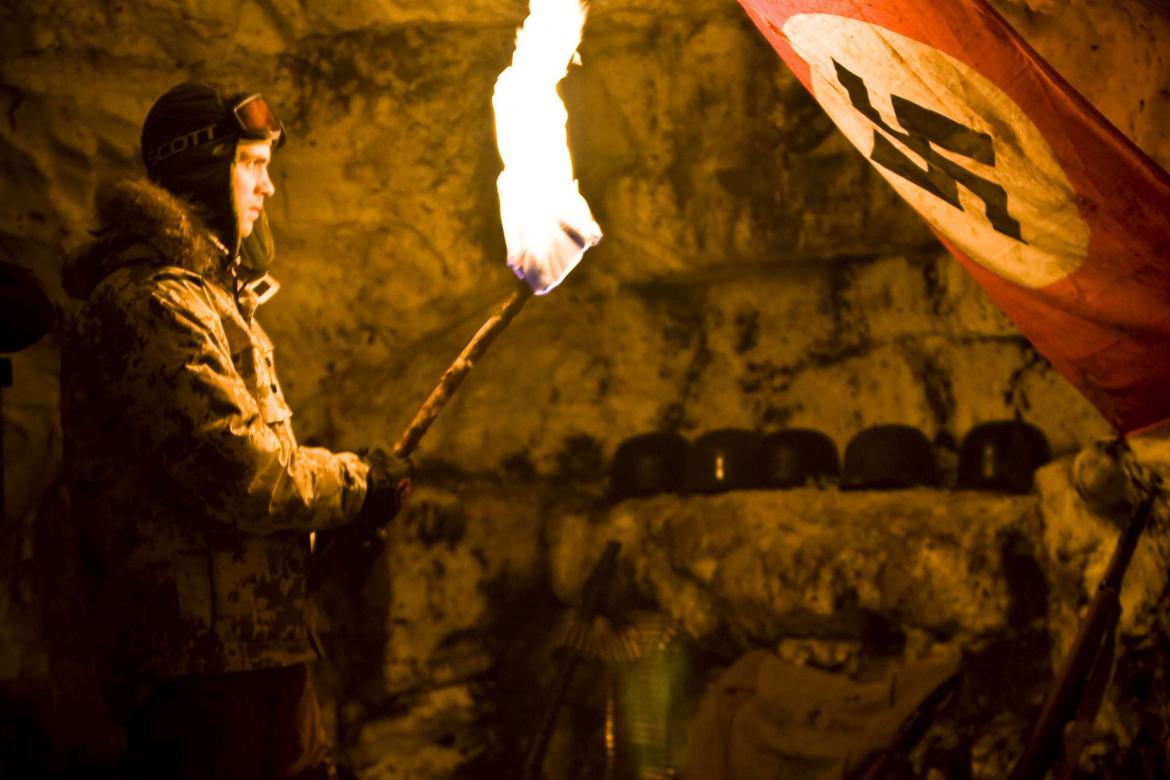 Up until two nights ago I would’ve argued vehemently that the soil of the modern zombie film needed turning over and at least 5 years of regeneration in order to produce new ideas. The garden of Romero’s making that flowered sparsely through the 80’s and 90’s exploded into hundreds of prosumer gut-munchers after the turn of the millennium. There have been some bonafide gems over the last decade but I was pretty sure we had reached the point where no one could tinker without caving to Platinum Dunes fashions and ultimately repeating the same well worn formulas. Then I decided to sit down and watch “Dead Snow”. Now I feel differently, like I want to revise the top 25 horror films of the decade list that I agonized over in December.

“Dead Snow” follows several Norwegian med-students who decide to take their Easter Break in the mountains of Finnmark. Three women and four men meet at a cabin off the beaten path and cozy up for a weekend of beer, snow machine-mania and outhouse sex. One night into their stay they are visited by a grizzled old wanderer who begs a cup of coffee and spins a ripping yarn. He tells the group the tale of an Einsatz regimen that tormented the small village nearby during WWII. Eventually Einsatz commander Herzog and his brutes were defeated by the townsfolk, but according to the wanderer their evil still lingers in the region.

This is the first glimmer of excellence from “Dead Snow”. The Wanderer is played by Bjørn Sundquist, and it is one of those brooding cameos that send anticipatory electricity through the viewer. Of course the weekend snow-bunnies ignore his foreboding and continue to party. The old man is proven right and promptly disemboweled by the zombie SS who still patrol the mountains. When the zombies show up in force at the cabin the film becomes a comedy in earnest. Chainsaws, MG34’s mounted on snowmobiles and misfiring Molotov cocktails provide comedic texture to the frantic final act.

Horror Comedies seldom work for me. For my taste, the ones that actually do succeed seem to come along at ratio of about 1:120. The subgehre's downfall is most often a miscalculation by filmmakers who believe that humor in horror can be carried by dialog. The first act of “Dead Snow” feels like it is seeding the ground for that kind of crop and it is for this reason alone that I can’t give it a perfect score. That said the opening passage is not a total failure by any stretch. It does the job of setting the table and introducing characters who aren’t stiff or annoyingly stereotypical, but this set-up is largely devoid of menace and funny content.

When “Dead Snow” decides to pick up it does so with some wonderfully realized sequences built on a nice little parallel narrative. The best aspects of these sequences are the jokes; often elaborate, always gory and above all else consistently funny. The absurdity of the characters actions are pointed out in the moment and the pay-off is big laughs. Tommy Wirkola doesn’t run from zombie clichés, he indulges them as he ladles out well timed comedy that feels like Peter Jackson meets Aki Kaurismaki.

In addition to “Dead Alive”, “The Evil Dead” trilogy, and “Shaun of the Dead”, “Dead Snow” has roots in the awkward action-delayed-reaction style of Jim Jarmusch and the mob scene humor of “The Blues Brothers”. It even has faint echoes of the first two “Friday the 13th” films. The Nazi Zombies aren’t given too much to do except stalk and attack and their motivations are never over explained. This allows them to retain some measure of threat while the movie plows into deep comic snow.

There really is nothing that should stop you from enjoying “Dead Snow”. The film is the work of an experienced humorist who understands horror well enough to make the violence and the gags equally rewarding. I can’t say whether you will regard it as a classic but if you do, you’ll get no argument from me. The film will go into the top 10 of my revised top 25 list and I wouldn’t be surprised if I eventually regard it as a must see from the decade past. Tommy Wirkola and crew have managed to restore my faith in the immediate future of the zombie film, though I’m sure its just a matter of time before Platinum Dunes comes along and sinks a claw hammer into the skull of that optimism.