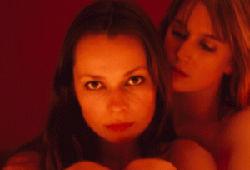 The intro to this film is so hokey that for two seconds I really liked what I was seeing. It shakes through a night club in heat sensored predator vision introducing each of Holly's friends in neon colored letters that pop up on the screen, fondly reminding me of any number of tv shows from the 90's who used a similar tactic.

Holly is making a documentary film about the goth club scene, particularly the vampire subculture, filming her “weekend vampire” friends as they dance and troll their way through the London nightclubs in Boy George makeup and fake fangs. Holly tapes them as they experience dance clubs, concerts, and blood exchanging sessions, where wannabe vampires cut each other and drink each others blood, a dangerous practice that is only reserved for the hardcore.

While filming her documentary, Holly meets Vicki, who has also been filming her from afar. They become involved in a passionate relationship that includes a heavy dose of voyeurism. Holly's house is decked out with cameras which she uses to document everything that happens there as a form of diary. After spending all of their time together it becomes clear to Holly that Vicki is a real life vampire. Although Vicki admits to killing off two of Holly's friends, Holly still helps her vampire lover by raiding hospitals for blood so that she can survive, but doesn't know exactly what she is getting herself into when she agrees to help, and things spiral farther than she ever imagined.

All of the film is shot from either a handheld camera perspective or surveillance camera footage, which I surprisingly didn't find that annoying. The quality was good enough to not be distracting and most of the shot compositions were interesting enough to keep my attention. Holly's diary cameras that are set up all over the house also help to change the perspective every once in a while. There is also a few scenes of video chatting that Holly does with a close friend, which was an interesting way of interweaving different perspectives, but which I had a hard time understanding until an hour into the film, because of poor sound quality.

This film suffers from many things. First, the sound quality is atrocious. Most of the dialog is unrecognizable towards the beginning of the film. The club music is way too loud and while I am unfamiliar with the goth music scene, it all just sounded like variations of Bauhaus songs. Secondly, this film is just completely ridiculous. If that television show from the 90's, “First Knight”, and Stephanie Meyer came together to write a lesbian vampire love story, you would have “Vampire Diary.” If you watch it, you will understand. This film will only appeal to hardcore vampire lovers, or should I say, lovers of vampires, and goth teenagers. All of this being said, it wasn't as painful to watch as I expected. I had planned to do other things while watching the film, but ended up spending the entire hour and a half giving it my full attention. Third, many of the performances are blah-worthy. Holly's friends are whiny enough that their deaths are welcomed. I had a particular disdain for the character Haze (Kate Sissons) who can be recognized by her permanent scowl and teardrop makeup.

Even though much of the dialog provokes massive eye-rolling, and the love story between Holly and Vicki becomes so soggy around the middle that it's almost unbearable, the story had an interesting enough twist where I wanted to see what happened next. Also, the actress who plays Vicki (Anna Walton) gives a decent enough performance and will be recognizable from “Hellboy 2”, in which she played Princess Nuala. The actress who plays Holly (Morven Macbeth), is less noteworthy and thankfully stays behind her handheld for large sections of the film. There isn't enough gore in the film to please even a moderate gorehound as the relationship between the two females is the main feature here. It's a love story after all, that just happens to include a vampire.