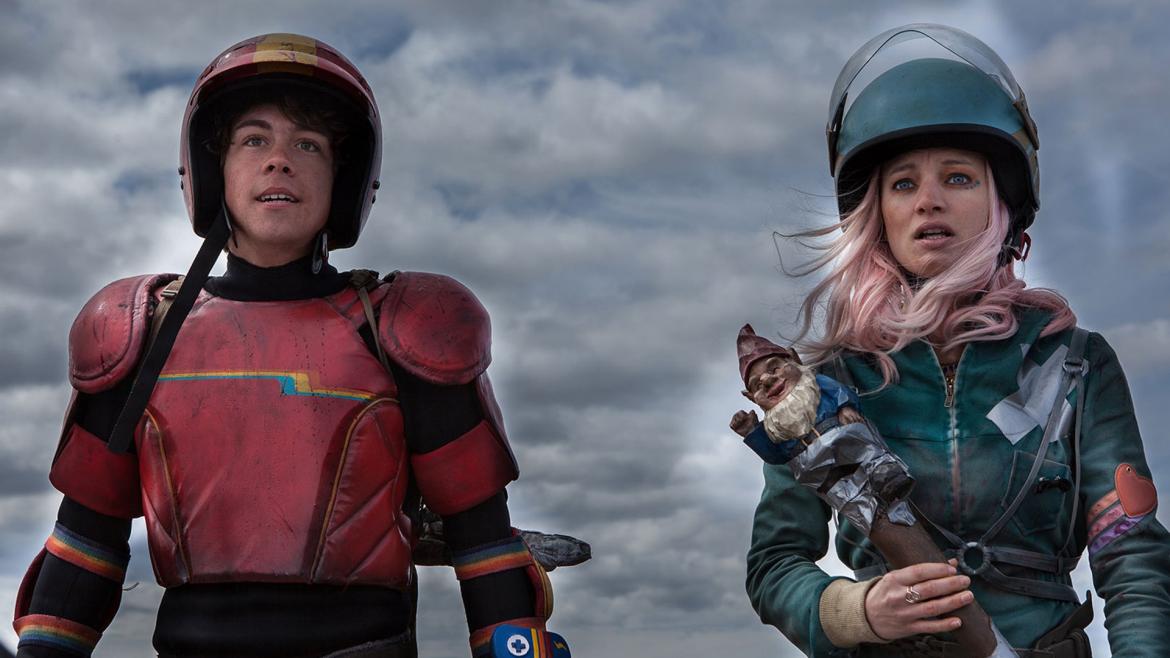 There are a whole lot of movie geeks out there craving that kick in the theoretical nostalgic nuts. However, what most Hollywood execs don't get is that it doesn't always have to be a remake, nor does it have to be a slapped together sequel that screams cash grab as opposed to genuine sentiment to the property. Those same execs should pay attention, because Turbo Kid is just the right type of throwback nostalgia we all need and what's more, it's a completely original take- well with some specific pop culture inspiration.

Set in the post-apocalyptic wasteland of 1997 a kid (played wonderfully by Munro Chambers) spends his days scrounging for trash to trade for goods and a hard to come by commodity, water. By chance he meets Apple (Laurence Leboeuf), an annoyingly cheerful gal who has decided to be the kid's best friend- whether he likes it or not. However, as their friendship blossoms Apple is kidnapped and taken to the fortress of a tyrant by the name of Zeus (a scene chewing Michael Ironside), who has less than upstanding plans for the people he takes hostage. To bust Apple free the kid stumbles upon an abandoned spacecraft with a suit capable of blowing people to bloody bits and pieces, so he suits up to get his friend back and settle a personal score with Zeus.

It's not hard to tell what kind of limited budget that Turbo Kid's trio of filmmakers were dealing with, which only makes what they've accomplished here that much more impressive. Sure, the special effects won't stand up to the likes of today's blockbusters, but the film has more heart and passion than almost anything we see dumped into theaters on a regular basis. It's that heart that makes all the film's flaws charming as opposed to cringeworthy. As a throwback to 80's science fiction and action flicks the film has everything you would come to expect- complete with over-the-top violence and nods to films that came before it.

Charm is Turbo Kid's secret weapon and it's a doozy. In spite of the fact that the film goes on maybe just a little longer than it needs to it's the spirit of the relationship between the kid and Apple that gives this movie the heart it needs and it's more enough to keep people coming back for more. If that's not enough, the script is littered with hysterical references and over-the-top violence that matches the sense of humor on display. The final battle alone is enough to fill the laugh and gore meter of most full length movies.

The film's synth score acts as the exclamation point at the end of this love letter to movie nerds across the board. Turbo Kid has more heart and soul of most blockbusters standing against it and will send audiences out pew-pewing their best laser noises for days to come.