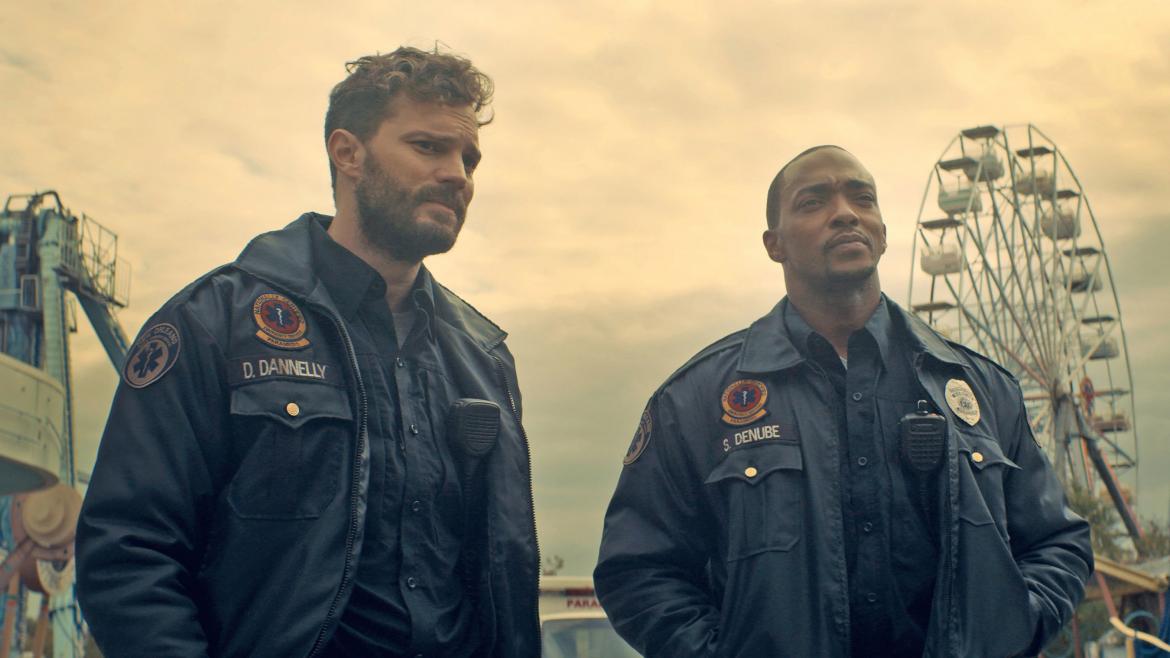 Justin Benson and Aaron Moorhead are not just two of the brightest stars currently working in independent cinema, but they are also too talented for the Hollywood machine to chew up and spit out. In the duo’s latest feature, Synchronic, they have found a more accessible version of their high minded sci-fi. The result is a stylish entry point for new viewers of their work while in no way tarnishing or watering down their brand of heady chaos.

Synchronic follows two paramedics, Dennis (Jamie Dornan) and Steve (Anthony Mackie). While the pair goes about their job, they begin to encounter a series of gruesome deaths and disturbances involving a psychedelic designer drug known as “Synchronic” -- a drug, it is said, that blurs the line between time and space. When Dennis’s daughter Brianna (Ally Ioannides) goes missing following another event tied to the drug, Steve takes it upon himself to conduct a series of “experiments” by ingesting Synchronic and documenting its effects in order to gain clues that may lead to Brianna.

What continues to ground Benson and Moorhead’s films is that alongside their technical inventiveness is a story firmly anchored in human emotions. Benson’s script, combined with the co-directorial vision of his partner, Moorhead, presents a gritty and bleak picture of a New Orlean’s drug scene as we get to know our two leads. Dennis is knee deep in marital troubles while focusing on Brianna's future. Steve is dealing with a bachelor life that includes long nights of drinking and being hungover (plus some other issues which come into play later in the film). In spite of the personal turmoil depicted, the filmmakers (and their characters) never lose their sense of humor. One could say Benson and Moorhead’s films are primarily about these types of coping mechanisms -- the behaviors or traditions we rely on to lift us up when we are at rock bottom. Synchronic may focus on a trippy drug with a sci-fi bend, but at its heart the movie is truly about friendship and the good natured ribbing between Dornan and Mackie’s characters keeps our feet planted and our heads in the sky.

When Brianna goes missing, the filmmaking duo’s knack for weird sci-fi shenanigans goes into full effect as Steve begins to experiment with Synchronic. Though stunning at times, these sequences tend to dampen the emotional proceedings in order to assuage those hankering for trippy spectacles. The give and take of risky ideas like this comes with the territory. The film could have easily been a 2 ½ hour epic complete with Nolan-esque twists and turns, a booming score, and more than enough time to over explain every aspect of the time bending drug. But this is not the form in which the filmmakers find themselves. At approximately 1 hour and 40 minutes Synchronic ticks along quickly though it never quite finds a final balance between visual inventiveness, characters’ personal dramas, and the very real history of the American South.

Benson and Moorhead’s movies do not rely on big emotional performances and Synchronic, despite all its high concept, continues the trend. Emotions are dealt with in layered, authentic ways. The sci-fi effects of the drug are an unbelievable phenomenon that characters take in stride, but ultimately the focus is on their humanity. The film finds paths to discuss addiction and drug epidemics through a relatable friendship and partnership. As the lead, Mackie carries the film well as he navigates complex sequences during his search for Brianna and his personal demons weigh heavy on him. Simultaneously, Dornan remains a stabilizing force in the friendship and their dynamic rings true throughout.

Synchronic entices the audience with a promise of a mind bending sci-fi premise with trippy visuals but Benson and Moorhead deliver in softer ways similar to their previous work. The film is deceptively understated emotionally, but still delivers all the weird and wild spectacle fans of the filmmaking duo have come to expect.