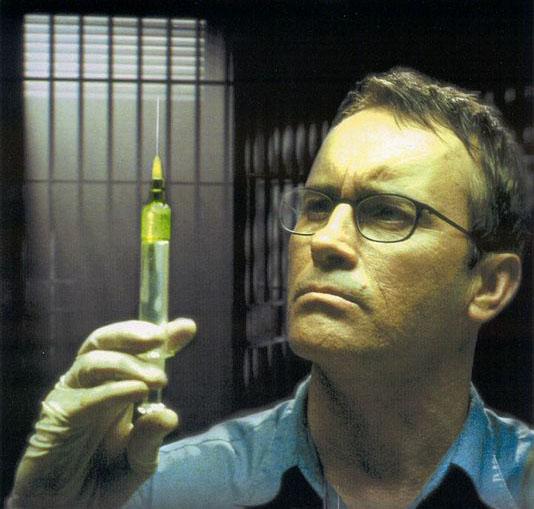 To be honest, I come into this review with a unique perspective on the "Re-animator" series as a whole. Although I dug the original, I can't help but feel that it's a bit overrated. Also, I got a hearty kick out of the first sequel "Bride of Re-animator," which is strange because I seem to be the only person in the WORLD who liked it. With that said, although it offered a few treats I was mostly disappointed with this trilogy maker.

In this sequel, we find that Herbert West has been sent to prison, after a botched reanimation that ended in a murder. 13 years later he comes in contact with a young medical student who has been positioned at the prison as the doctor. Throughout the course of the film, we come to realize that this young doctor has done everything he can in order to land a job at the prison, just so that he can come in contact with the infamous Herbert West. Reanimation hi-jinks ensue.

First off I must say that I was not terribly impressed with the plot. Just like the first sequel, this one makes no bones about the fact that it's not giving you any answers from the last one. Moreover, the story that they concoct to explain how West ended up in jail is pretty lame to say the least. Before I saw West on screen I thought I had mistakenly popped the wrong movie in! Things don't get much better once we get to the prison, because that's where we're introduced to a lackluster cast of supporting characters.

West's new "assistant" (a de-facto Dan Cain) just doesn't seem to fit into this movie. You mean to tell me that this kid went through 8 years of med-school and then took his residency in a prison JUST to get a chance to work with West? For some reason I just wasn't buying it, and it didn't help his case that his idea of acting is screaming like Al Pacino. You're not Pacino kid, so don't quit your day job as Devon Sawa's body double.

Then of course they throw in the obligatory romance (gotta have something to get on West's nerves right?). The biggest problem I had with this - besides it being forced and unbelievable - is that it takes up WAY too much screen time. I rented this movie to see Jeffrey Combs hamming it up as Herbert West again, not to see a romance between his assistant and a badly dubbed Spanish actress.

You would also expect a "Re-animator" flick to be gory as well... wouldn't you? I think what happened here is that they tried to pull this concept off without enough money to do it the right way. Besides a neat little 'missing-jaw' effect at the beginning of the flick, there isn't really any sloppy stuff to speak of until the finale. I will admit though that I enjoyed some of what was done during that portion. I'd say the thing that stands out in my head the most was a nifty trick where a character's fingers were contorting back and forth (including the WRONG way). The whole "Severed-penis vs Rat" fight was also mildly amusing... but even that was just something tacked on to the end credits.

There was another MAJOR thing that bothered me here, and it's something that might not be apparent to all on the surface. Filmed in Spain by Fantastic Factory, the film felt exactly like it was set in Spain. 90% of the actors in the movie were Spanish, and even the 2 obligatory American people that were thrown in didn't do anything to fix the feel of this film. Besides the confused setting, Yuzna just fails to create any of the palpable atmosphere that made "Bride" so appealing to me. He's not helped by his actors' obvious accents, or their struggles to hide them for that matter. They should have just called the movie "Herbert West Goes To Spain"... but then again, I wouldn't have liked it any better.

I will finish this negative review by giving major props to Jeffrey Combs. He is the heart and soul of the "Re-animator" series, and I will say that it's cool to see him back in his lab coat again. Combs is obviously relishing every second that he has on screen here, but then again perhaps that's because he doesn't get that many! Seriously though, I think despite this film's poor performance that Combs (as Herbert West) will always be remembered as one of the cooler horror icons that was born out of the 80's. West-o-philes will enjoy the film for what it is just to get a glimpse of their man. Perhaps if Combs had been brought in on the creative process (like he wanted to) then this movie would have gone in a different (and better) direction.

So if I had to pick one word to sum up the experience of viewing this film, it would have to be "disappointing." If they ever make another "Re-animator" film (and trust me, they left it open so SOMEONE'S bound to be considering it) my recommendations would be to bring in all new talent (except for Combs), and film it in America! My real suggestion though is to leave this series alone, because I don't think that anyone is going to put up the money necessary for any future sequels to rise above mediocrity.