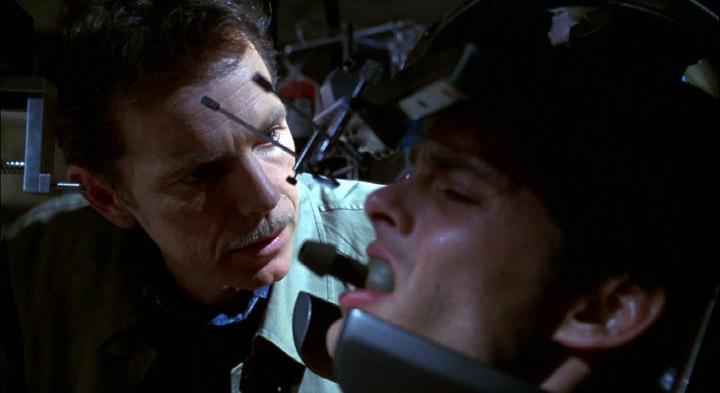 Disenfranchised and precocious youths were a popular character study of horror films in the 90s. When done right – they were fun little jaunts through the horrors of high school and adolescence. Unfortunately, there were a lot of films that thought that following that formula would always produce a winner, and Disturbing Behavior is a perfect example of that kind of failure.

Cradle Bay is a town that understands its future is built upon a foundation of strong children who understand the value of being a good citizen, but not everyone agrees with the means by which the students are trained. Gavin (Nick Stahl) is a loner who at one time was best friends with the majority of the ‘popular’ kids, who comprise the golden standard of Cradle Bay, “The Blue Ribbons,” and is convinced they are all being controlled by a sinister force.  When Steve Clark (James Marsden) moves into town after the untimely death of his older brother (cameo by 90’s heartthrob Ethan Embry), Gavin finds an ally in the newcomer. Along side his friends UV (Chad Donella) and the wrong side of the tracks beauty, Rachel (Katie Holmes) Gavin attempts to infiltrate the Blue Ribbons’ parent meeting to recruit new members. Realizing his parents have sold him out, Gavin is sucked into the Blue Ribbons’ cult and turns his back on his friends. Steve and Rachel knowing Gavin would never become a blue ‘bot on his own, strike out to investigate the evil genius behind the plague. The further Steve and Rachel look past Cradle Bay, they more danger they find.

Released in the shadow of the success of Wes Craven’s Scream, Disturbing Behavior tried its best to deliver a clever and smart horror film, but failed pretty miserably. Despite a plot line that owns more holes than a block of Swiss, the film is just a jumbled attempt at cashing in on a satirical flip on the drama of high school trope. Ripe with violent outbursts and the intense objectification and sexualization of high school aged kids, Disturbing Behavior attempts to just ride high on the popularity of teenage rebellion movies in the horror industry and doesn’t really try to do anything new or even what’s already been done well. Though relatively enjoyable as a trip down memory lane for actors who have gone on to bigger and better things, it’s a decent watch for a few ridiculous laughs.