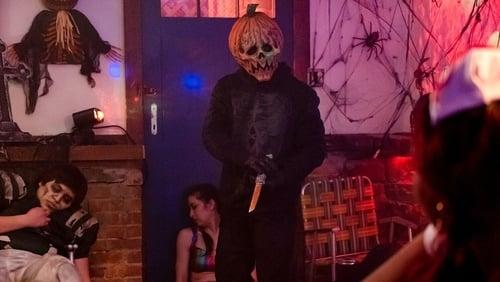 Halloween season is all about the lead up to the 31st when hordes of eager costumed kids ring the doors of neighbors and strangers alike, asking that one simple question, "Trick or treat?" Patrick Lussier returns behind the camera to give audiences his own answer this spooky season with the atrocious Halloween themed slasher, Trick. A movie with nothing but utter contempt and disregard for audiences' precious time. It is the plain t-shirt with a single strip of duct tape that says "COSTUME" of Halloween horror movies.

Trick follows the exploits of a police detective Mike Denver (Omar Epps) who is hunting a teenage serial killer named Patrick Weaver, who people simply call “Trick.” One night on Halloween Trick suddenly snapped and murdered a number of fellow classmates at a party playing "Spin the Knife" (what's the worst that could happen?). Following the attack, Trick disappeared from a hospital after being shot multiple times and presumed dead. However, every Halloween a killer emerges in the area to go on a killing spree bearing the same MO as Trick and Detective Denver is determined to put an end to the reign of terror.

Patrick Lussier is a filmmaker with a presumed love of horror's past. He has helmed the My Bloody Valentine remake, a slew of Dracula movies and so on. Trick is a slasher that feels imprisoned in the late 80's early 90's slasher purgatory. Lussier, who co-wrote the film with Jason X scribe, Todd Farmer, employs a number of tired slasher cliches without injecting any sense of irony or knowing tongue-in-cheek subtext. The rote material is presented plainly, telling audiences to take it or leave it.

Outside of the script, the direction feels un-refined, boring, and easily upstaged by even the most underachieving film school drop-out. A depressing fact given Lussier is capable of more. There's never a moment in Trick that feels like anyone really cared what the final product would look like.  If you can ride out all the relentless waves of beaten to death slasher tropes and boring character development you can be treated to a final act that goes for broke and delivers one of the most hilariously hamfisted twists which proves to be a gift that keeps on giving during the laugh riot finale.

We want to believe that no one sets out to make a bad movie, and objectively that may indeed be the case here, but Trick is aggressively mediocre at every turn. Neither fun nor meaningful, Trick is exactly that, a practical joke perpetrated by a filmmaker out of touch with the genre he primarily toils in. But hey, at least Lussier nailed the punchline.