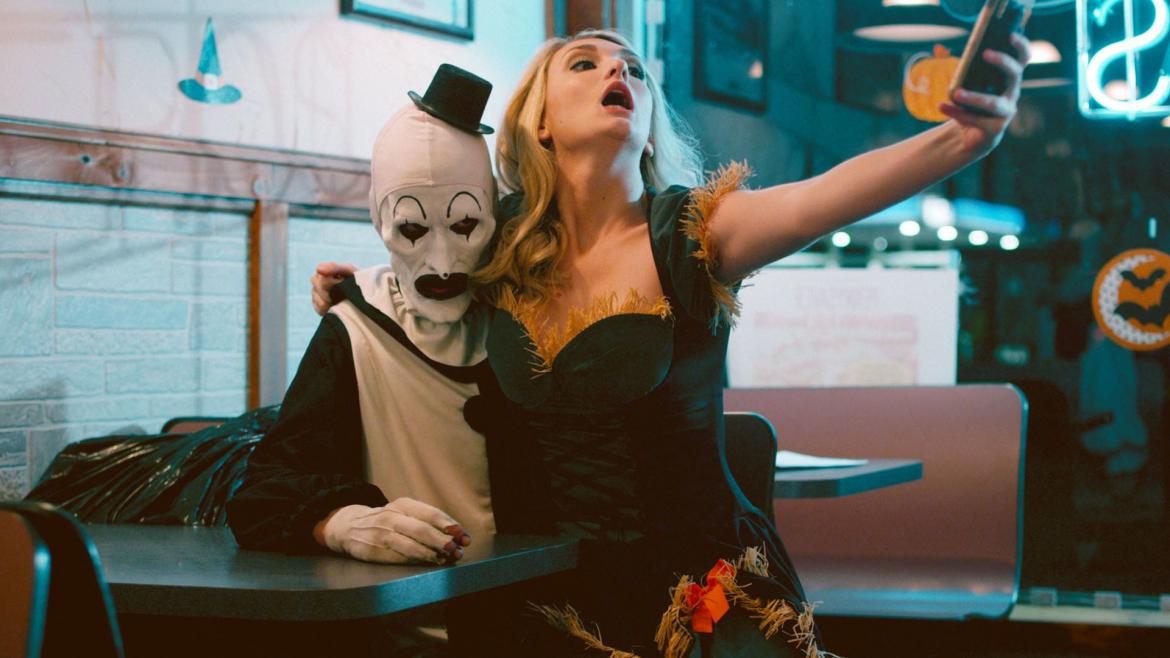 Throwback is something that gets tossed around a lot, especially in the horror community where everyone opines for the glory days of axe wielding maniacs in video nasties. Those are the sort of films that look better through the lense of nostalgia than fresh eyes. That being said there are never a shortage of new films trying to emulate the past.

Terrifier is certainly one of these films. As plots go, this one is about bare bones as a bleached skeleton. The whole thing kicks off with an interview with a severely disfigured woman who is on a talk show to recount her tail of being the sole survivor of one Art the Clown (David Howard Thorton). You may be shocked to hear that Art isn’t such a nice fellow. And we discover he may still be alive. We then move to Halloween night were some poor girls, Tara (Jenna Kanell) and Victoria (Samantha Scaffidi) find themselves crossing the path of said clown. That’s it. Your run of the mill, killer clown slasher film. And even what might serve as a twist at the end will probably leave you with a shrug of your shoulders; not so much because you guessed it, but because you didn’t muster enough care to even consider that one might exist in a film like that.

As far as the rest of the film goes—this delivers exactly what you’d expect it might. It’s vile, demented, and more than a little misogynistic. The characters are dumber than the dumbest. This is the sort of film where the heroes hit the bad guy once and then run away to hide and wait to be caught and dismembered. This is the sort of film you might expect to find in the bargain bin buried beneath a thousand other DVDs destined for the landfill. The difference is that Art the Clown is a horrifying, insidious, force of nature.

Sure, you’ve seen killer clowns. Lots of them. Some are a little funny. Some demonic or alarming looking. Some might even be creepy. Art is all of those things and more. He appears like some pale white vulture beneath clown makeup pantomiming and maiming his way through an abandoned building. He’s funny, sort of. In an exaggerated way he may throw up his hands or give a big giant cheesy grin, but all this serves to build on an uneasy inescabale horror. There is something truly unsettling about this performance. And it all goes to show that execution trumps originality more often than not.

There is an earnestness behind the acting of Art the Clown that makes this character the potential to be a classic if given enough room to breathe in the psyche of horror aficionados.