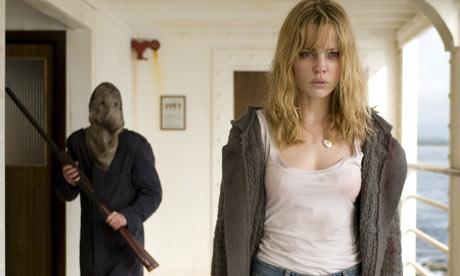 With Neil Marshall having moved on to big mainstream action pictures and Danny Boyle becoming an Oscar-winning millionaire, Christopher Smith seems to be gunning for the spot of the UK’s resident master of horror. His first two films, “Creep” and “Severance”, breathed some much-needed life into the seemingly moribund British horror industry. His latest feature “Triangle” might have been passed over for a US cinematic release but it has the potential be the kind out-of-nowhere sleeper DVD hit that builds a following through word of mouth like “Donnie Darko” or “Fight Club”. This is the kind of film that practically requires more than one viewing followed by fevered discussion and late-night theorizing.

Much like the aforementioned films, “Triangle” is a puzzle movie. Also much like those films, it’s nearly impossible to discuss the plot at any length without delving into spoiler territory. The movie isn’t what it appears to be on the surface so I’ll try to lay out a brief, spoiler-free synopsis before I get more in-depth and dip a toe into the spoiler pool. Melissa George plays a single mom of an autistic child who goes on a sailing trip with a few other people. The sailboat is capsized in a storm and the castaways find their rescue in the form of a seemingly abandoned ocean liner. On board the cruise ship, they find indications that they are not alone and encounter a masked killer. That’s not what the movie is about, though. There’s much, much more going on but for those of you who want to approach this movie spoiler-free and with no preconceptions, I’ll just say that if you are a fan of brain-melting movies that might leave you scratching your head after the first viewing, then you should stop reading now and go check out “Triangle”.

If you’re still reading, be warned that minor spoilers lie ahead. I’m not going to reveal anything major like the ending or my interpretation of what happened but I will discuss some surprises that happen fairly early on in the movie.

“Triangle” is not only a twisty puzzle of a movie, but it’s also packed to the gills with red herrings. The title combined with the fact that the movie takes place on a ghost ship off the coast of Florida will cause most people to expect it’s about the Bermuda Triangle. It’s not (as far as I can tell). The masked, axe-wielding killer on the DVD box might lead some to think this is a slasher movie. It certainly borrows some elements from the subgenre, but that’s only a small part of the film. Early on, there are some indications that this is a time-travel film. I don’t think that’s the case even though “Triangle” shares a lot of elements with films like “Primer” and “Timecrimes”.

So what is “Triangle”? I’m still not sure. I have to admit that the first time I watched it I thought it was a decent movie but I wasn’t overly impressed. In particular, I thought there were some massive plotholes and that the script, though meticulous in some details like the timeline, was just sloppy in others. The closest experience I could compare it to is the first time I saw “The Prestige”. In the cinema, I thought the ending was weird and cheap. It wasn’t until I had digested the film a bit, talked it over with some people, and read some analyses that I realized it was actually kind of brilliant and on second viewing I loved it.

I had a similar experience with “Triangle”. I thought I understood the movie and that it had a few plotholes and contrivances until I found some viewer interpretations online that completely changed my conception of the movie and left me impressed at just how well written the film is. It’s almost deviously subtle in the way it ladles out a few hints and breadcrumbs but never explicitly explains what is really happening on and off the ship, which is a nice alternative to the excessive handholding that often accompanies this type of film. While most viewers have fallen for the red herrings and are trying to piece together the time travel element, they’re missing the actual clues they should be looking for.

“Triangle” is a singular film that deserves a cult following and will no doubt spawn numerous sessions of late night dissection and careful research of the IMDB discussion boards. I’ve watched it twice in the past week and I’m still not sure if I completely understand what’s going on, or if I ever will without the help of a detailed timeline, extensive visual aids and Christopher Smith himself beating me over the head with the screenplay. What I do understand is that “Triangle” is a fiendishly clever movie that tricks you into thinking you have it all figured out only to pull you in much deeper than you ever expected.