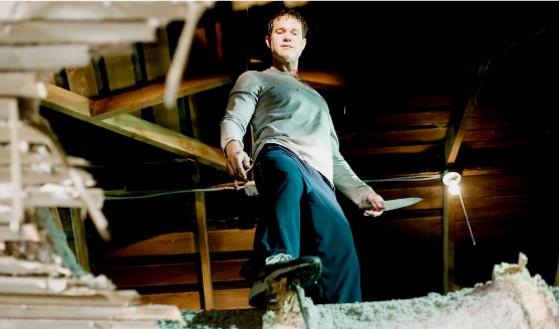 The initial reaction to trailers for Nelson McCormick’s remake of the 1987 patriarch horror “The Stepfather” were highly negative. It was pegged as yet another remake and it appeared to be filled with actors not too interested with the project. After all, there was no way that Dylan Walsh would be able to out do Terry O’Quinn from the original movie, so why bother? Now having sat through the movie and seeing just what Dylan Walsh was capable of as an insane step father hell bent on the perfect family, I have to eat my words. It turns out, the movie and Walsh were just fine.

The setup is simple; an insane man wants the perfect nuclear type family and will do anything to get his wish. If his newly adopted family fails to comply and falls beneath his lofty standards, he’ll just wipe them all out. Traveling from town to town and wooing divorced women, David Harris murders his way across the country en-route to being crowned father of the year. Except he’s not always named David Harris and the Father of the Year bit exists only in his own mind.

Nelson McCromick’s version of “The Stepfather” does very little change things up from the 1987 original. A few of the obvious things were changed along the way; Jill Scholen was swapped out for a son in the form of Penn Badgley and there were a couple of extra kids thrown in for the mix, but that's about it. This does raise the question of why they felt a remake was needed for this franchise but by now we all know the answer to that; money. The studios like making money and they want a safe bet to slap onto celluloid and push out the door. "The Stepfather" is more or less a simple cash grab for Screen Gems. Despite this, it's not a terrible watch.

The biggest concern going in is how Dylan Walsh would measure up as the insane step father. Terry O’Quinn did such a great job portraying his simmering anger and insanity that bubbled just under the surface in his day to day life. Dylan Walsh does quite a fine job here. He has the manly charm needed to woo the likes of Sela Ward, works great as the want to be family man, and plays well off of the children.The key judge of his performance is how he comes across when he hits the heights of anger and starts to cut loose on those around him, a portrayal in which he excells.

I was also concerned with eldest male child of the family being the lead of the film. After all, Jill Scholen in the original film had a certain innocence and charm about here that made it easy to sympathize with her. Early on, the marketing led us to believe that Penn Badgley would be playing an over bearing douche bag type of teen primarily concerned with looking cool on screen. The trailers also hinted towards a heavy foray into teen sexuality causing a lot of tension with Badgley and Amber Heard which was off putting. In the final product, while that teen sexuality is there, it isn’t a major plot point. It is one of the devices that leads to the stepfathers unhappiness; he doesn’t want a son that’s known for defiling young virgins and getting a bad reputation. He wants a good boy that does that right thing. With the switch from a daughter to a son, the device fits well. Plus, it’s Amber Heard. That always helps a bit too because she’s generally pretty great.

My message to all of you out there that were with me hating on “The Stepfather” from the first trailers? It’s not so bad! I can’t say that was fully worth the $10 admission fee when it first hit theaters but it a great watch for home. The tension runs thick as we watch Harris come unhinged and the characters are plenty engaging. Sure, you may not sympathize with Penn Badgley as much as you did with Jill Scholen the first time around but you will get drawn in. If it helps, you can sympathize with Sela Ward as she seems like a pretty sweet mom.