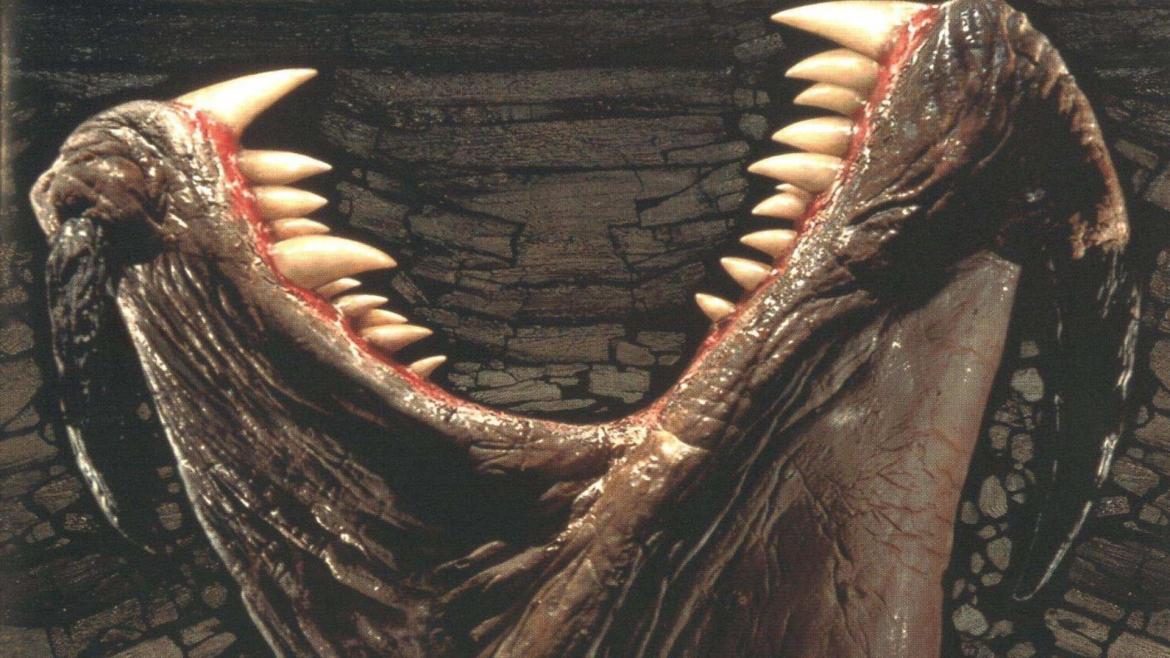 Maybe the best explanation for Tremors’ longstanding cult status is that it created a new niche and immediately filled it: effects driven sci-fi/comedy with an unusual western twist. Or it could be because it embraced its goofy premise with the right blend of humor and let everyone have a good time. Tremors isn’t wildly  or even all that memorable, but on the other hand, there’s little truly negative you can say about it.

Perfection, Nevada is an extremely rural collection of trailers and storefronts populated by the sorts of people who live mostly off the land as ranchers, farmers or roughnecks, as well as the occasional survivalist desperate to escape civilization. Valentine (Kevin Bacon) and Earl (Fred Ward) don’t fit that mold--they’re sick of their lives in Perfection and make plans to leave it behind for any other pasture.

But on the day of their great escape, they’re thwarted by several obstacles: one acquaintance found dead of thirst after days spent atop an electrical tower, another mysteriously decapitated, and the roads out of town all collapsed under landslides. With the assistance of a graduate student in seismology named Rhonda (Finn Carter), Val and Earl realize their town is being besieged by huge, blind worms that are attracted to loud noises and other vibrations.

Soon enough all surviving townspeople (there are fewer than a dozen) have sequestered themselves in the general store, and the movie conforms to the familiar, but never boring, shape of a traditional monster movie. There are bratty kids and a romance subplot--the most fun comes from the Gummers, played by Reba McEntire and Michael Gross, whose years of living in fear of the end of the world have left them a little kooky and plenty prepared to face the threat of the giant worms with their elephant guns and explosives. Because it’s low on gore and focuses more on the characters’ heroism than fear, Tremors is more of an action film than something traditionally scary; in spirit it’s very much an early B-movie precursor to movies with far, far higher budgets like Independence Day.

Of course, the centerpiece of the movie is the worms--or as they come to be known, the “graboids”. They get plenty of screentime and are sufficiently gross (one of them bursting in an explosion of orange goo is a highlight), but they also spend a lot of the movie underground, rippling under dirt and knocking buildings over from below. It’s a credit to the skill of the effects team that--with the exception of one shot when it is really, really obvious that Bacon and Ward are standing on a giant panel opening on a hinge--it’s usually unclear how they are achieving the look of giant worms moving through the sand. Note to aspiring filmmakers: finding a believable excuse to conceal your monsters without feeling like cheating is a really great way to make a low budget horror/sci fi movie.

Tremors is not going to give you nightmares or disturb you with a dark, deeper message about humanity. But when you’ve got some popcorn you want to use up and you’re in the mood for laughs and some admirable low-budget effects, Tremors (and some of its sequels) is a good go-to.