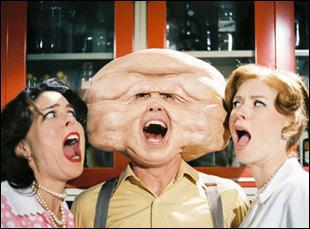 Evil disembodied body parts made a pretty good run of trying to take over the world back in the 50s and 60s. There were plenty of hands, heads and brains flopping about but other body parts got a short shrift. Some were just hard to translate to the screen: knees and elbows might be capable of dealing great damage, but a single disembodied joint is hardly cinematic. Other parts were unmentionable at the time and would have to wait 40 years for the internet to come around and desensitize the population (see “Bad Biology”). A third category of unfilmable killer body parts exists: those too stupid to even consider. Like, perhaps, the forehead.

Evil foreheads. Those two words should be enough to ward off most of the people who almost certainly will hate this movie. If you can’t get on board with the extraterrestrial foreheads, this is one ride that is definitely not worth taking. Even if you get past that initial hurdle, there’s still no guarantee this movie will agree with you. On the one hand it’s a very clever, pitch-perfect parody of drive-in era B-movies brought to you by Larry Blamire, the director of the similar “Lost Skeleton of Cadavera” who has been quietly carving out his own private niche of tongue-in-cheek retro genre comedies. On the other hand, it’s a feature length movie about killer foreheads from space. Such things are not to be taken lightly.

The film opens in the charming seaport village of Longhead Bay where local cut-up/inn owner Amos (played by the always welcome Daniel Roebuck) heads off into town to buy some bread and think up some new amusing jokes. Along the way he encounters a disembodied forehead which attacks him and attaches itself to his own forehead, turning him into a listless, dead-eyed forehead vehicle.

Meanwhile, across town at the highly prestigious Institute for Brain Studying, lady scientist Dr. Sheila Baxter has made the controversial discovery that the forehead, not the brain, is the center of all human knowledge. This leads Dr. Baxter and her colleague Dr. Latham to develop the serum Foreheadazine, which can increase the size of your forehead, therefore increasing your intelligence. Dr. Latham begins experimenting with Foreheadazine upon himself and soon develops a forehead that covers most of his head, and the intellect to match.

In the middle of all this wander two hearty sailors in port for some R and R. It’s up to Big Dan Frater and Dutch “The Swede” Annacrombie, along with some help with the local librarian and her intuitive power to notice that lots of people have been checking out books on foreheads lately, to get to the bottom of the strange changes in the personalities of townspeople and their newly thickened, occasionally throbbing, foreheads.

So yeah, it’s a pretty stupid movie. Stupid like a fox. The awkward dialogue, washed-out pastels and bad editing are so perfect that at first glance it might not be immediately obvious that this is a contemporary send-up and not some long forgotten midnight movie. It never blatantly winks at the audience, which is a relief in this age when everything from cartoons to sitcoms are so meta and self-aware that they should come with permanent quotation marks blinking in each corner of the screen. The film is content to trust that the audience can get the jokes on their own and if they can’t, well, they’re not going to like this movie anyway.

For me at least, the problem with all of Blamire’s films is that while the joke is very funny and very well-executed, it does lose its effectiveness and become grating over the course of 90 minutes. The first half hour of the movie I was delighted and chuckling at all the silly gags and tropes that perfectly nail the atmosphere of the bad movies I grew up with. Around the second half hour the laughs gave way to smiles and nods as the initial joy of the film had passed. As the last third of the film rolled around, the film started to feel like a friend who had overstayed their welcome. I still liked it and respected it but I would really appreciate it if it would just finish up its business and leave. Maybe the unfortunate truth is that Blamire is very good at what he does but what he does isn’t particularly suited to feature length movies. This would probably kill with a festival crowd or in front of an appreciative well-lubricated audience, but for general viewing it’s uncomfortable to keep your tongue in your cheek for that long.