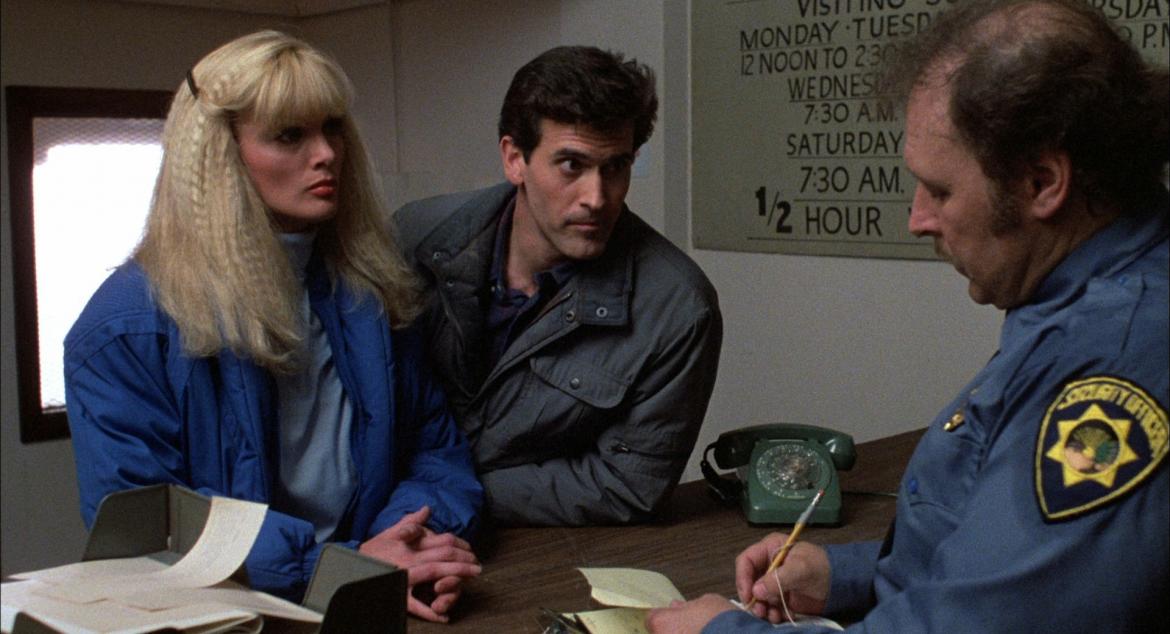 There’s a scene in 1988’s Maniac Cop that feels eerily prescient given the current relationship between some police departments and the communities they serve. In the film, New York City is held in the grip of mass panic as a mysterious stranger dressed as a cop stalks the streets, killing criminal and victim alike. During the scene in question, a woman, acting out of sheer panic and self-preservation, guns down a police officer as he approaches her stalled car, a cop who turns out to be of the non-maniac variety. Of course, earlier in the movie, there’s also a scene where a guy drowns in a freshly-poured slab of sidewalk, so it’s best not to get carried away with sociopolitical analysis.

Despite that brief flirtation with something more high concept, Maniac Cop wears its status as a cult classic like a badge of honor – and how could it not with the cast assembled? At the top of the bill are a pair of iconic B-grade leads in Tom Atkins and Bruce Campbell. In more ways than one, this feels like a passing-the-torch role for Atkins, who seems to bestow his crown as King of the B-movies upon Cambpell. That duo, who play cops tracking the killer, joins Mystery Science Theater 3000 favorite Robert Z’Dar (Oh Z’No!), who corners a meaty role of his own in the film.

We already touched on the film’s plot at a high-level, but upon closer examination, it too is deeply reflective of the era’s B-movie scene. Don’t let the ample police presence or the big city setting fool you. Maniac Cop sticks close to the 80s slasher template solidified by Friday the 13th, wherein an unseen – at least until the finale – revenge-seeking killer dispatches unsuspecting victims in occasionally campy fashion.

Viewers who know that template well will also know that there must be a big third act twist, one where the killer’s full motivation and appearance are revealed in a shocking turn. Maniac Cop does not disappoint in that regard, providing its slasher with a backstory and visage that stretch plausibility in all of the expected ways. Prior to those big reveals, however, the film also throws in a legitimately shocking twist much earlier on, almost flippantly disposing of one main character and elevating a member of its supporting cast into the spotlight.

Maniac Cop isn’t an unconditional recommend. Many viewers will likely be turned off by the shakiness of the acting and the narrative which either drags or makes confoundingly bold decisions regarding its characters. However, if you’re the kind of viewer who perceives those issues as cult movie charm, or could finish that Robert Z’Dar joke without the parentheses, then Maniac Cop is a must-watch.