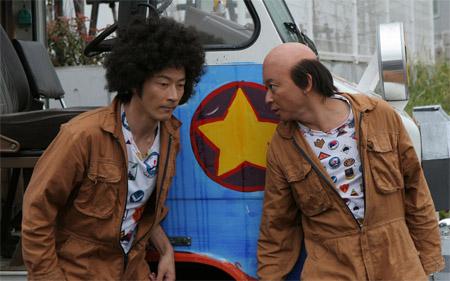 If you’ve seen the trailer for Sakichi Sato’s “Tokyo Zombie” you have a pretty good idea what kind of movie awaits you. Indeed, if you are an enthusiast of the Japanese sense of humor and their flare for melding gore, scat jokes and wildly over-cranked plotlines then you won’t be disappointed. What might surprise you is that rather than being built on a foundation of noisy spectacle, “Tokyo Zombie” is firmly rooted in two strong comedic performances.

Fujio and Mitsuo work at a fire extinguisher factory in the shadow of a giant mound of man-made waste known as Black Fuji. One day while practicing Jujitsu, Fujio inadvertently kills their boss. Mitsuo and Fujio decide to bury the body on the mountain of Filth, which, come to find out, is how a lot of the locals rid themselves of their unwanted acquaintances. While they are there the mountain starts giving up its dead. A zombie plague ensues and Mitsuo and Fujio decide to head north. Russia is the chosen destination because, as Mitsuo figures it, Russia is a manly country where he and Fujio can develop into the kind of fighters that they aspire to be.

The two never make it to Russia, but along the way they pick-up Yoko, a reluctant hitchhiker from a zombie filled rest stop. Mitsuo sustains a zombie bite and subsequently dies from the bite leaving Fujio and Yoko to fend for themselves. An animated sequence follows that explains that over the next five years “Tokyo dies”. In the aftermath the zombies and surviving poor are rounded up as laborers and entertainment for the super wealthy.

When we next meet Fujio and Yoko they are living in squalor and Fujio is an unbeaten but unpopular fighter of zombies at the local thunderdome. The two also have a young daughter who is mute, a condition that Yoko blames on Fujio. They are miserable and appear trapped in their circumstance… but all is not lost. To elaborate further would rob you of some of the surprise, which is a grave disservice when talking about this kind of unhinged Japanese comedy.

“Tokyo Zombie” is a self-aware screwball foray into the shallow end of the gross-out humor pool. This is not to say that it doesn’t meld a number of themes that American comedies steer clear of, but it doesn’t seem to place the same gleeful onus on splashy gore set-ups that recent offerings such as “The Machine Girl” and “Tokyo Gore Police” did. The film’s low-fi approach to its gore would be a mistake if the zombie element were central to the movie. But Sakichi prizes dead-pan characters over the munching dead. There are plenty of living dead hijinx to be had, but the real humor is in the dispassionate existence of Mitsuo, Fujio and Yoko, despite living in the midst of zombie chaos.

The first half of the film is strong, both in its humor, which lies somewhere between Wes Anderson and the Farrelly brothers, and in its execution. Mitsuo and Fujio are likable, and while the sight gags aren’t going to shock any well-worn fans of contemporary Japanese cinema, there’s enough edge to them to elicit a good-natured groan or two. There is also just the right ration of nose-thumbing, winking and straight-faced satire to create a wacky, sweet and uniquely downbeat tone for the first forty five minutes.

The second half of the film is not quite as enjoyable as the first. While the goofiness is certainly ramped up and the plot veers in an unforeseeable direction, it alters the tone too drastically for my taste. The difference is mostly felt in the near total absence of the Mitsuo character and his interplay with Fujio. Even the “Best of the Best 2” style zombie arena fighting is somehow more set-up than pay-off.

The third act pulls out of the slight nosedive thanks to some strong gags; especially one involving Fujio’s daughter’s first words. In some ways it feels like the first and third acts were penned by a different person than the middle portion of the film. But if you are not apt to care about an uneven tone and a lull in the good jokes, you might well get through it all with out noticing it too much.

In the end it’s pretty easy to recommend “Tokyo Zombie” to any one who has interest based on the trailer. In reality, the film is actually quite a bit better than the trailer suggests. This is due to good writing, acting and impeccable comic timing. Sakichi Sato gets a lot of credit for knowing that even when your movie features a sewage cannon, pedophilia jokes, and castration by rotten teeth you still need a character you can stand to watch over the long haul. In this case he gives the audience two of them, played by actors who have good comedic chops and better than average chemistry.