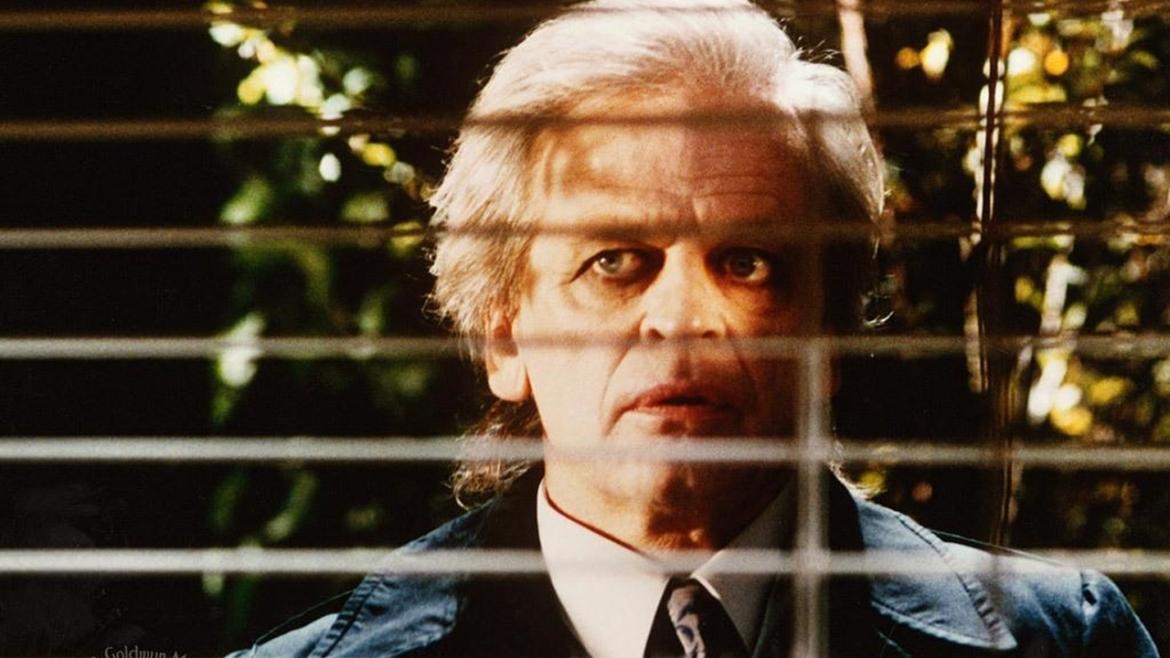 A girl with a flashlight creeps anxiously up a flight of stairs. She enters a darkened room and pans her flashlight across a cage filled with rats, various surgical tools and Nazi paraphernalia and stops on a waist-high cage filled with a grunting, shorn-headed woman. Klaus Kinski appears and nonchalantly says “Zhe can’t talk. I cut her tongue out” and nods towards a jar with a tongue floating in it. Kinski makes a puckered bucktooth rabbit face and

presses a hidden button which causes a metal spear to swing out of the wall and impale the girl. Cut to Kinski, sitting at a table in a sterile black and white room, a gun and one bullet lying before him. The bullet is engraved with “Gunther” and he cuts his finger with a scalpel and smears blood on the engraving. He inserts the bloody bullet in the revolver, spins the cylinder and snaps it shut. Lifting the gun to his temple he braces himself and pulls the trigger. Click. A faint smile followed by a look of disappointment. He puts the gun down, says “So be it.” and flips over an “Apartment for Rent” sign as the score swells and the credits begin.

That’s the opening five minutes of “Crawlspace” and your reaction to this sequence is a pretty good indicator of how much you will enjoy the movie. If you roll your eyes at the kind of overwrought 80s cheese that clogged the aisles at VHS rental shops 20 years ago, then you’ll probably find “Crawlspace” to be over-the-top and more laughable than scary. If, on the other hand, the idea of a gurn-faced Klaus Kinski playing a rat-breeding Nazi landlord who crawls through the heating ducts of his extensively booby-trapped building to spy on his exclusively young, female tenants at all sounds like a campy good time, then “Crawlspace” plus a few beers and some like-minded friends could add up to an entertaining night.

Kinski isn’t just the star of “Crawlspace”, he’s pretty much the entire reason to watch the movie. Without Kinski’s nutty performance, “Crawlspace” is just a bizarre, if fairly tame slasher movie that oh so desperately wants to be compared to Hitchcock. Future “Mad Men” star Talia Balsam plays Lori, the protagonist, a pretty co-ed who moves into the building apparently oblivious to Kinski’s leering, tortured facial expressions and general creepiness as he shows her around the flat. She moves in and bonds with her new neighbors, a secretary with a uniformly terrible southern accent, a kinky aspiring singer-songwriter prone to showcasing her talents and a soap opera actress who, um, plays a soap opera actress. On a soap opera.

As the girls frolic around their apartments (wearing a surprising amount of clothes considering the perv factor seemingly demanded by the film’s premise), Kinski crawls around in the heating ducts, watching them through the vents and frequently creeping them out through his habit of tap-tap-tapping the knife in his hand or by releasing rats into their rooms through the remote control mouse holes he has installed in their apartments. No, really.

The film meanders along fairly plotlessly until the brother of one of his past victims knocks on Kinski’s door, intent on exposing him as the murderer he is. After telling Lori his suspicions, the man has the misfortune of sitting in a particularly painful-looking booby-trapped chair and the movie shifts into balls-out insane mode for the remainder of its running time. Aware that his compulsion to kill is in danger of being exposed, Kinski smears on lipstick and eyeliner, plays old propaganda films of Hitler speeches and sets to killing off his tenants one by one. This being a budget-deprived 80s slasher film, we don’t see the actual murders so much as the Leslie Vernon-style carefully posed bodies that Lori discovers one-by-one in the third act which kicks off with a delightfully campy phonecall in which Kinski hisses “Who’s svimming in your bafftub?” and climaxes with Kinski chasing Lori through the titular crawlspace zooming along on his belly riding a mechanic’s creeper like a bobsled.

“Crawlspace” is a footnote in the great horror boom of the 80s but in terms of sheer campy fun there are far worse ways to spend 80 minutes. Klaus Kinski walks the tightrope between great actor and terrible ham and is tons of fun to watch when he stumbles on either side of the line. During the making of this film, Kinski was apparently so difficult to work with that an Italian producer was intent on putting out a hit on Kinski in order to collect the insurance money and, after being talked out of it, exasperated crewmembers would come up to director David Schmoeller and ask him to “please kill Mr. Kinski.” Not long after Kinski’s death, Schmoeller made a short film about the making of “Crawlspace” called “Please Kill Mr. Kinski” which eulogized the actor both as an immensely talented artist and as an insufferable prick. Fans of high camp and 80s slashers take note: “Crawlspace” is worth getting into.