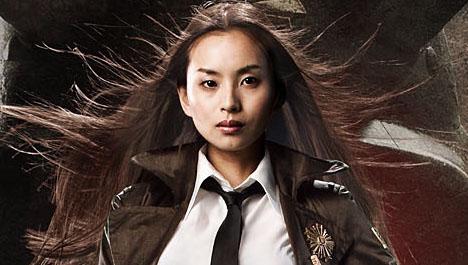 If you’re a self-proclaimed fanatic of the strange, the bizarre, and the unusual, Japanese cinema is probably the best place to indulge your admittedly warped taste in film. The country is literally overflowing with some of the craziest nonsense ever committed to celluloid, ranging from unhealthy and unsanitary sexual practices to the sort of demented body horror that would send David Cronenberg into violent fits of unbridled terror. Simply put, the vast majority of their genre-related output is the cinematic equivalent of a Coney Island freak show for the morally and spiritually bankrupt. Intentional and unintentional metaphors abound.

Talented special effects wizard turned feature film director Yoshihiro Nishimura’s genre-bending sci-fi splatterfest "Tokyo Gore Police" is, at the time of this writing, the high-water mark for over-the-top Japanese debauchery and gore. It’s a dizzying foray into blood-soaked excess, gloriously constructed around one of my favorite grue-related gimmicks: the arterial spray. The level of blood flow is often overwhelming, as is cinematographer Shu G. Momose’s frantic Peter Jackson-inspired camerawork. Unfortunately, the movie has little to offer outside of its cheap visceral thrills; looking for any sort of depth or meaning would be an exercise in futility.

Using Ridley Scott’s iconic "Blade Runner" as a foundation for its madness, the film follows the adventures of punky police officer Ruka (Audition’s Eihi Shiina) as she strives to rid Tokyo of a particularly savage breed of criminals known as “engineers.” Their trademark: transforming unsightly mortal wounds into deadly, sinewy weapons. The lady’s dedication to her craft, as you may already have guessed, stems from the impossibly juicy assassination of her father, who was shot point-blank in the head right before her tender little eyes. Say what you will about her gruesome brand of sword-swinging justice, but at least the girl knows how to properly manager her anger issues.

Before long the story branches into more complex territories, though, and to be perfectly honest, the film’s plot comes secondary to all those gloriously sticky visuals. Besides, Kengo Kaji and Sayako Nakoshi’s formulaic script isn’t exactly bursting with originality, as it often plays more like an homage to American cult classics than anything else. In fact, those "Starship Troopers"-flavored PSAs sprinkled throughout the course of the picture incorporate the memorable score from a certain underrated 80’s superhero flick. Hint: Think Dolph Lundgren in a designer loincloth wielding a very ornate sword.

Let’s face the cold, hard facts here, people: "Tokyo Gore Police" isn’t designed for those looking for a meaningful cinematic experience. As the title implies, the film’s sole purpose is to supply its target demographic with an overabundance of icky red gore. There are very few moments when someone - or something - isn’t bleeding out, falling apart, or sending never-ending geysers of horrific fluid high into the air. And just when you think you’ve witnessed the very best the film has to offer, you’re suddenly presented with an impromptu parking garage shoot-out involving a blood-thirsty killer and his oversized penis bazooka. Color me impressed.

There are, I’m afraid, a few tiny chinks in the proverbial armor, especially in terms of the special effects work. Most of the creatures, weapons, and wounds are skillfully crafted using old-school methods, mostly foam, latex, and lots of elbow grease. The CGI effects, on the other hand, are less than spectacular, though they do help increase the film’s low-budget, low-tech charm. Although they certainly won’t detract from one’s overall enjoyment of the feature, those who love to point and mock unpolished FX will have several opportunities to do so. Had the material been presented in a serious fashion, I could understand the criticism.

At nearly two hours in length, Tokyo Gore Police might be a tad longer than most people are willing to tolerate. After all, spending nearly 120 minutes with an assortment hardcore violence, perverse genetic abominations, and imperfect special effects is asking a lot from an audience. However, if vaginal alligators, wanton dismemberment, and a loving tribute to cult favorites sounds like the perfect Friday evening, you should feel right at home in Ruka’s twisted little universe. And regardless of what your final judgment of Nishimura’s outing may be, you can’t say its title was at all misleading.