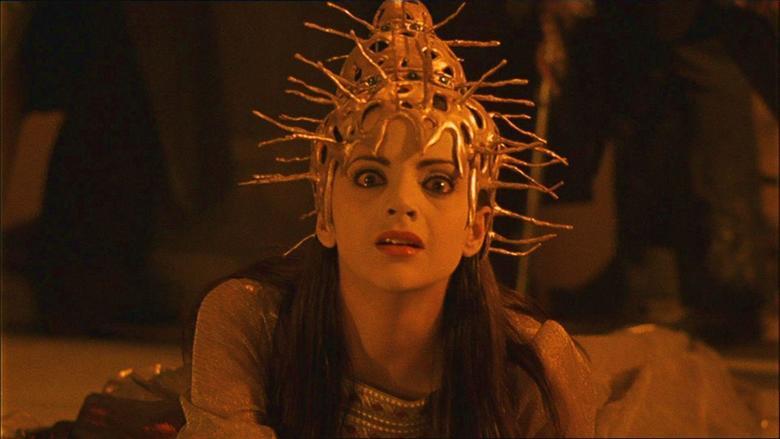 Stuart Gordon has been the go-to Lovecraft director since he blew minds with his classic Re-Animator in 1985. He returned to the weird world of one of horror’s most famous authors with Dagon, a loose adaptation of the stories Dagon and The Shadow over Innsmouth. The result is something akin to a waking nightmare.

Paul Marsh (Ezra Golden) has become fabulously wealthy due to a good run with the stock market. Our story starts with Paul, his girlfriend, Barbara (Raquel Merono), and another couple sailing on Paul’s yacht. Naturally, a terrible storm occurs, injuring Paul’s friends and forcing Barbara and Paul to go to shore for help. They wind up in the small fishing village of Imboca, and discover that things there are very, very wrong. Paul and Barbara split up to find help, and Paul spends a significant amount of the film’s run time being chased by Imboca’s strange inhabitants.

Paul eventually meets a beautiful woman who he’s been having recurring dreams about. She tries to seduce him, and he nearly gives into her advances until he discovers (in one of the more nasuea-inducing love scenes you're likely to see) that she’s only human from the waist up; the lower half of her body is made up of squid-like tentacles. She reveals to Paul that everyone in Imboca is part-fish, and they worship Dagon, a god-like monster that lives in the sea. The woman, Uxia, wants to make Paul her bride so they can rule over the people of the village together.

Dagon is not as much fun as Re-Animator, as it lacks the earlier film's zaniness and sense of humor. It is much more serious work, though, and is truly unsettling and often frightening. Gordon does a great job of invoking the sense of being pursued in one’s nightmares, as Paul encounters one creepy denizen of Imboca after another. The village itself is nearly a character of its own, and ads a heavy dose of atmosphere featuring buildings with run down exteriors and interior rooms that appear not to have been cleaned since the 1950’s. The fact that it was filmed on location in a small Spanish town with many Spanish-speaking actors adds to the otherworldly feel of the narrative.

Though released in 2001, fans of ‘80s horror will feel at home as there is plenty of nudity, excellent practical effects, and a heavy dose of gore. Though the budget was small, both the production values and acting are solid.

This was Gordon’s third foray into H.P. Lovecraft’s work, following the aforementioned Re-Animator and 1986’s From Beyond. It’s also his most polished. Though Dagon is likely a bit too bizarre for people who enjoy their horror more on the mainstream side, it’s probably a must-see for anyone who is a fan of Gordon’s earlier work...or yearns for the call of Cthulhu.