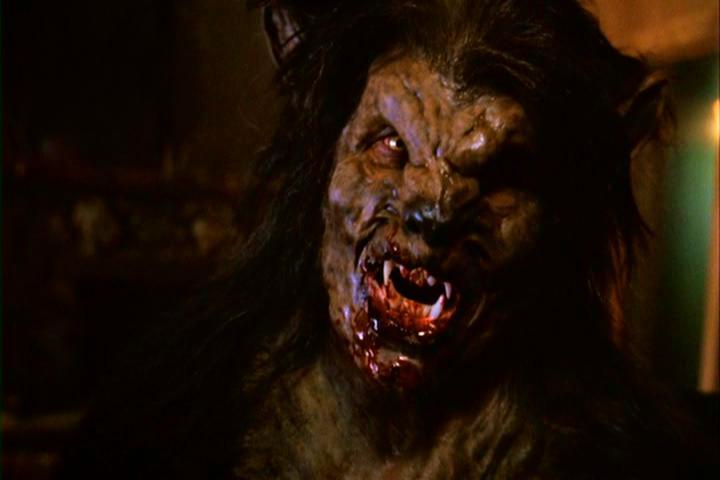 One of the saving graces of watching newer, b-grade, straight to video horror films is that you often get to reconnect with actors who have fallen out of mainstream rotation. Yesterday’s “next big thing” is frequently today’s “oh shit, remember him?” In many cases, the presence of one of these lost wunderkind in a newer film is just a reminder that their flame out from the hotlist was the result of their talent limitations. But once in awhile, one of these also-rans manages to elevate a deplorable film to a watchable level.

“Big Bad Wolf” starts with a forgettable set-up. A group of college kids steal away to a remote cabin and end up being raped and ripped apart by a wise-cracking werewolf. Two kids survive; Derek, whose beastly step-father Mitch, owns the cabin and Derek’s unrealized crush Samantha, a spunky mechanic with more sass than wit. After the attack the two begin to suspect that Mitch and the offending lycanthrope are one and the same. A visit from Derek’s uncle Charlie prompts them to dig deeper into Mitch’s animal nature. Their suspicions are confirmed via a DNA test; the sample for which is retrieved through an unexpectedly novel method. Eventually the Step-wolf gets wise to the plot that Charlie, Sam and Derek are hatching, kidnaps Sam and retreats to the cabin. The final showdown comes, Derek has his --“This has to end now!”-- nerd to man moment, people die, and sequel openings are created.

The first 40 minutes of “Big Bad Wolf” are tepid. A weak Cameroonian hunting trip prologue with beer commercial acting gives way to a void of boring frat and scat dialog from the college kids. Technically speaking the collapsing of time and story detail is presented through the safest possible shooting, cutting and lighting strategy. As viewers we travel from the rain soaked fauna of the L.A. arboretum, excuse me, Cameroon, to the multi-million dollar tract homes of Simi Valley (though I would have guessed Carlsbad) then out into the oak dappled hillocks of Big Sky Ranch, fascinating isn’t it? Sadly, this is the kind of thing I was dwelling on to try and deliver myself from the limbo of flat lighting, the ordeal of an unimaginative driving montage and the hell of after-school-special framing that dominate “Big Bad Wolf” . Even soft core sex and actual nudity offer little relief from the creeping averageness of the first act. During a simulated fellating I was stuck on the administering woman’s position rather than being caught up in any intended titillation. Seriously, she either couldn’t tell a dipstick from an outie or the recipient had a 20 inch love rod with a hard right angle in the middle. Just when I was ready to turn it off and head back to Netflix for a new selection, Richard Tyson happened.

If you don’t recognize old Dick Tyson’s name, he made a small splash in the late 80’s feeling up Sherilyn Fenn in “Two Moon Junction”. His seminal role came a year before that playing the stone-hearted bully Buddy Revel in the underrated 80’s “High Noon” in a high school film “3 O’clock High”. “Big Bad Wolf” is so milquetoast before Tyson starts to unravel that it is hard to tell if the entertainment factor after that point is high or just a relief by comparison. Whatever the case, the last half is more fun than the first and even manages a few engrossing moments. Most of this is down to Tyson’s work, but the gore effects and the director’s willingness to keep inserting nudity do start to pay dividends once there is another reason to watch.

None of this should lead you to believe that this movie ever manages to fully synchronize all of its elements. The wolf suit makes “RawHead Rex” look like a flawless work of foam craftsmanship. I mean it looks very nearly, (1953) “Robot Monster”bad in several shots. The direction and/or the editing are also pretty horrible. There are very likely some good actors beyond Tyson, but the way the dialog scenes are cut the players have no chance to own the feelings, instead they simply recite pertinent info. Another big problem is the writing, specifically the comedic content. The humor plays like forays into “Better Off Dead” style teen comedy, but the jokes are so flaccid that they end up functioning as gravel pits for the plot’s momentum.

You could definitely find a lifetime’s worth of films on Netflix Instant Viewing that are superior to “Big Bad Wolf”. The truth is you could also do a lot worse. If you have it in your head to watch something modern and mindless with a fair amount of nudity, gore and at least one good performance to hang your hat on, then maybe “Big Bad Wolf” works. I could see it filling up 90 minutes of long day in bed with the flu or recovering from having your wisdom teeth pulled. Just bear in mind that the first 40 minutes may make you feel like your reliving the extraction all over again.