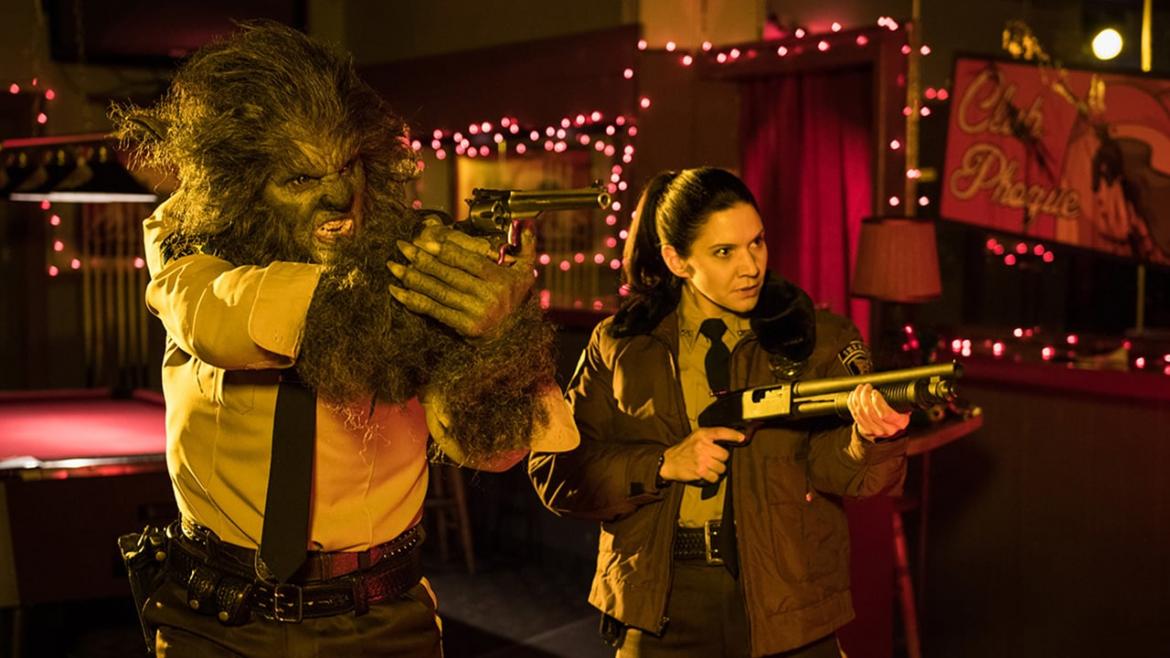 What is there to say about a sequel to WolfCop? Quite frankly, if you saw and liked WolfCop, then there's really nothing that should keep you from tracking down Another WolfCop. If you slightly hated the first, then you already know what to do here. I suppose, this is the kind of review for those who were indifferent or on the fence if they even wanted to invest their time into catching up with the WolfCopiverse.

The most important thing to know is that this is the type of movie for those who look back fondly at retro cop movies and 80's cheese. If Another WolfCop and its predecessor were any cheesier they'd be shirtless at a Packer's game, beer belly out covered in green and yellow paint, with a triangular swiss-shaped hat on its head. The sequel in fact goes so far to create the furry anti-hero into a billable pop culture icon that it often feels like it originated as a comic book character.

The evil shenanigans that's driving the plot feels right out of a Scooby Doo cartoon. Lou Garou (Leo Fafard), aka WolfCop, must thwart the evil plan by an eccentric businessman, Swallows (Yannick Bisson) that includes a brewery pumping out a stout called Chicken Milk (complete with a tacky slogan like "Swallow a cock!" or something to that effect) and unveiling the towns new hockey team. The unwitting townspeople however don't realize the dangers lurking within the beer's ingredients and the unsavory intentions of Mr. Swallows.

Another WolfCop is essentially midnight movie fodder. The humor is fit for high school locker room banter, complete with a juicy (and I mean that literally) werewolf sex scene that is a Furry's wet dream. Still, Jonathan Cherry, who many may recognize from Goon, returns as Lou's best bud, Willie, and that dude is delightful every time I see him-plus a surprising and short appearance from Kevin Smith as the town's mayor. Outside of the outlandish immature humor you're treated to some ultra low-budget violence which pairs just well enough with the movie's humor which is essentially all you've really got to hang your hat on with this particular brand of entertainment.

If you keep your expectations low, have an open mind, and don't mind your teen nephew's tasteless jokes then Another WolfCop won't be the most excruciating 82 minutes of your life. However, if super low-budget gore and junior high sex humor sounds isn't your bag, you'll do well to avoid this one's awkward howl like the plague.