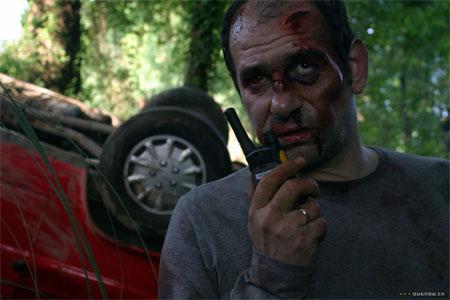 "Timecrimes" is a Spanish time traveling thriller that has been making the festival circuit for quite some time now. The reactions have been mixed, and have ranged everywhere from "amazing" to "lukewarm". With the US DVD release now upon us, it's finally time for horror fans to sink their teeth into the film and decide for themselves.

Our main character is Hector. Hector returns from home one day and opts to spend some time out in the garden watching birds with his wife. As he spies upon the woods behind his house he comes across a strange and captivating sight; a topless Spanish woman! Captivated by this unfamiliar bird he continues to watch while trying to hide the fact from his wife. As he returns his attention to the woods he is shocked to find that the woman is now dead. Fearing the worst Hector heads off to the woods to see if he can help and what unfolds is a sequence of events he could never imagine. Finding himself chased by the culprit behind the young dead Spanish girl, Hector flees for his life, eventually stumbling across an isolated laboratory hidden away in the woods. Hoping for safety in the lab, Hector soon realizes he's in much more danger now than when he was being chased by a potential murderer.

Time travel movies are a tricky lot. For starters, they're prone to plot holes and confusion. Time travel as a plot device in itself can also be used for a quick fix to other glaring issues in the script. In "Timecrimes" the time travel element is used as a key plot point and it works well enough; although it's not immune to the aformentioned plotholes. Thankfully there is enough quality story telling packed into the running time that it is mostly forgettable. Some may call this issue a paradox; some may call it frustrating. The common string however is that the plot issues do not become apparent until after the credits have rolled and you find yourself thinking back on the matter for hours after the fact. Despite which camp you find yourself in, paradox or plot hole, "Timecrimes" succeeds in leaving you something to ponder, and that's where it's greatest strength lies.

Aside from the heavy plot and thought provoking elements, "Timecrimes" lacks the general nervous excitement generally associated with the thriller genre. While intriguing, the plot lends itself to predictability early on. Unfortunately, lead actor Karra Elejalde does not give enough excitement in his own performance to break this monotony. He remains straight-faced and monotone throughout much of the movie, and as a result the man just simply isn't very interesting.

The others that are working around him, the young woman in the woods and the strange lab technician found in the laboratory are both instantly engaging. They play off the quirkiness of their placement in the story line and draw you in to wondering just why it is they are there. The biggest issue however is that with such a wooden performance from the lead, it becomes hard to care about what's going on about midway through the second act. The other issue is that there just simply isn't a whole lot going on in the movie, especially considering it is supposed to be a thriller. That is not say there are not any thrills, there are plenty in the setup of the first act. There is a problem here though with repetition and with the general setup of the movie, and there's simply no way around that.

Despite its flaws, "Timecrimes" is still a very engaging movie. Perhaps I suffered from a case of misguided expectations, which is quite possible. Once you can work past these issues the movie is quite the mind bender, even if it does become predictable at a certain point. Post-viewing it becomes apparent that Nacho Vigalando may not have been shooting for an edge of your seat thrillride; rather a finely crafted, thought provoking tale that will leaving you thinking back upon the movie when it is all said and done. With your expectations in check, this is definitely one to check out.