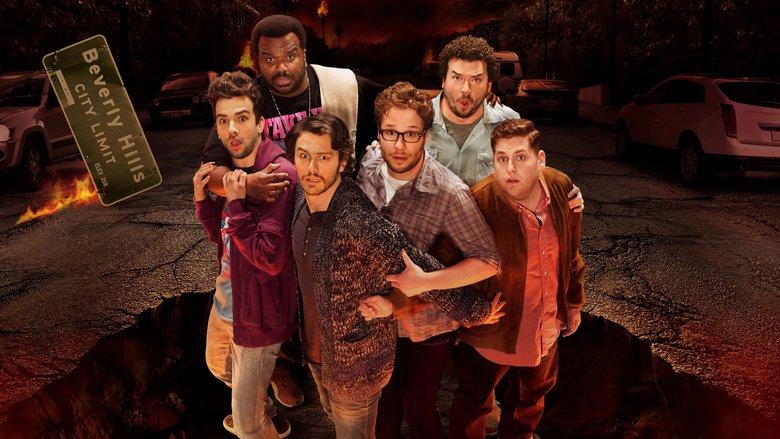 This is the End (Movie Review)

Starting a film with a Backstreet Boys song means there has to be a pay off in the end, and thankfully, This is the End pays up in gold. An ensemble piece that no one knew that they needed, the writing and directing stylings of Seth Rogen and Evan Goldberg are on point here. The humor is subtle just as much as it is thrown in every viewers face; a lovely parallel to the buddy comedy heart of the story that's set in a world completely falling apart. The melding of the front page headlines version of LA with a Biblical throwdown also lends a hand to the underlining commentary of the "young Hollywood" life style. When James Franco throws a party it's clear that every star in town would want to stop by for a drink. When every person at that party realizes the world is ending, well that's where things get interesting. This is the End is the ultimate assembling of the scattered comedic stylings from the new millenium.

Seth Rogen and Jay Baruchel are buds. The arrival of Jay back into LA has prompted Seth to curate some bro to bro time complete with video games, Starburst, soda, beer, and more weed than Jay's body can handle. Once their private party ends, Seth suggests they head to James Franco's house to see what's been going on at the stars house. Jay just wants to party alone with his buddy, but Seth seems to want to pull him into his LA fold of actors. James Franco, Jonah Hill, and Craig Robinson make up the tight group, and despite how friendly Jonah seems to be, Jay just isn't convinced. After watching Michael Cera get a blow job and his salad tossed, Jay decides that heading out for some cigarettes and fresh air is the best option. Seth tags along to confront his buddies distance from the group, but their heart to heart is cut short when the Biblical rapture begins and thousands of people are pulled into the sky via blue beam. The friends hole up in Franco's pad, barricading the doors with as much art as Franco has to offer. When Jay realizes just how Biblical this turn of events has become, he and the group have to figure out how to survive the end of the world and the unhinged Hollywood elite roaming the streets.

It was ballsy to have the characters essentially play themselves in an obviously fictional story. It could have fallen completely flat for the personalities of each of the main characters to literally be who they are in real life. A semi-realistic comedy about the end of the world as told to the viewer through the lens of the Hollywood comedy elite. However, the hyper realized personalities of the actors makes this movie work. The decision to have them all play up what audience perceptions of them are gives a new life to this apocalyptic approach. James Franco plays a friendly but almost out of his mind party host to one of the most randomly assembled cameo romps of all time. It works so well because Franco is someone that would have the connections to such a diverse pool of people. The inclusion of Rihanna and Emma Watson at the party shows just how crazy a party at Franco's house would, at least in audiences minds, be. Even the ensemble cast like Michael Cera gives an over the top performance that seems like it could possibly be real. He's quirky beyond belief and more sinister than be all, but who's to say that there isn't a little bit of that buried deep down in the cherub. This entire dynamic works well in the group interactions. Riffing on each other's movies and pointing out the missteps of their careers is a joke that instantly pulls the viewer into their fold.

Moving into the actual plot, it's interesting how the horror aspect to the film is still on point. From the first major death of Cera via light pole, bodies are dropping in gruesome ways that leave the viewer unsure of whether to laugh or feel violated. Once the demons and devils begin to roam the earth they're still secondary to the comedy stylings of the main group, but it's such an insane backdrop that works so well to drive the story. There are moments that drag toward the middle of the film since a majority of it takes place in Franco's house, and this could have been remedied with more outside action. However, the overall experience is one that will always work even if the viewer doesn't have a close tie to the actors involved.

This is the End is inviting, a slap to the face, and ultimately heart warming.