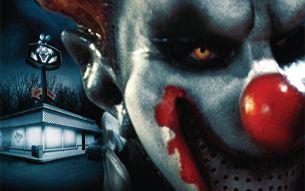 "Drive Thru" is direct to video fodder that actually manages to rise up a bit above the usual pablum with a bit of Hollywood-quality spit polish and some well thought out kills that manage to both make you laugh and cringe. The movie packs a light plot that is standard in today's horror movie world yet tries to twist them around a bit to make it fresh. Unfortunately Writer/Directors Brendan Cowles and Shane Kuhn manage to twist said plot a bit too far, causing it to feel disjointed and somewhat confusing by the time the credits role.

The plot behind "Drive Thru" is a confusing beast in that it manages to be engaging, familiar and amusing all at once, yet leaves you scratching your head from time to time. While the plot is standard, a loose connection between killer, kids, and their parents, the changes made to make the story not quite so stale only manage to confuse. Where we expect the common pieces to fall into place, they either are skipped entirely or they show up out of order.

The biggest offender is the twists and turns of your typical red herring; we are given hints and allusions to who may be the killer so that the viewer may try and guess who is behind the mask. Instead of the logical unfolding of said puzzle, "Drive Thru" waits so that you rule out every possible person that MacKenzie encounters, then manages to introduce a new contender half way through the second act. So instead of coming to a logical conclusion, we are forced to accept something that does not fit logically into the story Were it one instance that this happened it would be forgivable; unfortunately this problem manages to rear its head a time or two more as the movie unwinds.

With the plot problems out of the way, there still manages to be a lot to enjoy in "Drive Thru", including the characters and humor that they pack in throughout. Most everybody in the oh-so pretty O.C. cast turns in an enjoyable performance. Leighton Meester manages to be believable in her 17 year old virginity, alluring in her coming of age desires, and fairly impressive in her tough "we're not gonna take it" turn in act three. As an extra bit of fun, we get to see Nicholas D'Agosto reunite with Melora Hardin on screen once again, this time in an entirely new dynamic from their more familiar turn as Jan Levinson and her meek admin assistant in "The Office". D'Agosto works well as Mac's boyfriend though at times it is hard to tell if he is supposed to be the skater punk type or the hipster photographer type. Hardin makes a well minded yet smothering mother with a dark past.

"Drive Thru" has some heavy flaws in its editing, enough that will make this a movie that not everybody will be able to enjoy. If you can work past these issues, there are still plenty of other elements to make it an enjoyable movie. Solid cast, solid jokes and a great killer will see you through to the end. The final scene of the movie does nothing but leave you with more questions and confusion, but not of the good kind of questions. Instead of leaving us questioning what will happen in the sequel, we are instead left to wonder just what that final moment meant exactly to the entire plot. Sadly, this leaves you with an empty feeling on what could have been quite a fulfilling fast food horror film.