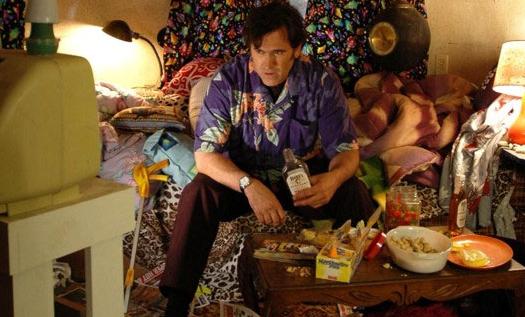 My Name is Bruce (Movie Review)

The idea of having Bruce Campbell - the actor - fighting off some type of real life evil ala "The Three Amigos" is so simple and genius that it's kind of amazing no one has ever thought of it. It must have been in the back of Bruce Campbell's mind for a while though (or perhaps, his nightmares) because he has now executive produced, and directed a film about that very subject. It's called "My Name is Bruce", and after months on the festival circuit, it's just about to hit home video via Image Entertainment.

"My Name is Bruce" starts out with two stereotypical goth teenagers driving to an old graveyard to meet some girls. While there they intend to - oh I don't know - do whatever it is Goths do at graveyards, and try to get some action from the girls in the process. Through a brief exposition scene in the very beginning, we're told by two guitar playing minstrels that we're in a mining town on the West coast, where a large amount of Chinese workers died years ago. After striking out with his lady friend, our main character Jeff (coincidentally, a HUGE Bruce Campbell fan) stumbles upon a rundown old shack, where he removes an ancient looking medallion from the door. It's at this point that Guan-di awakens, the ancient Chinese protector of the dead, and gruesomely murders the rest of Jeff's friends.

Cut to a movie set. B-Movie legend Bruce Campbell is in the thick of shooting his latest starring role, in "Cave Alien 2", a hilariously awful science fiction movie that rivals something you would see on The Scifi Channel in badness. Once the scene has cut, Campbell goes into full on schtick, and begins to lay out the blueprint for his "My Name is Bruce" alter ego. This Bruce Campbell is a hard drinking, binge eating, divorced rage-a-holic who lives in a stanky trailer in the middle of the woods. After abusing some crew members and kicking a guy in a wheelchair for asking for an autograph, he returns to his trailer where he feeds his dog some whiskey, breaks his TV and passes out on his couch.

He's then awoken by a knock at the door. It's Jeff. He needs Bruce to help him destroy the demon he unleashed on his town. Bruce slams the door in his face, but after some trickery and the help of a baseball bat, Jeff knocks him out and throws him in the trunk of his car. Bruce awakens to a town full of what he thinks are actors paid by his agent to uphold this ruse as a birthday present, and the countdown to the "Bruce vs Monster" showdown begins.

Watching Bruce Campbell play himself, or at least a self-deprecating, thoroughly depressing version of himself, is far and away the strongest aspect of this film. Beyond just the funny one-liners and quips, there is a delicate balancing act going on here that makes the wit all the more sharper. He's just as harsh on his fans in this film he is on himself.

All of the characters are here. Those who worship every move he makes, the ones who ask him obscure questions about his character's motivation, and those who are never satisfied. The aforementioned "wheelchair guy" gets kicked to the curb because just like any good asshole, he's pissed that Bruce doesn't have a more recent picture of himself available for autograph. If you've been to a convention, you've met at least one of these characters. And although he's making fun of his fans, it's always done in a loving manner. The fact that he chose to write himself as a down in the dumps has-been, shows a level of self awareness that one might find surprising coming from a man with such a large fanbase.

Once we get to the town the story begins to drag down a bit. There's an extended scene where Bruce is getting cleaned up at the local tavern, and then eats and drinks until he's drunk and his face is covered in food. He then tries to sweet talk the local bartender, who is coded as Bruce's love interest from the moment we see her. It's all sort of cutesy and fun, but taken about as seriously as Bruce takes the threat of there actually being a monster. It's at this point in the film that things begin to drag. In fact, on the whole this feels a lot like "Jack Brooks: Monster Slayer", in both concept and pacing. Both films are fun ideas with great openings, great endings, and not a whole lot to get them from point A to point B. In lieu of having a 60 minute movie, they push the love angle to try and fill running time.

Once we finally get to the showdown, there are a few laughs to be had, but mostly it just points out this film's biggest flaw: the story. Since everything is clearly concocted as merely a setting for Bruce to do his schtick, watching him fight the monster at the end is about as anti-climactic as you can get. It attempts to turn semi-serious and suspenseful in a film that wasn't taking itself that serious until that point, and it all seems forced. Personally, I would have been perfectly happy just watching Campbell piss off production assistants and steal old lady's cars for 90 minutes. In that sense, one has to wonder if this wouldn't be better off as a 90 minute mockumentary, just following Bruce around in his day to day life (think "Curb Your Enthusiasm", only with Bruce).

Don't get me wrong though, "My Name is Bruce" is a terribly funny movie. Bruce nails so many aspects of B movies, Hollywood, and fandom here, that I'm sure anyone who is a regular reader of this site will get a kick out of it. Sure the premise is weak and the 2nd act drags, but there's a lot more to like about it than there is to hate. You've got Ted Raimi playing about 5 different characters (all hilarious), Bruce doing his thing, and enough awesomely gory deaths to fill up a decent slasher film. All in all it may be a bit thin by the time it's over, but that shouldn't stop you from seeing it. I was by myself and was laughing constantly throughout, so I can't imagine what a few drinks and a handful of friends would do for it.