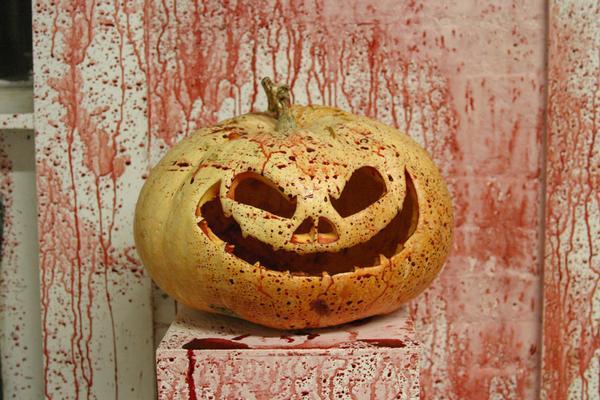 Chris is an hapless dork in Dungeon Master glasses whose Halloween plans involve his cat, a big bowl of candy corn and a stack of VHS tapes with titles like “Zombie vs Unicorn’s Horn”. On his way home he finds an invitation for a “Murder Party” (“come alone”) picks it up with a shrug and carries on. His plans are thwarted, though, when his cat, Sir Lancelot, won’t get out of his chair so he can watch his movies. Because of this stubborn housecat, Chris bakes a loaf of pumpkin bread, looks for an old Halloween costume and, failing that, makes a ridiculous but kind of awesome “Brown Knight” costume out of a cardboard box and sets off to find out what this “Murder Party” is all about. Unfortunately for him, it’s exactly what it sounds like.

The party turns out to be a warehouse full of coked-up, disaffected, pretentious art students. While that could describe half the Halloween parties in any mid-sized college town, what makes this one different is these kids aren’t there to party, they’re there to make Art, which in this case involves murdering an innocent person at random. It makes a statement about society or gender roles or something but more importantly, they see this as their sure fire way in with Alexander, a slightly older coked-up, disaffected, pretentious art school graduate, has been regaling them with tales of the ever inflating amount of grant money he has to give to some talented young artist.

The plan is set, the victim has arrived and they immediately screw up and expose their plan to Chris, who then has to be tied to a chair while they decide how best to express themselves through murder. After a tragically hilarious accident, Alexander finally shows with his not-so-vicious "part-dingo" dog Hellhammer, his Russian mafia drug dealer and a large supply of sodium pentothal. As is to be expected, the situation builds to a farcically blood-spattered conclusion.

The good news about “Murder Party” is that it is very, very funny. For a collection of mostly inexperienced actors who, judging by their IMDB pages, have spent more time behind the camera than in front of it (almost everyone in the cast did double duty either as producers or in the make-up, art or special effects department), they handle comedy like pros. From physical gags like a fantastically un-MacGyver-like escape from a broom closet to throwaway one-liners (“It touched my socks.”) there are more laughs here than in quite a few big budget flicks starring seasoned comics.

Where “Murder Party” goes slightly astray is when it tries on its horror movie costume in the third act. It’s not that it’s poorly done, it’s just that it feels a bit stale after the fresh and funny opening acts and it comes way too quickly. The movie turns on a dime and within five minutes half the cast is dead and one character is pursuing another with axe. It’s a shame too because the first two acts play like “Reservoir Dogs” recast as a horror-comedy.

All of the characters are well developed with their own quirks, aspirations and hang-ups. One great character-building scene is when Alexander breaks out the syringes of sodium pentothal for a dirty-laundry-airing game of “extreme truth or dare”. Even Chris gets involved and shares an entirely unnecessary but funny story of crapping his pants. Enough ground work is laid introducing these characters that even when they do outrageous things it feels earned because we’ve seen enough of them to accept that, yeah, they probably would do something that stupid/crazy/vain.

Another thing “Murder Party” gets right is pulling off a horror movie on a low-budget. Having a majority of the movie take place in one location with the same small group of actors is a classic and smart way to keep the production budget low but “Murder Party” has a few other tricks up its sleeve. Most notably, it breaks modern horror movie conventions by having a few of the more extravagant deaths happen off-screen, only showing us the grisly results. This hearkens back to the early days of slasher movies and the movie plays these off-screen deaths to its advantage by milking dark comedy out of them. At this point your average movie-goer has seen people on fire in so many movies that unless it’s a really spectacular scene it’s not going to have much of an effect on them. If, on the other hand, a character’s screams as they burn alive go unnoticed because the other characters are so petty and self-absorbed… well, that’s comedy gold.

If you’re putting together your own DVD horror film festival this Halloween and need some laughs in between the scares, you’d be well advised to pour yourself a big bowl of candy corn, knock the cat out of your seat and settle in with “Murder Party”. It’s much safer than going to an arty hipster warehouse party.