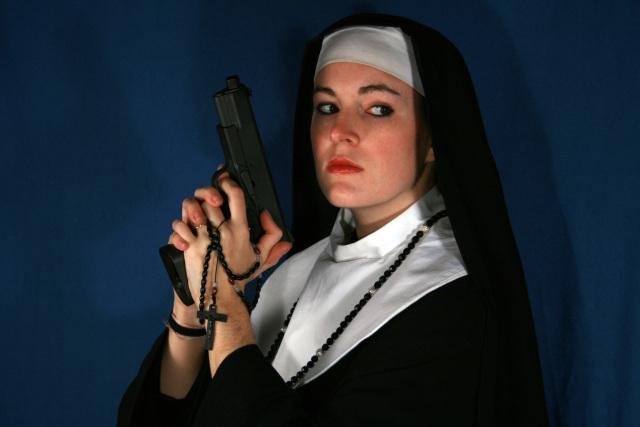 Nun of That (Movie Review)

Over the past twelve months, yours truly has become somewhat obsessed with the gory, madcap action flicks streaming like mutant schoolgirl diarrhea from the inky black depths of Japanese cinema. What began as a passing interested has suddenly transformed itself into a full-blown fanboy crush, an admission that isn't without its embarrassments. I'm insatiable, and my desire to consume all manners of hyper-violent insanity has forced me to turn my twisted interests elsewhere in search of satisfaction. After all, you can only suckle at the same teat for so long before the milk runs dry. Figuratively speaking, of course. Let's not get gross.

Enter writer/director Richard Griffin's outrageously offensive and impossibly cool 2009 action/comedy "Nun of That", a film that is bound to ruffle some feathers regardless of your religious affiliation. It also happens to be intentionally cheesy, decently gory, and, more importantly, thoroughly entertaining from start to finish. It's hard to hate a movie that focuses on a group of vigilante nuns who take down the mob through sheer brute force. And while it doesn't reach the same level of eye-popping insanity as its like-minded Japanese counterparts, it's still a satisfying romp through unchecked tastelessness and wanton debauchery.

Indie darling Sarah Nicklin stars as Sister Wrath, a no-nonsense, tough-as-nails woman of the cloth who finds herself recruited into the Order of the Black Habit after a fatal confrontation with a savage group of heavily-armed hoodlums. Aided by the wisdom and witticisms of Jesus Christ himself, Sister Wrath engages in a short yet fierce training seminar that prepares her for the blood-soaked, pun-filled missions which lay ahead. The fight sequence involving Wrath, a pair of demonic ninjas, and a wise-cracking Gandhi is perhaps my favorite, though it disappears almost as quickly as it arrives. Such is life, I suppose.

After planting an unexpected kiss on the divine lips of her personal Lord and Savior, Sister Wrath returns to Earth, where she is immediately thrust into battle with a putrid, food-obsessed crime boss known as Momma Rizzo. Armed with an array of high-octane weaponry and the abilities granted to her by the forces above, Wrath leaps into action, blasting her way through her arch enemy’s minions in her neverending quest to rid the world of organized crime. As always, someone within the Order itself is working against the Lord’s wishes, and has made contact with the purest evil known to mankind. However, when it comes to double-crosses, Sister Wrath will be having none of that. Sorry, I couldn’t resist.

Richard Griffin, the man responsible for both “Necroville” and oddly enjoyable “The Creature from the Hillbilly Lagoon”, is a purveyor of some of the finest cinematic cheese of the new millenium, and “Nun of That” is easily his finest offering to-date. It’s essentially the American equivalent of a Yoshihiro Nishimura movie, complete with excessive gore, bizarre villains, and a very strange, very deranged sense of humor. Like most films of this nature, the script is just a lousy excuse to string together cheap sex jokes and over-the-top violence, but that’s the nature of the beast. Griffin’s limited budget does show its face from time-to-time, but it never overthrows the picture’s inherent sense of unbridled fun.

At the end of the day, that’s exactly what “Nun of That” is all about: Fun. The religious ribbing might be a little too much for some individuals to withstand, but it’s never outwardly hateful or needlessly mean-spirited. Of course, horny priests and lesbian nuns might not be everyone’s cup of tea, so approach this prickly picture with caution. However, if you’re in the market for a violently funny action flick powered by an exceptionally hilarious cast and several memorably gory set pieces, “Nun of That” should definitely be taken into serious consideration. It’s a great American gore comedy, and sits proudly next to my well-worn copy of “The Machine Girl”. If the Lord is gracious, He will let there be multiple sequels.