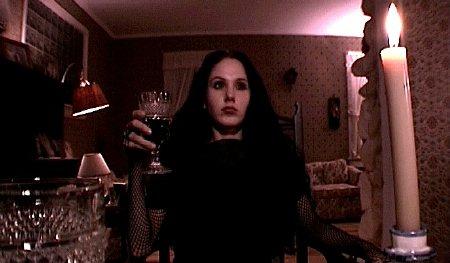 The horror genre, specifically the vampire sub-genre, is home to many low budget horror films. Possibly out striping any other genre for commonality and accessability, the internet is home to a multitude of them. With the number of conventions and film festivals across the country that give attention to this sect of filmmaking, it's no surprise. With such a large volume of content however, especially with content that skirts around over used territory, it takes a special film to stand out from the crowd. With Phil Messerer's "Thicker Than Water: The Vampire Diaries Vol. 1", the description on the back of the DVD case may lead you to believe that this just another vampire film; once you sit down and give the film a chance however, you'll find that there is a lot more going on here that gives this biter the legs it needs to pull ahead of the pack.

The Baxters are a seemingly normal suburban family. Daughter Lara is black clad goth teen obsessed with death, vampires and all the trappings you would suspect in such a youth. Helen is the do-gooder of the family; popular in school, good in grades, bright and cheery and the exact opposite of her twin sister Lara. Brother Raymond has issues of his own, obsessed with science and questioning his sexuality and mom, a former Bulgarian figure skater who's career was cut short by injury. Together they make a nice little oddball family circle, tolerant of one another outside of the general cattiness expected of siblings. As the twins birthday nears, Helen falls ill with an unstoppable nose bleed and all eyes point to Lara in search of someone to blame. Helen fails to recover, the family mourns, but not for long. Helen makes her unholy return as family devolves into confusion and turmoil on how to help the once beacon of life for their close knit circle as she comes to terms with her new un-life.

There is no question that "Thicker Than Water" was shot on a shoestring budget. Simple sets and green actors abound in familiar indie fashion. It is not a film meant to wow you however with high end special effects and amazing makeup work. The key to "Thicker Than Water" lies in its plot which is where they manage to stray away from the typical vampire norms. Gone are the romantic trappings of dark beings stalking through the night, in are the fresh angles of genetics and viral infections. Only the tip of the iceberg, the story continues to distance itself from your standard tropes and sets up a nice little mythos all its own.

Stereotype changes are not the only thing at play either. The family dynamic of the Baxters is established early on as a primary focus of the film. After the return of Helen, the focus remains on that dynamic as opposed to strictly on vampirisim and a vampires escapes. Instead we remain looking upon the family as a whole and how they are all affected by Helen's condition. Its this factor that gives "Thicker Than Water" depth and something to sink your teeth into. Generally the affect on family is only hinted upon in a vampire film; Messerer has decided to explore it and expand upon it which is what makes this indie horror film a cut above the rest. Sure, it may not have the high dollar style that you are used to in a Hollywood flick, but it gives a moving story with depth to it that is easy to slide into. Also, the characters are well developed which adds weight to this deconstruction of vampire family.

While the plot was good fun and easy to get into, the film does have some faults. These namely lie in pacing and editing, though they do not affect the overall enjoyment factor much. There are times where the monologues and expositions carry on a touch to long leading to eye rolling a hope to move on. Luckily, they happen fairly infrequently and once past, the story rolls on once again. Feeling perhaps over long by the end, the story remains great, it just feels like it could have been told with a few less words. My only real problem with the film came in the form of two jarring interstials that narrated the plot and jumped us ahead in time. Feeling like an info dump that served only to film in points that they couldn't film, they broke the flow that was established in story telling. They came across as an after thought and didn't necessarily fit in with the timeline of the story that they were moving ahead. The scenes before and after the breaks felt like a cohesive whole leaving me wondering if they were really needed. The first worked somewhat as establishing factor, the last just seemed wholly unnecessary. Despite these, the movie still tells a good story and that's what counts.

"Thicker Than Water" will not be everyone's cup of tea. If you cannot enjoy a low budget film, you may want to avert your eyes. If you can look past this however, you'll find yourself enjoying a solid story with few plot holes, a fresh perspective on the vampire mythos and some good jokes as well. There are some twists and turns in the plot too, all handled nice and subtle. Many films in this indie arena suffer from many problems that will cause you to reach for the stop button the remote. "Thicker Than Water" is not one of these films and proves that good movies don't always have to be high gloss and high sheen.

Movies Like Thicker Than Water: The Vampire Diaries Volume 1

One Cut of the Dead