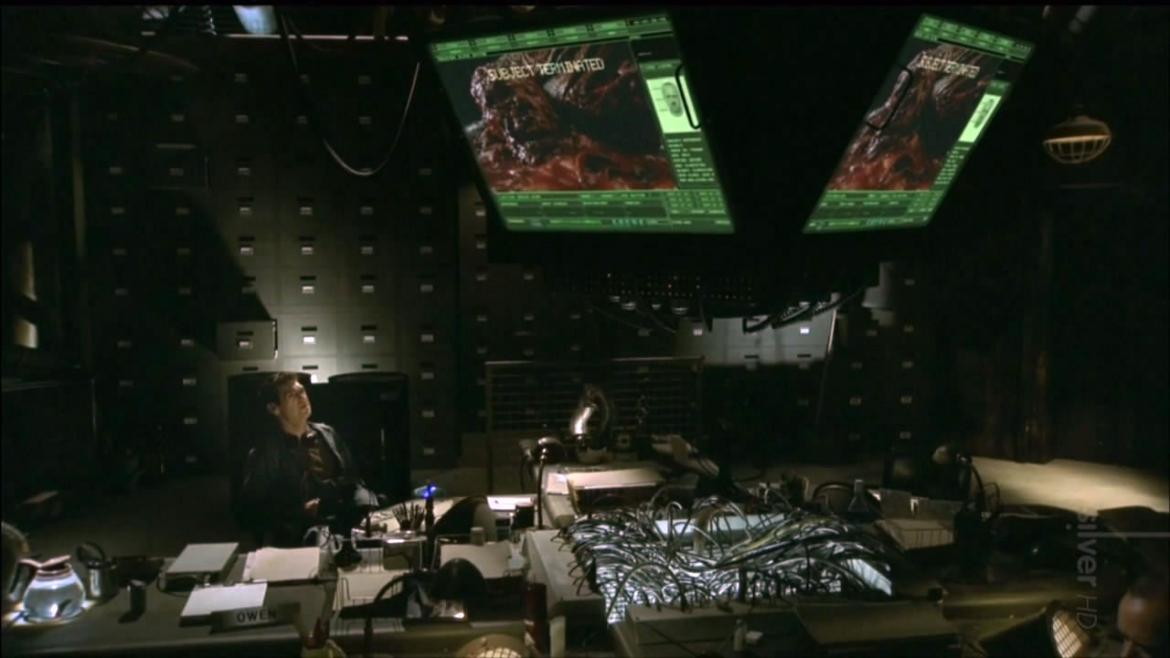 There’s lot to like about Cube Zero, the third and currently final entry in the Cube franchise. Rather than trying to figure out where to take the story following the narrative chaos that was Cube 2: Hypercube, writer/director Ernie Barbarash instead elected to go the prequel route. It’s a wise choice, one that lets him get closer to what viewers liked about the original while still allowing him to spritz a little air freshener into the franchise’s familiar structure, e.g., a group of people try to survive in a murderous cube-shaped prison.

That air freshener comes in the form of seeing life outside the Cube. Until this point, the outside world had only been sparsely interacted with. However, Cube Zero divides its runtime among a new group of Cube-prisoners and a pair of techs whose job it is to oversee the festivities. The techs, Wynn (Zachary Bennett) and Dodd (David Huband), doodle, play games, and speak in hushed tones of “higher ups” while, on the screens in front of them, people fight to stay alive. Eventually, one of the prisoners, Rains (Stephanie Moore), catches Wynn’s eye, leading him to attempt to intervene. This, in turn, causes those “higher ups” to send down Jax (a scenery-chewing turn by Michael Riley), a hammier, one-eyed version of Harvey Keitel’s “The Wolf” character from Pulp Fiction, to set things right.

Besides the fresh direction, this plot device also adds some Meta genre commentary and levity, similar to how we’d see it deployed nearly a decade later in Cabin in the Woods. Somehow it manages to do this while preserving some mystery as to the nature of the Cube. On the downside, spending all that time outside the Cube means less time for what’s going on inside it. Even by Cube franchise standards, these characters here are weak. See, this time around, all of the prisoners have had their memories wiped, eliminating any scenes where they share backstories, etc. The effect is such that everyone except Rains essentially has the word “Obvious Victim” embroidered on their official Cube jumpsuit.

Cube Zero does bring back the problem-solving element of the first film, replacing a numerical code with an alphabetical one. Sadly, its inclusion feels almost obligatory in this case. The characters mention it, but it’s never explored in any meaningful way. It’s simply there because it has to be.

Also coming back from the first film is the Cube’s industrial look and feel. The grittier, more low-tech setting also means returning to traps that make sense and look good. That’s right, Cube Zero takes us back to a simpler world, a world where it’s not necessary to speed up time or alter gravity to kill a person. And what a return it is. Cube Zero is the franchise’s messiest, bloodiest entry, dispatching prisoners with low-tech, but stomach-churning implements like flesh-eating viruses and razor wires.

After an unsatisfying second outing, Cube Zero is a step in the right direction for the franchise. While the film has its faults, it gets closer to recapturing the magic of the original. The end result is a gory, gooey, entertaining, and surprisingly inventive B-movie.