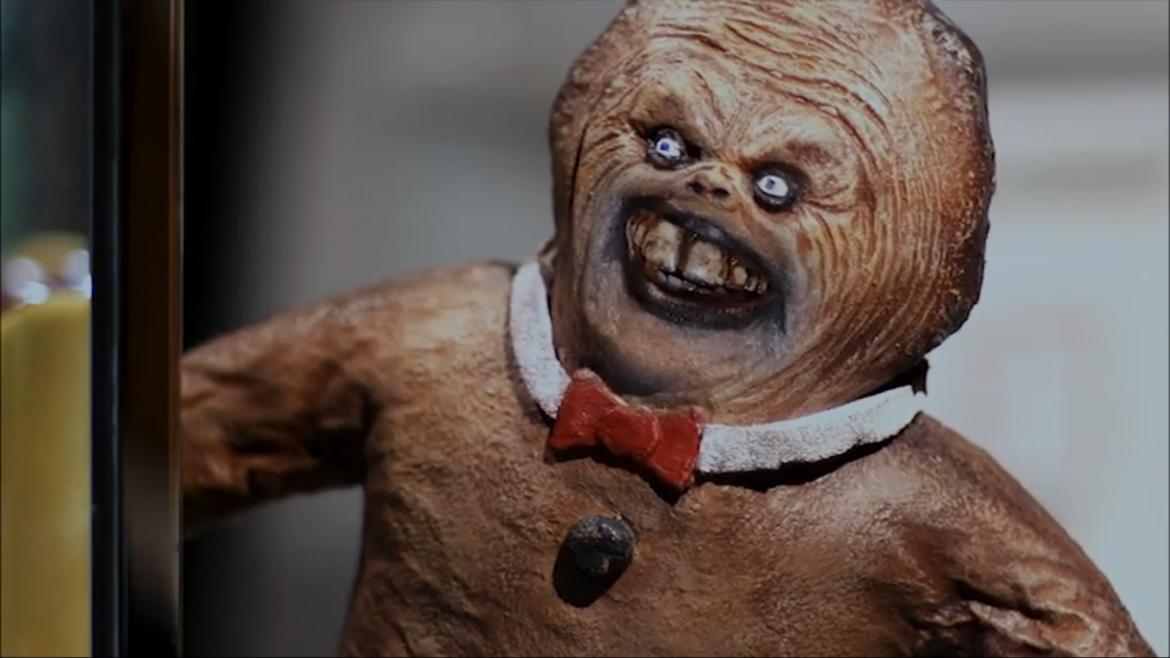 I've watched a lot of awful things simply because Gary Busey was in them. "Celebrity Rehab", "The Apprentice", "Predator 2", "Bulletproof", all have lured me in with the hopes of being able to see Gary Busey at his crazy best. Unfortunately, they all have let me down. Despite the fact that I've been burned pretty much every time I take a spin on the Gary Busey videography roulette wheel, I keep coming back for more punishment. I don't know why I thought "The Gingerdead Man" would be different. Somehow I had convinced myself that a movie starring Gary Busey as a homicidal baked good would be worth watching with some friends and beer. Having now sat through it, I can say with absolutely no hesitation, that this is one of the worst films I've ever watched and might be what I finally needed to see to finally quit my bad Gary Busey movie habit cold turkey. The plot of "The Gingerdead Man" is about as simplistic as it gets. Gary Busey plays a murderer named Millard Findlemeyer (yes, that is actually his name) that is sentenced to death based upon the testimony of our protagonist, Sarah. After his execution, a mysterious woman drops his cremated ashes off at Sarah's bakery in a container labelled "Gingerbread seasoning", which leads to him subsequently returning as a homicidal, one-liner dropping gingerbread man. If you're wondering who the hell this woman is, it's never explained in the film, but luckily the DVD box fills us in that the mysterious woman was Findlemeyer's mother and it was all an elaborate revenge plot to get back at Sarah. If you think that filling a glaring plot hole conveniently with an explanation on the back cover of the DVD box is a sign of incredibly lazy, awful film-writing, you're totally right, but unfortunately, it actually gets worse. You could make pointing out the plot holes and examples of terrible writing in this film into a pretty lethal drinking game if you'd like. Now, I know a movie called "The Gingerdead Man" probably wasn't made with any high aspirations in mind, nor does it really deserve being so heavily scrutinized, but the writing here is just so amazingly lazy that it can't be ignored. Immediately after the cookie is baked, everyone immediately jumps to the conclusion that it's out to kill them all, despite the fact it hadn't killed or threatened anyone. There's a character that's repeatedly referred to as a "tattooed punk" despite not having any tattoos. And then there's my personal favorite part, the fact that the power is supposed to be out for most of the film, despite the fact that every scene is overly illuminated to the point where the flashlights the characters carry around don't do a thing. Writing issues aside, "Gingerdead Man" has much worse problems which make it so unbearable to watch. Thankfully, it clocks in at a brief 70 minutes long, however it's paced so poorly it easily feels three times as long. Even worse, there's a five minute credit sequence to start the film off and the last ten minutes are taken up by an even longer credit sequence, complete with a trailer for the second film (I'd say that was a rather presumptuous move on their part planning out the sequel before the first film was released, but there's a third film in the series, so apparently this is somehow able to support a franchise), so the film itself is really under an hour in actual length. Despite being about as long as an episode of "Mad Men", I still actually found myself fighting off sleep, even while watching this with a group of friends. It's one of the shortest, yet hardest to watch, films. I've ever seen. Now, any film starring Gary Busey with a plot this absurd, demands a sense of humor. It's really the only way something like this could be a success. Despite that fact, this film is painfully unfunny. I think there are some attempts at humor throughout, they're just not funny. At all. It's not even an issue of the humor being painfully juvenile or sophomoric, it's just flat out lazy and unfunny. Pretty much every pun or one-liner is so telegraphed and obvious you could practically write them as the film progresses. Quick, guess the pun that follows a woman getting her finger cut off. Did you guess something that involved lady fingers? Of course you did, it writes itself. And it's still not funny. I went into "The Gingerdead Man" with the lowest of expectations, and this film still somehow managed to fall short of what I had expected. Despite having the promise of at least one good, memorable scene that would have justified the hour I invested in it, there was really nothing here to warrant a viewing. The entire film torpedoed by an overwhelming laziness that permeates every aspect of it. Whenever I walk away from a film like this, I'm left with one question; if the writer, director, producer and actors don't care enough to exert even the slightest amount of effort, why should I care about the end product? The answer is simple, I shouldn't. And neither should you.