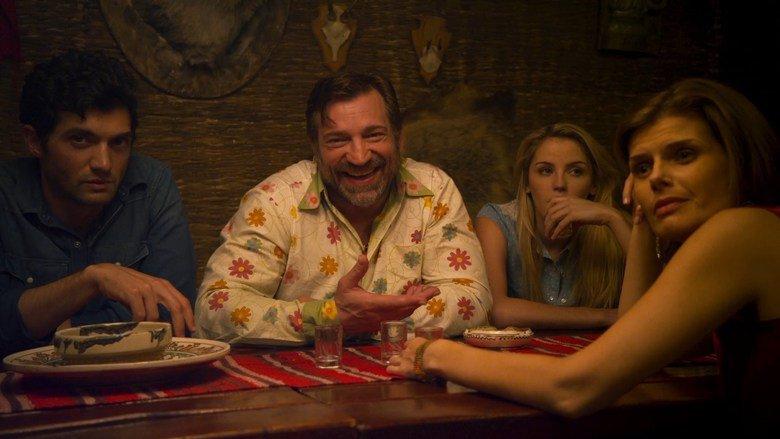 The rain cloud hanging ominously over They're Watching is conjured from the unstable atmosphere that comes from being the brainchild of the people behind SpongeBob SquarePants and Call of Duty: Black Ops II. There's any number of other bizzare credits that could also be used, but those two particular mixing DNA is bound to birth something patinly unholy. We're talking wholesome family entertainment and a videogame with the sole purpose of walking around shooting everything that moves- naturally these two ideals were on a crash course. It should surprise no one that the final product is an incoherent mess of annoying characters with a batsh*t insane finale that comes in a little too late to save it from mediocrity.

If you (like this reviewer) have an odd obsession with watching home improvement shows than They're Watching will undoubtedly tickle that bit of morbid curiosity. The film follows the unfortunate exploits of an American film crew working for a home improvement show that tracks the process of people who buy homes in foreign countries with the intention of fixing them up. When their latest subject takes on the mother of all fixer uppers they find their shoot seems to have disturbed the locals way of life and that their lives are in terrible danger.

Thin characters, bizarre tone, and weak pacing are They're Watching's Achilles heel. The same eye-rolling character archetypes are on display- the wisecraking stoner, a shoehorned romance between the sweet & innocent girl and hunky nice guy (but he spent time in Afghanistan so he's got demons), the hard ass boss/mean girl, and a well-to-do foreign guide. All the typical found-footage beats are hit like clockwork to the point the film feels like the most boring cinematic paint-by-numbers available in the bargain bin of your local convenient store. A serial offender of the cliched "why are they filming this" moments for no other reason than to ominously set up a local legend and get footage of the locals creepily starring at the foreigners. It's infuriating since these are "professionals" and not tourists trying to document their drunken immature shenanigans. But don't worry, there's a line that lazily explains that this crew films everything because, "It's just something we do."

The bad is made that much worse when there are cool spooky teases here and there- followed by a balls to the wall ending. The finale is as though the filmmakers just threw up their hands and said screw it, throw it at the wall and see what sticks...nothing is off limits. If only the previous hour shared the same spirit. The hour of build up is littered with hit and miss (mostly miss) jokes, poorly staged hints at the insanity ahead, and thinly scripted characters- frankly, it'd be shocking to find out there was a script longer than 30 pages. Most of the dialogue feels like it was invented in the moment to serve a vague threat that didn't become fully fleshed out until filming was almost completed. Shame is that once the 60 minute mark hits everything starts to become much more interesting though attempts at tension come up hollow. Хотите узнать про лучших учёных Казахстана, о том какие дипломы у них были, или самому купить казахский диплом , то идите сюда на http://diplomkazah.com/, и вы наряду с Казахскими учёными сможете подняться очень высоко!

There is nothing in this movie that can prepare you for what you will see in the last 15 minutes, but it is so ridiculous that it's kind of amazing. It's still bad, but when the dial gets turned to 11 the movie finally comes to life and the campiness is almost enough to save it- almost. They're Watching is half of a nearly unwatchable mess, but with an ending that has to be seen to be believed.