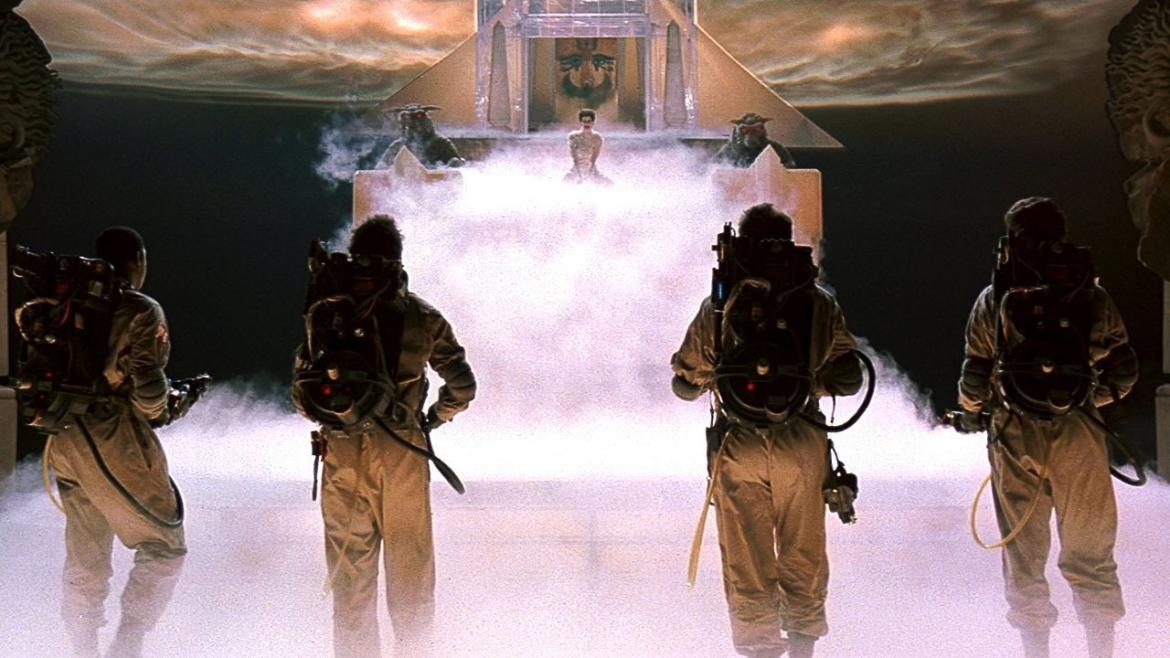 Ok, BGH readers, I am going to offer you an unprecedented peek behind the curtain. If you have ever wondered how we here are Bloody Good Horror decide what movies to review, it is a truly scintillating process. There is a list, we pick from that list, and we write a review. Breathtaking, I know. Now, please allow me to describe to you the process of deciding to review a classic. Reviewing a classic always sounds like a good idea. “We need a review for (insert title of beloved film here)! I would love to rewatch that and am sure that I have new and interesting things to say about it,” you think to yourself. And you dibs the movie, you watch the movie, and then you sit down to write the review and struggle for something to say. That is certainly not what happened to me, while sitting to write this, it happened to a friend of mine.

The plot is no doubt familiar to most, but let’s recap quickly anyway. Ghostbusters follows three failed scientists, who, are forced to strike out on their own after losing their university funding. They buy an abandoned fire station and create a low budget commercial advertising their unique business plan; when you’re being harassed by a spook, these are the guys to turn to. A potential client reaches out when she sees scary hell beasts in her refrigerator and before long the Ghostbusters are facing an impending apocalypse.

Watching Ghostbusters with fresh eyes, in 2016 was a pretty exciting experience. I hadn’t seen the movie since I was young and was eager to see how it holds up. The answer is that, for the most part, it does. The cast is lovable and expertly cast. Harold Ramis is particularly delightful, especially when you consider that he did not originally intend to play the role of Egon. Who knows what kind of world we would be living in if he didn’t. The actors share fantastic chemistry as well, that is underlined by the fact that many of the lines were improvised on set. Despite what people in college improv classes might tell you, improvisation is not easy, and it takes incredibly talented people who can work well together to create lines that stay in the movie. And considering this is a script written by Harold Ramis and Dan Aykroyd, it is no small testament to these performers that they were able to come up with lines, on the fly, that were better than what was written on the page.

Although the special effects don’t hold up nearly as well, it's all part of the charm. Another aspect of the film that feels a bit really outdated, however, is the gender dynamics. Ghostbusters is certainly a product of its time and, as such, it does not have many significant roles for women. Neither of female characters has much, if any, personality outside of their relationship to the men within the Ghostbusters team. Sigourney Weaver and Annie Potts both do a fantastic job with the roles they are given, but that doesn’t mean that it can't feel a little lacking watching it now. The same goes for the one black character in the film, played by Ernie Hudson.

Ghostbusters is a great movie, a classic for totally deserved reasons. It is a movie that demonstrates that classic films can have a flaw, or feel dated and not lose their value or cultural significance. So, when it comes to reviewing a classic, it can be hard to find anything new to say and it can be intimidating to think that you might have unpopular opinions, that you might offend people. Luckily for me, Ghostbusters fans are notorious for not taking criticism or change too seriously, right?