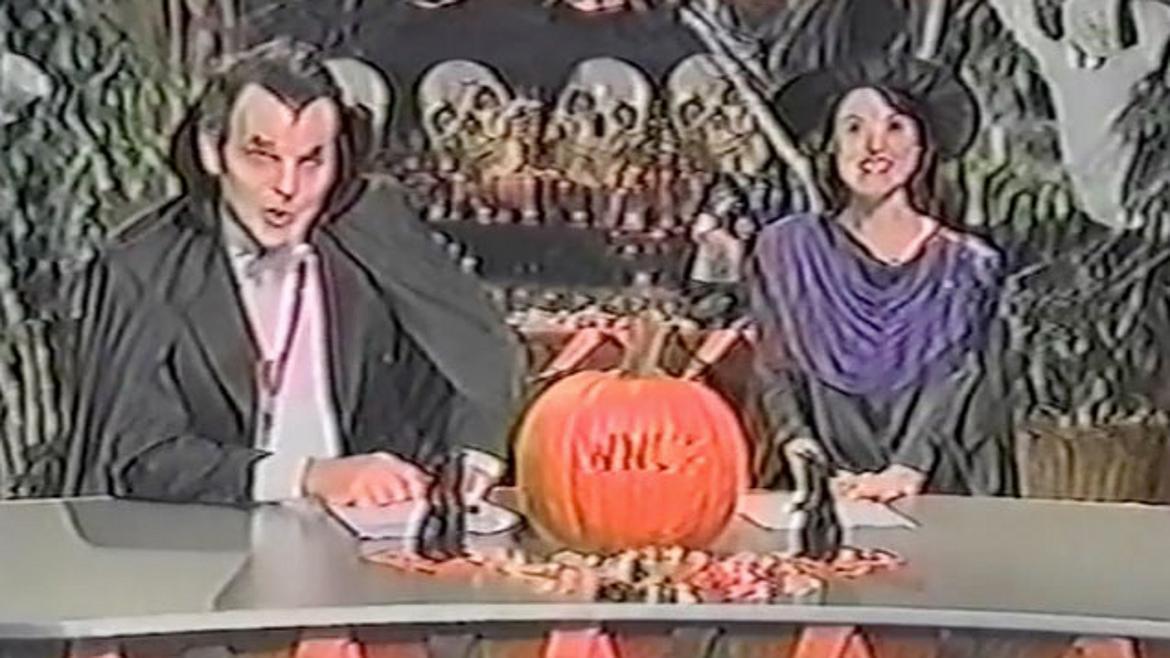 WNUF Halloween Special oozes style and has an attention to detail seldom seen in today’s Hollywood output.  Set in the confines of a worn VHS tape from 1987, the filmmakers made painstaking efforts to make the presentation as authentic as possible.  From minute details such as VCR startup screens and the sounds of a tape being inserted into the player, every ounce of the production is a love song to the golden age of VHS.  The film is loaded with fake local commercials that feel just right through the rose colored glasses of memory. The portrayal of the cast of local news anchors really hits the mark, all the way down to big hair and wooden smiles.  While these kitschy effects are hilarious and feel so right, they soon start to take away from what little story is actually included.

Twenty years before the WNUF Halloween Special aired live in 1987, a local family was slaughtered by their misguided son who was coached by demonic entities through an old ouja board.  A common setup, for certain, but in this special, we’re joining reporter Frank Stewart as he is accompanied by a team of paranormal experts into the house, the first people to enter since that grisly night twenty years before.

WNUF does have a story but it feels a bit anemic, as the filmmakers lean too heavily on their fake commercial gimmick.  While the commercials are fantastic in their detail and recreation, much like real life, there’s just far too many of them.  Just as you begin to get into the spooky goings on in the haunted house of the TV special, we are dropped to yet another series of fake commercials, time and time again. The humor wears thin after awhile, even to the imaginary viewer who is watching this supposed VHS tape.  We even see this person fast forward a number of times.

The oversaturation of the commercial aspect is unfortunate, because the happenings in the estate house that are plaguing Frank Stewart and company are legitimately entertaining and spooky.  We get a solid build of tension from beginning to end, interspersed with a good balance of humor as we watch the awkward reporting of Frank Stewart and his ham fisted method of trying to control the spiraling chaos around him.  Everybody from the paranormal investigators to the news anchors working the lead in news desk are on par for the time periods, to make the old timey VHS recording gimmick feel life like.