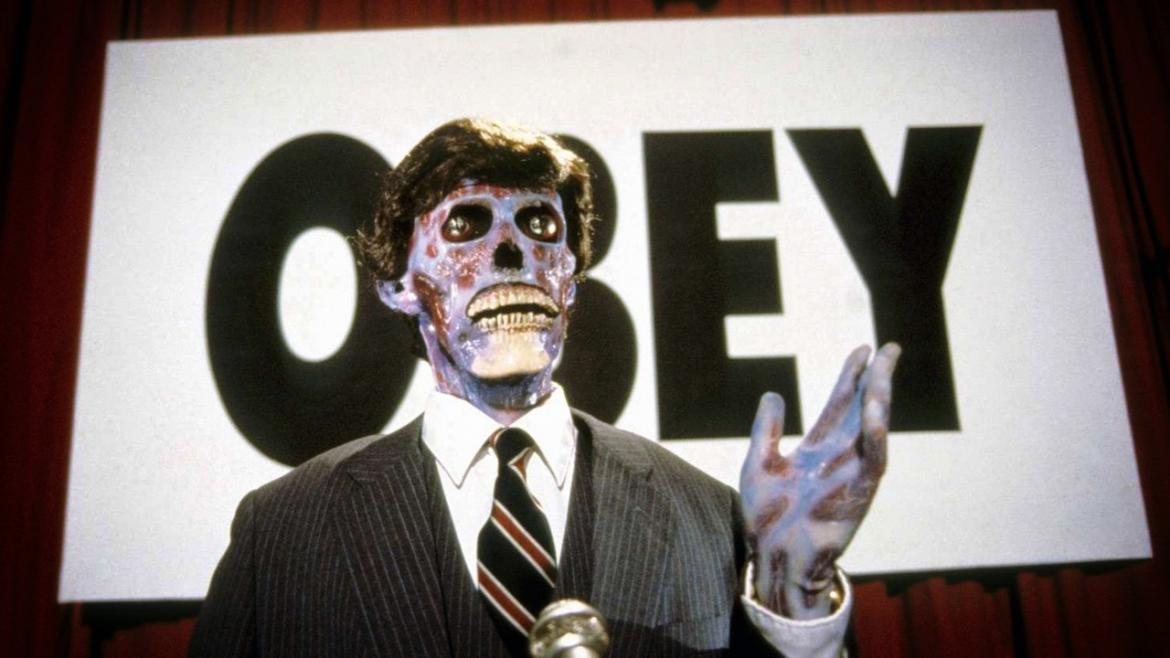 Unemployment’s on the rise and anxiety is spreading throughout the country as the drifter Nada (“Rowdy” Roddy Piper) train hops his way into the outskirts of Los Angeles. It may be a set up ripped from the headlines (then as now), but background chatter from street preachers and the homeless hint at violent social changes outside the realm of the normal. Blurring the lines between the real and the unreal is requisite for any horror movie, but They Live spins the looking glass all the way around, suggesting in the most literal way possible that our rampant consumerism is more than an opiate for the masses: it’s a carefully constructed screen keeping the disenfranchised from seeing a reality that’s insanely more sinister.

Nada is the ideal gateway hero for his place and time. An able-bodied white man who finds a job on his first day in town, he dismisses the pessimism around him and sticks up for the American Dream. “I’ll deliver a hard day’s work for the money, I just want the chance,” he tells his new pal Frank (Keith David). “I believe in America. I follow the rules.” But an underground sect of rebels holed up across the street from their tent city have a very different understanding of the world’s troubles, and are desperately trying to broadcast their gospel to everyone else (a rundown church as the center for revolution against the backdrop of the glitzy LA skyline is one of the film’s best touches). After a police raid sends the rebels further into hiding, Nada discovers a--well--box of sunglasses that opens his eyes to what’s really going on (it works, trust me).

What Nada sees is a bleak reality stripped bare of the billboards, glossy magazines, and posh one-percenters that make up America’s glamorous background noise. In its place, the gray landscape is covered with signs saying things like: “CONFORM”, “MARRY AND REPRODUCE,” and “OBEY.” It turns out the wealthy and powerful are, in fact, hideous decaying ghouls who have been controlling humans with fascistic messages disguised as advertising. It’s a spectacular set piece reminiscent of EC Comics circa Tales from the Crypt, and when Nada is unable to hide his terror, the ghouls realize their gig is up and summon the authorities.

Once Nada is on the lam, They Live descends into a self-aware spoof so fast your ears will pop, and it’s probably more for these scenes that the film has attracted its large body of fans. “I’m here to chew bubblegum and kick ass...and I’m all out of bubblegum,” and “Life’s a bitch, and she’s back in heat” are here, and an absurdly (and I mean, stupid-ridiculously) long fistfight between Nada and Frank is more famous at this point than the film itself. But this change in mood works; sticking strictly to its message for the full runtime could have become grim and preachy. Still, nothing comes close to the initial sequence of Nada’s awakening for its originality and style.

We usually knock movies that are too obvious in making their point, and I don’t know how you can be more obvious than having your hero discover that all advertisements secretly say OBEY and CONFORM in giant block letters. They Live pulls it off in part because of its goofiness, but also because it’s about how easy it is for us to overlook what couldn’t be clearer. It’s for these reasons that a film so purely of its era that I am legally obligated to write RONALD REAGAN at least once in this review remains exciting and relevant even now.