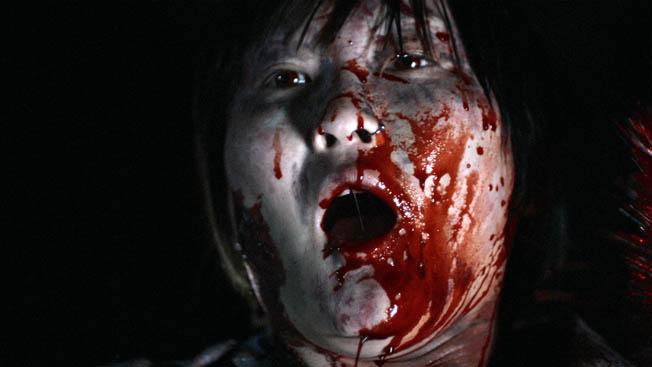 Having already endured two impossibly lame torture flicks from this year's After Dark Horrofest -- Anthony DiBlasi's "Dread" and Joey Stewart's "The Final", specifically -- I wasn't really looking forward to sitting down with another entry in this overwhelmingly wonky series. I completely understand what After Dark is trying to achieve -- bringing so-called "original" horror movies to the masses in one easily-marketable package -- but the films they tend to gravitate towards are, for the most part, no better than the countless productions released outside of their gimmicky banner. This probably says more about the current state of horror than Lionsgate's ability to pick a winner, though I'm not entirely sure I'm willing to give them the benefit of the doubt.

Not to be confused with Kevin Grevioux’s comic series of the same name, Kevin Hamedani's entertaining 2009 undead comedy "Zombies of Mass Destruction" isn't exactly a horror movie, which makes its inclusion in the After Dark universe a bit perplexing. There are zombies, yes, and the gore is occasionally profuse, but nothing about the picture is remotely frightening. At it's core, "ZMD" is a relationship flick, it's time divided between an Iranian-American girl's struggle to find her place in a post-9/11 world and a gay guy's quest to boldly proclaim his homosexuality to his conservative mother. The common ground between the stories is the zombie apocalypse, which government officials believe to be a blatant act of terrorism.

The more intriguing of the two plotlines belongs to Frieda (Janette Armand), an American of Iranian decent who is under constant scrutiny from the bigoted, narrow-minded denizens of her hometown. As the zombie outbreak intensifies, Frieda reluctantly takes refuge with her socially-awkward childhood friend and his deranged parents. The father, convinced that the poor girl has played some sort of role in this supposed attack on the American way of life, ties Frieda up in his basement in hopes of coaxing the truth out of her. This sequence, while laced with inky black humor, is much more mean-spirited than the rest of the film, and, as a result, feels a little out of place. Of course, my opinion may have a lot to do with my utter disdain for torture horror, so make this critique what you will.

Despite my personal preference, the adjacent storyline is anything but boring. Sadly, the situation subscribes to a number of clichés and stereotypes involving gay culture that are, at this stage in the game, a little played out. The sequence involving Tom's mother following their ill-fated "coming out" dinner is pretty hilarious, though it too feels as if it were written after a week-long marathon of "Will & Grace". One thing eventually leads to another, and the happy couple find themselves seeking shelter inside the township's blissfully ignorant church. The congregation is quick to extend a helping hand, that is, until they learn the specifics of their visitors' lifestyle. The ensuing sexual reassignment scene is, perhaps, the film's sharpest moment.

Regarding zombies: There aren't a lot of them. As you can tell from the limited descriptions I've provided, the living dead and their insatiable appetite for human flesh aren't the centerpiece of the film, and as a result, the number of scenes containing ghoulish violence are surprisingly low. However, this isn't necessarily a problem if you're willing to accept the picture for what it is. Allowing yourself to get sucked into the respective fates of the main characters is essential for maximum enjoyment, especially if you're expecting a convoy of zombie-related splatter. That's not to say that "ZMD" is lacking in gore -- far from it -- but the infrequency of such material may irritate certain viewers.

"Zombies of Mass Destruction" isn't a bad film, per say, but it probably isn't going to sit very well with hardcore zombie fanatics who feel story always comes second to carnage. What's more, the picture requires temperamental American audiences to take a self-deprecating look at themselves from the viewpoint of two different sets of minorities, a task that certain individuals may find intolerable. Most people don’t find national paranoia or religious hypocrisy particularly funny these days, especially when the entire presentation is nestled in the shadow of one of the most horrifying days in history. “ZMD” boldly uses its zombie outbreak as a backdrop to raise important political and social issues in a way that’s both biting and thought-provoking. Romero should be proud.