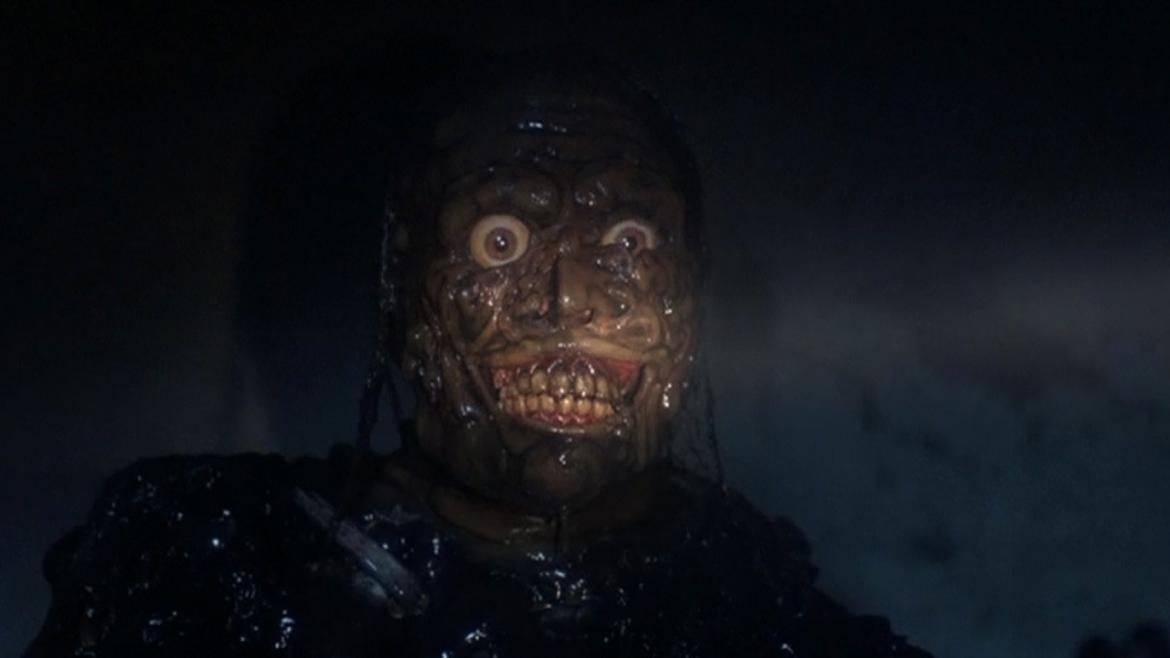 In a word: no. In two words: fuck no. There is absolutely no reason for this film to exist. “Return of the Living Dead: Part II” (from his point forward, “Part II” for brevity’s sake) does absolutely nothing to distinguish itself from the first film. In fact, it’s essentially the same film, with few variations here and there. You’ll find everything that was in the original film in the sequel. Two of the actors return and play characters that are essentially identical to their characters in the original (to the point where they even begin to quote identical lines of dialogue), the “Tar-man” zombie returns, the zombie outbreak is caused by a chemical created by the US Army, a good portion of the movie takes place in a cemetery, there are attempts at humor (allow me to reiterate, attempts, not actual humor), characters go through the stages of death when becoming zombies, it’s all here. It’s the same fucking movie. It’s completely pointless.

Now, this doesn’t always need to be a bad thing. “Evil Dead II” is essentially a remake of “The Evil Dead”. However, “Evil Dead II” succeeds by introducing the element of slapstick humor into the mix. It also adds upon the original story, expands the universe of the film series and fleshes out the back story. “Part II” does none of that. There is no new ground explored in this film. The only thing it really adds is child actors, and let’s face it, I’m pretty sure no one has ever seen a movie and then thought “I liked that, but I really hope the sequel has child actors”. Get ready for it, the first 30 minutes of this film revolves around these child actors. And they can’t act. At all. Ultimately, there’s nothing in this film that expands upon the original. It’s completely pointless.

Another area where “Evil Dead II” succeed over the original is that they film-makers knew that there would be no tension in replicating the build up of the first film in the sequel. Other successful sequels like “Dawn of the Dead” also jump straight into the action. “Part II” doesn’t. Despite the fact that anyone who has seen the original film (AKA, the market for this film) knows that the gas containers will reanimate dead flesh, will get into a graveyard and cause the dead to rise, the film takes more than a half hour to re-establish all this. If you’ve seen the original, you’ll find yourself banging your head into a wall waiting for this film to pick up. There’s no point in re-establishing known facts. It’s completely pointless.

The original “Return of the Living Dead” was a legitimately funny film. More importantly, the humor in the film felt organic and wasn’t forced. The film played with the concept of zombies that had been well-established prior to it’s release and found humor by turning those concepts on it’s head. The first time we expect a corpse to slowly shamble out of a doorway and instead are greeted by a nude man sprinting across the room, it’s funny. When the bisected dogs in the medical supply warehouse reanimate, it’s funny. The sequel attempts to be funny, but fails spectacularly. Instead of having humor organically rise out of the situations and characters, the film has some half-assed slapstick thrown in here and there. It’d be funny if I was five and still found Looney Tunes funny. But I’m not, I don’t, and it isn’t. It’s also not funny when characters are referencing how this all seems familiar and begin to directly quote the original movie. It’s not funny, that’s a major problem with the film. The humor in this film fails miserably. The only time I chuckled, the humor was completely accidental. The film ends with the zombie horde being electrocuted, and let’s face it, watching people act like they’re being electrocuted is pretty funny in an unintentional way. Even then, the film-maker had to try to be funny, and threw a zombie “Thriller”-era Michael Jackson into the scene, which completely ruined what accidental humor that was there. Not only it this movie not funny, the humor actually makes it worse. It’s completely pointless.

“Return of the Living Dead” was also a very well-made film. The special effects were great and the soundtrack was incredible. If you’ve seen the movie, you’ll always remember the punk rock song in the film and the fantastic score. “Part II”, not so much. The special effects aren’t as good. Whereas in the original, the zombies look other-worldly and like they were actually rotting, here they look like people in makeup. It’s difficult to truly evaluate as the home video release has a different score due to licensing issues, but the music in this film does not fit the mood at all. There are parts that almost make the movie feel like some goofy children’s movie and just flat out confused me. There’s other times when the movie seems to be trying to replicate the original film’s score, but sounds like some generic “Punk Rock Song #12” picked out of some public domain library. Allow me to continue to beat this dead horse, it’s completely pointless.

I’ve said it five times, but I’ll say it again, this film is completely pointless. It does absolutely nothing to differentiate itself from the original “Return of the Living Dead” other than be terrible. Even worse, it didn’t even try. To be totally honest, if I wasn’t reviewing this movie, I would have shut it off after 30 minutes (the things I sacrifice for you loyal readers). I tend to be pretty harsh on sequels, but there really is no reason at all for this film to exist, other than to try to make some cash for the studio/film-maker. If you’ve never seen the original film, by all means, seek that out and watch it. It truly is one of the classics of this genre. But I cannot find any reason at all to suggest this film. There are no redeeming aspects to it all. Don’t even bother.

Movies Like Return of the Living Dead: Part II