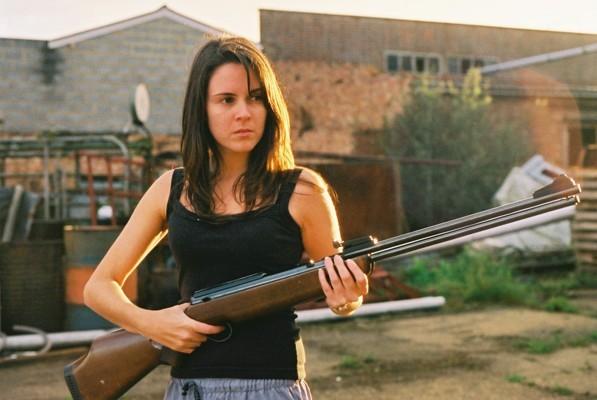 “The Zombie Diaries” is a bird’s eye view of the events during and after an apocalyptic viral outbreak. We have three separate groups we’re following throughout; “The Outbreak”, “The Scavengers”, and “The Survivors”.

With our first group we follow a film crew as they set off into the countryside to film a documentary on the outbreak. In “The Scavengers” we watch a group of three people a month after the outbreak as they simply try and exist. In “The Survivors”, we come across a large group of people gathered together for safety and trying to work a plan to keep themselves safe to build a strong hold.

This all sounds magnificent in theory; post zombie apocalypse, rebuilding, surviving. In actuality, this could have indeed been the case. With little to no character development involved in the movie and too much cinema verite shaky cam, it was nearly impossible to keep up with which group you were watching or what was going on. We are thrown into each group rather abruptly with nothing but a brief exposition as to what they’re doing. For the two smaller groups, this pretty much kills any cohesiveness to the story. Only with the larger group do we actually get some meat to bite into as far as characters and story go. The leader of the farm has some smart touches written for her; insisting that everybody wash their hands before they go in, disinfecting your shoes in bleach poured on the ground before entering the house to prevent the virus from being tracked in. She even keeps a small but believable knot of survivors around here. At one point in “The Survivors” focus, we see one of the farm tenants panic at the sound of movement in the brush and begin shooting blindly. Upon closer inspection we find that she’s shot two uninfected people. She runs off screaming, the weight of what she’s done is allowed to sink in to us the viewer. But…they never do anything else about it. Do we see what they do to her for killing two innocent people? Do they let her go? Do they forget about it? Your guess is as good as mine.

It’s this lack of character depth that makes it nearly impossible to care about what happens to anybody in this movie. There is nobody to root for, no emotional connection, and barely any physical recollection to them. The first hand mock-u-mentary style horror film as been done to death now, and it does work. It should even lend itself to the zombie genre quite well. With “Zombie Diaries” it works for the most part but manages to destroy any tension or atmosphere that it has built as soon as any action starts. The camera shakes so much that you simply can’t see what is going on every time a zombie appears on screen. When one of the scavengers yells to his cohorts “Oh shit, I think I saw something over there”, the camera soon begins shaking so violently that you cannot focus on anything in the shot to see if he did in fact see something. I do understand that you’re going for realism and cameras shake when you run. This is great for realism, but hard to watch as a viewer. When we can’t focus or make out anything that is happening on screen, it soon becomes pointless.

Aside from these two main issues, “Zombie Diaries” is completely standard and does nothing to elevate itself over the rest of the zombie movies that choke the shelves of video stores everywhere. In fact, there is so little zombie mayhem in this movie it’s rather boring. Nothing but strung together scenes of people talking and smoking with the occasional zombie staggering through a cornfield. I had high hopes; unfortunately those hopes are left unfulfilled.