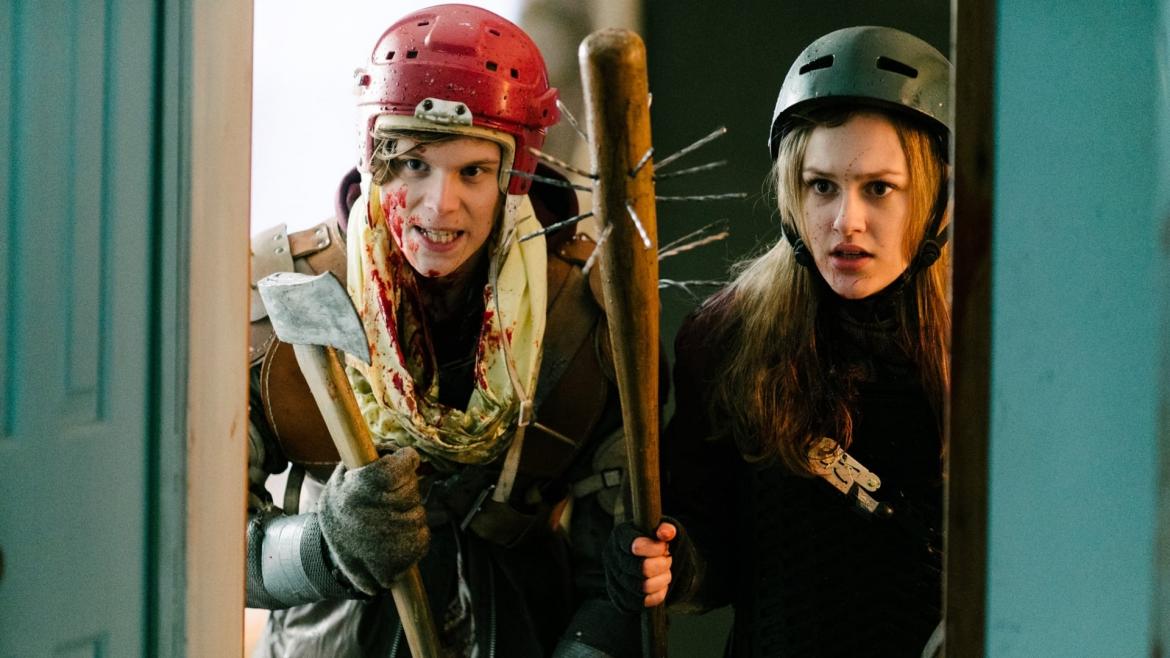 No matter if it's a dead serious grimfest or straight schlock it seems every time a new zombie movie comes out there is a quest for relevancy. From inception, filmmakers have to choose how they will answer an audience that has "seen it all before." I'm not completely willing to say Dead Shack is here to buck that now longstanding tradition, but it's Amblin-esque zombie shenanigans are just different enough for those who've abandoned ship on The Walking Dead and written off countless brain scarfing excursions.

Forgoing the easy opportunity to over-explain the idea, Dead Shack trades lengthy info dumps and character exposition for an emotional intense situation that speaks for itself. Following brother and sister combo Colin and Summer (Gabriel LaBelle and Lizzie Boys) who, along with Gabriel's bestie, Jason (Matthew Nelson-Mahood) take a trip to a dirty cabin lodged in the woods (found on Craigslist) near an isolated small town with the siblings’ father, Roger (Donovan Stinson) and his new girlfriend. While out exploring they make a horrifying discovery that their nameless neighbor (Lauren Holly) lures young frat boys to her home, drugs them and feeds them to her undead family. Since the vacationers have seen too much, they are next on the menu.

Director Peter Ricq keeps the pace brisk which acts as both a pro and con. On the pro-side, the film runs lean with not a lot of wasted seconds to be accounted for. In doing so some of the characters are short changed which undercuts some of the potential for even more of a dramatic wallop in the film's final act. We get a good sense of the family dynamic at play between Roger, Lizzie and Gabriel. Roger is the immature teen who had kids too young, never quite grew up and wants to be his kids' friend rather than their dad. Meanwhile Lizzie and Gabriel bond begrudgingly as the put-upon teens who love their dad but are also embarrassed by his antics and the fact that they are poor. Jason is the shy friend with the hots for Lizzie, but never had his time to shine and show he's got a pair till now.

Lauren Holly's character, the neighbor, is the biggest question mark. We know she's tough as nails and has had to do the unthinkable for years--abandon morality to feed her zombified loved ones. We don't know how long this has been going on, how it happened in the first place or how the hell she gets away with it. Considering she's got a burn pile full of valuables from various victims, clearly ditching evidence wasn't in her repertoire. Not knowing all of her back story isn't a necessity in understanding her character, but in terms of making her a sympathetic villain, there should have been a little more characterization that allowed viewers to feel some empathy for her motivations and provide a little more complexity to choosing sides in the final act.

Boosted by its decidedly immature sense of humor and kids-in-over-their-heads adventure, Dead Shack is complimented by its modern synth score and a theme that's sort of It Follows Lite. Humorous gore gags and absurdly crude characters inexplicably provide just enough of an emotional enough to give this undead throwback a strong heartbeat on the verge of springing new life into the zombie subgenre.