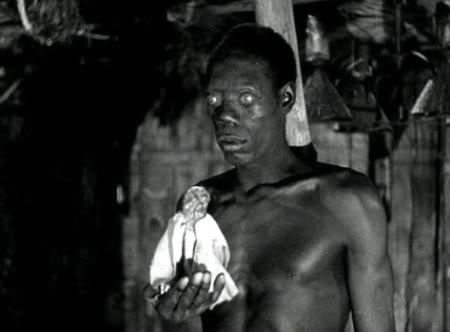 I Walked With a Zombie (Movie Review)

Zombies are so omnipresent in modern horror movies that it’s easy to forget that the shambling (or sprinting) hordes of brain-craving undead as we know them they are a relatively modern invention. Before “Dawn of the Dead” and the Italian zombie flicks of the 70s, most people would associate zombies with Caribbean islands and voodoo ceremonies. Even the original zombie movie “Night of the Living Dead” never refers to the creatures as zombies, but rather as “ghouls”. While there are dozens of Romero-style zombie movies made every year, other than the occasional effort from “The Serpent and the Rainbow” or, erm, “Weekend at Bernies 2”, the classic voodoo zombie, as seen in “I Walked With a Zombie”, has mostly been relegated to the abandoned shopping mall of history.

Legendary producer Val Lewton headed up the B-horror unit at RKO in the 1940s. For each film he produced he was given a lurid studio-selected title, a budget of $150,000 and a 75 minute running time. His first film, “Cat People” was a surprise smash hit, earning him the artistic freedom to make brooding, existential horror stories which often had little connection to the sensationalist titles he was provided with. His 1943 follow-up to “Cat People” was “I Walked With a Zombie”.

When writing the screenplay, Lewton took a series of nonfiction articles about voodoo rituals and combined them with the basic plot of “Jane Eyre” to create the storyline of “I Walked With a Zombie”. The film follows Betsy, a Canadian nurse who is given the job of caring for the wife of a sugar plantation owner on the Caribbean island of Saint Sebastian. Betsy’s arrival on the island plays almost like a tropical reimagining of the opening chapters of Dracula. She is told of the island’s history of slavery and a statue called “Ti-Misery” which currently stands on the grounds of the plantation owner’s estate and was made from the figurehead of the slave ship which brought the ancestors of the island’s black residents.

On her first night in the plantation house when Betsy hears a woman crying she leaves bed and meets a woman dressed all in white walking as if in a trance. She learns that this is Jessica, the woman she has been hired to care for, who is in a permanent catatonic state. She also learns that the crying was from one of the black maids because a baby has been born and due to the miserable history of their people they have developed the strange ritual of crying at a childbirth and celebrating at a funeral.

Betsy tries her best to use her medical training to revive Jessica, to no avail. When she hears that a voodoo priestess has been successful in similar cases, she takes a spooky journey to the houmfort, the source of the voodoo drums she has heard in the night, where she is shocked to learn the true identity of the priestess and has to wonder if the voodoo is just superstition or truly magic.

Classic films of the 30s and 40s often are difficult for modern audiences to enjoy. The pacing is often slow, the dialogue hokey and the acting much less naturalistic than we’re used to. “I Walked With a Zombie”, though, is possibly one of the easiest and most entertaining movies for modern audience to watch. The story moves along at a brisk clip and the melodrama is certainly present, but it is more engaging than overwrought. The ending is also not the neatly wrapped up happy ending that you might expect. Perhaps most remarkable for a film of its time, though, is the sensitive way in which the issues of slavery and race are handled.

The sins of the past loom heavily, but all the characters are treated with respect and dignity. The black characters not only don’t speak in dialect but are also portrayed as just as cultured and mannered as their white employers. It’s typical to approach movies like this expecting to wince a few times at the racism of bygone eras but it is both notable and commendable that “I Walked With a Zombie” can have racial strife and slavery as major themes but still never stumble into territory that might be questionable to a modern audience.

Anyone interested in exploring historical horror films would find a good starting point in “I Walked With a Zombie”. It’s never boring, has a surprisingly modern outlook, and a few scenes, particularly the late night walk to the houmfort, are effectively creepy even today. The voodoo music as well is memorable and hypnotic and completely the uniquely poetic tropical gothic atmosphere of the film. This is a film that deserves its place in the canon of classic horror and is as watchable today as it was 70 years ago.

Platoon of the Dead