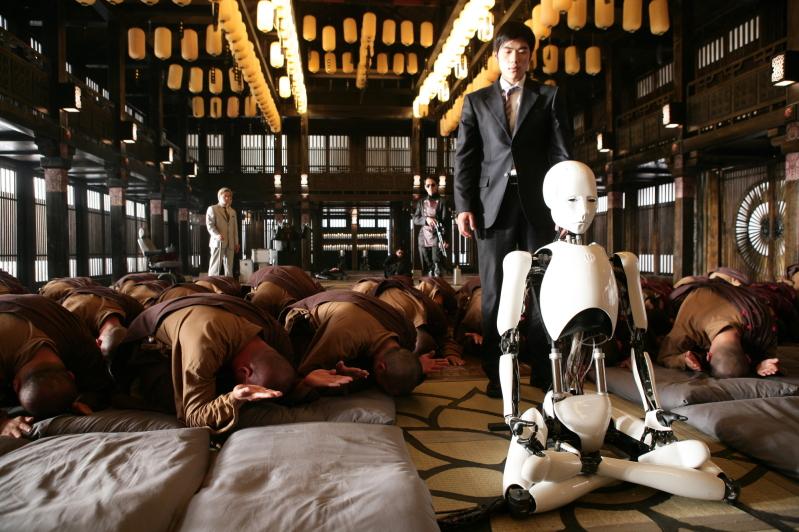 Doomsday Book is a South Korean anthology film from directors and co-writers Kim Ji-woon and Yim Pil-sung. Through the course of three, forty-five minute segments we are pulled through the final moments leading to possible apocalyptic events. Literally translated to English the title reads “Report on the Destruction of Mankind”. Though the subject matter may call to mind a host of grimly violent, depressive, and stomach churning cannibalistic fare (see what I did there?) the segments are nicely balanced with a healthy dose of humor and hope. And while the balancing of tone and narrative interests keep the shorts lively the film as a whole occasionally crushes itself under its loftier attempts at profoundity.

Directed and written by Yim Pil-sung “Brave New World”—which has nothing to do with Aldous Huxely but who’s counting?—centers on the bookish Yoon Seok-woo (Ryu Seung-beom). Dripping with all manner of vestigial nerdery his vulnerability is made even more explicit as we watch him clean out the sloppy remnants from his family after they’ve abandoned him for a seaside retreat. The universe seems to align when Seok-woo ends up on a blind date with the beautiful Kim Yoo-min (Go Joon-hee). But after a virus caused by infected cow meat spreads across South Korea, the two find themselves in a world where corporeal impulses are uncontrollable.

“Heavenly Creature” from Kim Ji-woon focuses the tumultuous transition of apocalypse to a more interior subject matter as a humanoid robot in the near future seems to have attained Buddhist enlightenment. Technician Park Do-won (Kim Kang-woo) is called to the temple in order to determine if the robot, named Brother In-myrung by the monks, is defective. Do-won’s encounter with the robot slowly blurs his understanding of what it means to be human and/or machine. This uncertainty comes to a head when concerns surrounding the robot’s intentions result in some potentially dangerous (or benevolent) consequences.

Lastly is Yim Pil-sung’s “Happy Birthday” in which a young Park Min-seo (Jin Ji-hee) orders an 8 ball for her father’s pool table to replace the one she had broken. Flash-forward a couple years as a larger asteroid is speeding toward Earth and Min-seo’s family is readying a fall-out shelter. As the object nears the planet the family watches social veneers melt away and last minute home shopping channels try to make one last buck. But when scientists reveal some odd markings on the asteroid Min-seo realizes she may know more about the object than anyone on the planet.

Anthology films often suffer from a lack of cohesion between their narrative voices, both in terms of content and style. However the play between the three segments in Doomsday Book evenly balances their inherently grim subject with a humor that is both broad slapstick and pointed media satire. Indeed the term “anthology” is particularly apt in this case as the three narratives work to comment on the underlying anxieties of maintaining and fostering humanity in a world enveloped in media and lived through technology. In “Brave New World” a rather typical zombie apocalypse scenario lampoons a hedonistic world of literal and mediated consumption. Glaring, gorging close-ups of food slosh and squish between teeth only to be replaced by couples tongue sucking while Yoo-min insists on capturing every moment with her cell phone camera. “Happy Birthday” satirizes the supposed objectivity and impersonality of mass media and news coverage. Juxtaposed with the awkwardly and whacky relationship of the Min-seo’s family the stream of information seems pallid by comparison. “Heavenly Creature” on the other hand takes a more stoic and academic approach to the material, mostly favoring quite Aristotelian conversations on the nature essence and perception. But while the narrative treads in some well traveled waters—recalling Blade Runner specifically in its final moments, it benefits from a slightly detached yet tender approach.

Though a majority of Doomsday Book’s humor and occasional tender moments work, a few segments suffer from the lack of clear resolution or finality—odd given the subject matter. This is particularly evident in the “Brave New World” segment. Early in the film we watch as the cause of the viral outbreak—a moldy apple—is tracked from Yoon Seok-woo’s apartment garbage to a cattle feed lot where it mutates into a hybrid mad-cow disease. At first this appears to plays into the renditions of mass-consumption and impulsive behavior. However by the end of the segment a tableau recalls Adam and Eve in Eden while a quote from Genesis fills the screen. The implication here being that the new paradise is a complete loss of human control and the eventual destruction of civilization. It’s an awkwardly employed injection of cynicism that bares no weight on what the segment seemed to originally ponder.

Doomsday Book is a light jaunt of a film. For the most part the direction is either flashy as it needs to be or remains absent, allowing the more stagey aspects of the humor or existential pontificating play out. Its meanderings on humanity in a technology saturated world may not require a depth of investigation but the film does offer a balanced program for the light-hearted philosopher and fantasy enthusiast.