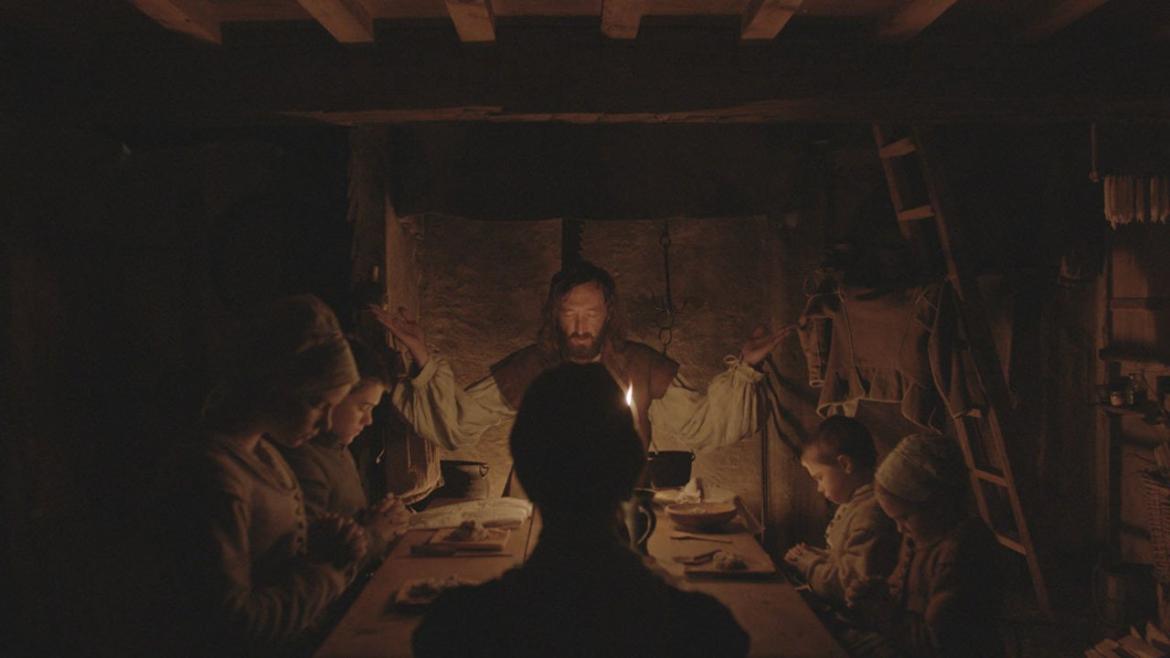 If we’re being honest, the plot of most horror movies are based on legendary tropes or local lore of somewhere; Whether it’s the haunted house you’re told to avoid or a variation of the Boogie Man that stalks the night – the clichés are reused and readapted for modern consumption. Rarely are audiences invited to experience the beginnings of such legends, until now. Though black magic and witches were known in Europe and other eastern lands, Robert Eggers’ The Witch transports us back to the naïve and staunchly Puritanical New England countryside, circa the mid 1600s, where religious fervor reigned, unforgiving.

Banished from the Puritan plantation for disagreeing with the townships’ view of proper religion, William and Katherine pack up their children and belongings to start anew outside the confines of the fenced community; Eventually, finding themselves building a farm plot on the edge of the wood. Though they have most everything they need to survive, the family immediately starts to experience the pressure of continuing a pious life outside the safety of their community. The film focuses on their eldest daughter, Thomasin, who is budding with puberty, angst and apathy towards farm life. While tasked with caring for her infant brother, she engages the baby in an innocent game of peek-a-boo that unfortunately ends abruptly when the child disappears into the woods by some unseen force.  As the family reels in the aftermath of the disappearance, Thomasin increasingly becomes the focus of the family’s grievances and suspicions. Though her younger fraternal and obnoxious twin siblings are seen terrorizing the homestead and even conversing with the family’s creepiest goat (all things that would be huge offenses in the Puritan manual) it is Thomasin who is accused of witchery and blamed for the tragedies that have befallen the family. As Thomasin accompanies her brother Caleb into the wood to find food and more in hopes to smooth the ripples of the family, they are forced to understand the “Witch of the Wood” is more than just a children’s rhyme.

Subtitled as “A New England Folktale,” The Witch relies heavily on this aspect of its origins. Using authentic dialogue from researched accounts and paired with an incredibly realistic set and costume design, the audience is engulfed in a period piece of paranoia and dread rather than a straightforward horror show. With little to no (depending on how skittish you are and if you have an affinity for bleating goats) jump scares, The Witch builds with the slow burn of an actual story plucked from the oral traditions of yore mixed with the unsettling realism of America’s religious obsessions. Eloquently woven within the usual lessons of dangerous blind faith and ignorance, we are presented a coming of age story (like most fairytales) where the female character’s being, as well as her intentions, are called into question since she has recently become an adult woman. Though The Witch does introduce us to real witches, it’s almost more appalling to experience the terror of familiar betrayal Thomasin experiences as she is established as an ‘of age' woman.

Eggers’ major film directing debut is grounded with Game of Thrones alums Ralph Ineson and Kate Dickie, as William and Katherine, but is driven by newcomer Anya Taylor-Joy as Thomasin. Gracefully balancing the naivety of childhood innocence and obedience against the growing self-awareness and confidence of an adult, Taylor-Joy is captivating to watch. The years of intense and acurate research pay off-as Eggers' depiction of Puritanical New England is bleak, harsh and even more unforgiving than it's occupants. Also, The Witch’s depiction of Satan is cleverly introduced through symbolic animals and unnerving to witness as it unfolds. The few negatives of the film seem to lie in the archaic (though historically accurate) vernacular and intense British accents of the actors that make the dialogue difficult to understand at times – and the pacing of the plot could become tedious if you’re not prepared, however, The Witch still delivers the chills.

Taking the story back to its very much humble beginnings, Eggers is able to strip the atmospheric terror bare (quite literally) and rehash the paralyzing fear of the unknown (and horror of female sexuality) that drove the infamous Witch Trials and transcend the modern audiences’ expectation of blatant gore and cheap scares.  The Witch as a film does its source material justice and continues to haunt you long after the credits roll and is likely to loom, darkly, in your mind like the scary stories passed down from generations past.